Pros and Cons of Tesla 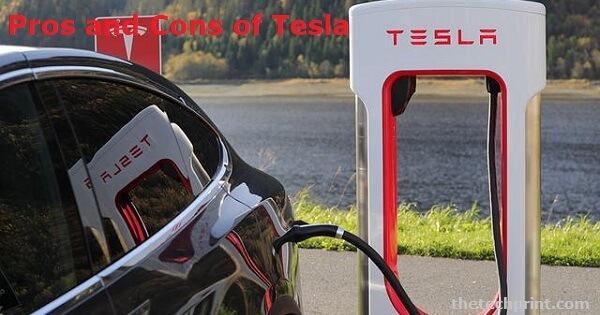 After manufacturing the fastest electric cars, Tesla's focus has now shifted to full self-driving. All new Tesla cars have the hardware needed for full self-driving in almost all circumstances, at a safety level we believe will eventually be at least twice as good as the average human driver. In addition to consumer vehicles, Tesla also provides electric vehicle powertrain components and systems to other vehicle manufacturers. But as an investor or consumer, there are still some pros and cons of Tesla you should consider. This article specifically focuses on electric cars by Tesla.

What are the Pros of Tesla?

Tesla is constantly innovating and pushing the envelope for electric car technology. This has helped them develop some of the most advanced cars on the market today. Tesla's technology is not to be scoffed at. The app is highly useful, and Tesla strives to keep its vehicles' software up to date. This means that adjustments are wirelessly transmitted to your car without you having to do anything.

The enormous touchscreen on the center console eliminates the need for fiddly buttons or knobs, and it's very sleek-looking. Sentry Mode ues cameras as well. Furthermore, Tesla is currently working on Tesla Autopilot, a more advanced driver-assistance system released in the future.

2. Positive Environmental Impact is among the pros of Tesla

Because Tesla vehicles are electric, you'll be saying goodbye to filling your car with gasoline in no time. This has the secondary benefit of saving you money on gas. Electric vehicles have a smaller environmental impact than traditional cars because they produce significantly lower amounts of pollution and, as a result, cities have considerably cleaner air.

Even though Tesla cars are expensive, they have a lower running cost than internal combustion engine cars – that is, cars that run on gas or diesel. Although it's a beautiful piece of machinery, you'll want to ensure that the vehicle is in good working order before buying. Given the lower fuel costs, this expenditure is still balanced out by savings on gasoline. According to a recent study on the Tesla Model S battery, it retains 94% capacity after years of usage; therefore, you shouldn't have to worry about replacing it unless you're abusing your car. This can be considered as one of the biggest pros of Tesla in the long-term.

The supercharger is Tesla's charging network for customers new to the brand. You'll use a Supercharger station to charge your vehicle - they're easy to find using the Tesla app. The app will notify you when your car is ready after approximately 30 minutes, and you may go. Furthermore, because you won't need to buy or maintain extra fuel, using this option is considerably more cost-effective than fueling with petrol. According to Tesla, using a Supercharger costs only £0.28 per kilowatt of power compared to an anticipated petrol expenditure of £1.20 per liter for a 42mpg automobile.

If you're considering a Tesla but worried about the high initial purchase price, auto financing might be an option for you. The auto financing parties one of the main pros of Tesla to consider when you have tight budget. You can take out a loan to cover the cost of the car and make monthly payments until the loan is repaid. This way, you won't have to come up with all the money upfront. Just shop around for a competitive interest rate and repayment plan before committing to anything.

What are the cons of Tesla?

You may have many good reasons to buy a Tesla EV, but there are some cons of Tesla you must consider. Some of these include:

1. Tesla is still not great for long journeys

Tesla will definitely check all of your boxes if you're searching for an automobile that can be used as a city transport vehicle. On the other hand, if you require something that can withstand extended journeys, their electric cars might have some limitations. You'll need to plan your trip based on the number and location of Tesla Superchargers available. Furthermore, you'll have to consider how long it will take to charge your car.

Tesla owners can use public chargers, although you'll only get 20-25 miles of range per hour of charging. This compares to 150 miles in 20-25 minutes at a Tesla Supercharger. Teslas have longer ranges these days, but they may not be the ideal car for you if you're making long trips regularly.

2. Like every EV, Tesla also struggles in Extreme cold

You already know this if you've ever driven an electric vehicle, but electric cars aren't as efficient in cold weather. This is because electric automobiles produce very little heat, unlike internal combustion vehicles.

Even with these improvements, the battery has proven to be a significant limitation. There are ways to work around it – such as using heat pumps - but only the Model Y Tesla offers this out of its cars. In other vehicles, there is a heating system that can be activated. This will certainly reduce the car's overall mileage, and you'll need to fill it up quickly.

3. Price is among the most common cons of Tesla Cars

The Tesla Model 3 will set you back a pretty penny. You'll likely pay twice as much for the Tesla Model 3 as you would for a comparable gasoline-powered vehicle. Teslas have a well-deserved reputation for being pricey; the initial price does not include add-ons like extra seats, the Subzero Weather Package, an improved sound system, or Smart Air Suspension.

Yes, your Tesla's software will be upgraded as new updates are released automatically, but the car itself – i.e., the hardware – will not. Eventually, you could discover that your software is too complex for the vehicle, similar to your phone. Aside from that, Tesla has an insufficient supply of automobiles on hand; so if you want a new Tesla, expect to wait anywhere between 8 and 12 weeks.

You don't want an accident, yet it happens. It is sometimes the driver of the other automobile's mistake. Even a minor repair may be very expensive if you get into a collision in your Tesla. A little ding might cost you upwards of $7,000. If your Tesla gets sideswiped, the cost could rise to as much as $50,000. And it's not just a joke; there can be more cons of Tesla cars than you expect.

You may go to this Tesla wrecking yard website to determine whether they have any wrecked Teslas for sale. If you look closely at the repair costs of each of these Teslas, you'll notice that they cost more to repair than a new one.

Tesla insurance is quite expensive. You will need to get comprehensive collision coverage and uninsured and underinsured motorist protection to be fully insured.

There are a couple of reasons for this:

Conclusion pros and cons of Tesla

Tesla is a company that has always been at the forefront of technology and innovation. They have brought electric cars to the mainstream and change how the world thinks about transportation. However, they have also had their share of problems. From purchase to maintenance costs, you must consider all the pros and cons of Tesla before deciding whether it's a good investment or not.

What are the negatives of owning a Tesla?

A Tesla's disadvantage is its high price. It isn't cheap. Elon Musk understands this, so he promised to bring out a $25,000 Tesla automobile in three years. The most affordable Tesla is the $38,000 Standard Range Plus Model 3, with a range of 155 miles.

What are the pros of buying a Tesla?

Saving money on gas, spending less time at the repair shop, outstanding road safety, and a stress-free driving experience are just a few advantages of buying a Tesla. It's no secret that electric cars will soon dominate the automotive industry; Tesla's fleet of elegant, quick, and cheap vehicles is leading the way.

Do Tesla cars have problems?

There's a widespread issue with Teslas developing rattling in several vehicle sections. Owners have taken their cars to service centers numerous times for this problem, but very few people have witnessed it fixed.

Do Teslas save you money?

Tesla Model S has an electric charge cost of $.037 per mile (which is around the cost to charge your Tesla at home), putting you at a distance of 15,000 miles for $555. Yes, the gasoline savings with a Tesla are significant.