Pros and Cons of Solar Panels

Solar panels are the backbone of every solar energy system. If you scale the pros and cons of solar panels considering their types, each one has its own. Monocrystalline, Polycrystalline, and Thin-film solar panels scale differently on the parameters of efficiency and lifespan. But the principle they work on is all the same. Solar panels work by absorbing sunlight with PV cells and converting it into electricity. The PV cells are usually made of silicon, a material that is found in sand.

When sunlight hits the PV cells, it causes electrons to be knocked loose from their atoms. This generates an electric current that can be harnessed to power electrical devices. So working with all the types of solar panels is the same. Now, let’s come to their applications along with the pros and cons.

Solar panels have a wide range of applications. They can be used to power homes, businesses, and even entire power grids. Solar panels are also being used in various consumer products, including calculators, watches, and portable electronics chargers.

What are the pros and cons of Solar panels?

Considering the pros of solar panels? Think that they are the preliminary requirement for every type of solar system. Thus, they have many benefits.

1. Reduce the cost of energy bills

The most well-known benefit of solar panels is that they will decrease your energy expenses. Because you will be generating your own power through the sun, you will eventually consume less power from the grid. This allows you to spend less money on electricity while still saving money on your power bills.

Due to the sun's power being replenishable and free, you will not be charged for the energy generated by your solar panels. There are several advantages to having additional cash each month to spend on your family or other activities. One of the most significant pros of solar panels is saving money. And governments incentivize people to use solar energy; it’s a step to save the government’s resources as well.

2. Increase the value of your home

Solar panels can increase the resale value of your home. According to the National Renewable Energy Laboratory (NREL), a dollar saved through solar energy equals an increase in your home's resale value by $20. Given that the lifespan of solar panels is 25 to 30 years, savings could be much higher if they are maintained timely.

3. Low maintenance is one of the common pros of Solar panels

A Solar panel system is designed to last for decades with little to no maintenance required. As said above, most solar manufacturers offer warranties of up to 25 years and will often cover any maintenance costs that arise within that period.

Solar panel systems do not produce any harmful emissions or greenhouse gases. They are completely clean and renewable. Solar power is also a very efficient way to generate electricity, as it uses less energy than other methods such as coal or natural gas.

It’s relatively easy to install a solar panel and it can be done by anyone with basic do-it-yourself skills. There are many online guides and instructional videos available to help you through the process.

Renewable energy is a type of power that cannot be used up. The sun produces a lot of energy all the time, and your solar panels can collect it without running out. On the plus side, solar being renewable means that everyone may use free sunlight to generate electricity.

You won't have to worry about your solar panels' power running out, but you will be able to enjoy the rays that strike our solar modules and create free, pollution-free energy. Solar power is also a renewable resource, which means it does not produce any greenhouse gas emissions.

What are the Cons of Solar Panels?

Several problems can occur with solar panels, such as high costs, maintenance issues, and inefficiency. Solar panels are also often difficult to install, and severe weather conditions can damage them. Some other cons of solar panels include:

Solar panels are expensive, and not everyone will be able to afford them. Although we may argue that solar panels are now the most affordable they've ever been... They do, however, have a cost.

Unfortunately, solar panels have one disadvantage: they are costly. The future, on the other hand, is bright, as costs are coming down. Solar panels currently cost a lot of money; nevertheless, with new government plans and cutting-edge technology, the price is continuing to lessen.

2. Dependency on Sun is among many cons of solar panels

Solar panels only create energy when light is absorbed and converted by the panel. When the sun isn't shining, solar panels don't produce electricity. Solar panels are designed to work best when they're directly facing the sun, so if the sun is behind clouds or isn't out at all, the panels won't be as effective. Additionally, solar panels need to be kept clean to absorb as much sunlight as possible. If they're covered in dirt or snow, they won't be able to produce as much electricity. If it's night-time, there won't be any sunlight for the panels to convert into electricity.

Solar power is not suitable for all applications; so is the story with solar panels. For example, it would be very difficult to use solar panels to power a car or an airplane. Solar power is also not well suited for applications that require a lot of energy, such as factories or office buildings.

5. Not Suitable for All Climates

There are a lot of factors to consider when decision between the pros and cons of solar panels. These factors include your residence, how much sun exposure your home gets, and what kind of budget you have allocated for renewable energy solutions. That said, solar is becoming more and more affordable every day, so it’s definitely worth exploring if it’s an option for you. 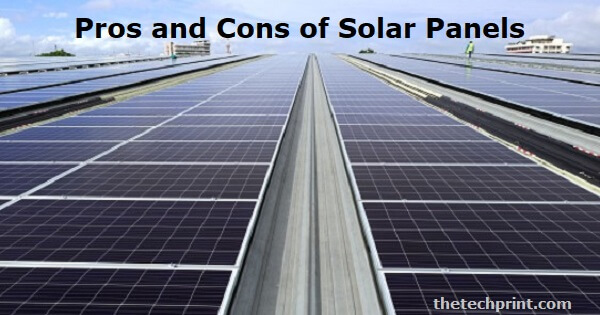 How many solar panels do I need to completely power my house?

A typical home requires between 20 and 24 solar panels to offset utility expenses. The number of solar panels you'll need is determined by a few factors, including location and panel specifications.

What is the price of 1 solar panel?

The average price of monocrystalline solar panels (the most energy-efficient option) is between $1 and $1.50 per watt, between $6,000 and $9,000 for a 6kW solar panel system (also known as a solar system).

How long do solar panels last?

Solar panels, often known as photovoltaic or PV modules, are designed to endure for more than 25 years. Many solar panels installed decades ago are still functioning at the expected capacity. Solar panel longevity has improved dramatically in the last 20 years; not only is solar panel durability remarkable, but so has its life expectancy.

Is buying solar panels worth it?

When you live in a high-energy-cost region with a suitable solar rating and can afford the upfront investment, it's worth putting solar panels on your house. At the same time, the 26 percent tax credit is still valid — for the environment and your wallet. However, don't expect your power expenditure to go away immediately.