Pros and Cons of Blockchain

If you are also tempted by investing in cryptocurrency, you just need a thorough knowledge of the Pros and Cons of Blockchain. Where Bitcoin, Dogecoin, Ethereum, Litecoin, etc., have become the new way to transact, many countries still find blockchain technology suspicious. The review presented here inspects further benefits and risks of blockchain technology for investors and governments.

A little About Blockchain Technology

Blockchain is a digital ledger of transactions, which are also called blocks. It allows for peer-to-peer financial transactions without the need for an intermediary, such as a bank. Each transaction or block in the blockchain is linked to previous blocks, creating an endless chain of data.

This secure data provides easy access to information on the owner of any given bitcoin, where it came from, and where it went. The blockchain is transparent, which means that it's viewable by anyone.

Bitcoin is a cryptocurrency, a digital asset used to transfer value from one person to another. The online ledger that bitcoin uses is known as the blockchain. Using this technology makes it easier and safer for people to trade these bitcoins with each other without having to rely on someone else, such as a bank or clearinghouse so that bitcoins can be transferred directly from person to person globally.

As of September 2021, more than 100,000 merchants and vendors accepted bitcoin as payment, including Microsoft, Dell, Expedia .com, and Overstock .com. with the US, Canada, EU, and El Salvador giving a go-to cryptocurrency use.

Blockchain is a complex topic, and it's hard to know where to start. There are many misconceptions about blockchain technology, but the reality is that it can change how business is conducted. The positive transformation of businesses tempts many to look at the pros of blockchain.

The blockchain is decentralized, meaning it's viewable by anyone. In addition, it makes audits easier since there are no centralized records to be audited by revealing all transactions in an audit trail.

2. Security is one of the considerable pros of Blockchain

It's easier to prevent hackers from accessing information when data are stored everywhere instead of in one central location. In addition, blockchain data is more secured by a military-grade encryption algorithm to save important documents using several servers or computers that store blocks of code that contain the timestamped batches of recent valid transactions.

If a hacker attempts to edit any record, each computer will have the latest version and alert others to invalidate all transactions involving them since they may have been compromised.

With traditional banks, you need to wait for business days for transactions to clear. With blockchain technology, the blocks are added in chronological order. This means that if you purchase with your traditional bank, there is no way of knowing how long it will take for your transaction to be verified unless you check with the bank or use an app that updates on real-time status.

Typically banks charge fees for transactions made via wire transfers and international payments, which can become costly depending on their financial institution. Blockchain ledgers provide secure transactional settlements at less cost than traditional banking systems.

How great would it be to have your financials managed by a tightly secured and automated system? The decentralized nature of the blockchain makes it easier to keep track of all records so companies can have better record management since this technology creates digital data storage that's secure from hackers.

Some Cons of Blockchain Worth Considering

The blockchain is decentralized, meaning if a system failure occurs, you lose all data connected to the particular block being hacked. For this technology to work properly, several servers or devices must have the latest version of each code batch in every block, which obviously requires time and cost. Some other cons of blockchain are aligned for your further consideration.

Nothing happens manually in blockchain; the system depends entirely on electricity and internetwork to operate. As a result, a minor glitch in the system can ruin billions of dollars worth of business in a moment. Since many banks haven't approved of the technology, the future of blockchain is yet to determine.

Blockchain has the potential to be disruptive and is already disrupting certain industries, but it also faces disadvantages. The technology is still in its infancy stage, so there are fewer use cases than other technologies such as cloud computing or IoT. It’s also important to note that blockchain can only work with cryptocurrencies, limiting its application even further.

3. Quality programming is needed to Operate and secure blockchain

Ubisoft, SoluLab, ELEKS, Labrys, Adoriasoft, Idealogic, Talentica Software, OpenXcell, Cubix, and InterScale are top blockchain technology companies. More businesses are projected to collaborate with these companies in the nearing times. There is a serious consideration to be made, though, in terms of integrity and security.

Blockchain companies need programmers with specific skills and knowledge of this new technology, which can be difficult to find. In addition, you'll need to train employees on how to use the software and devices associated with blockchain.

Even though blockchain is secure by design, it can be quite confusing for people without technical knowledge. For example, it’s basically impossible to hack immutable data blocks that are copied across the network of distributed nodes. Still, since most users don’t understand how the technology works or what makes it so secure, they often rely on third-party not as safe or trustworthy applications.

Cryptocurrencies such as Bitcoin, Dogecoin, Ethereum, etc. have received a lot of attention in the blockchain community, which means that other uses for this technology are sometimes ignored. However, there's potential for growth when it comes to this new technology in many industries, including manufacturing, healthcare, and government.

Keep in mind the pros and cons of blockchain or implementing this technology. Most companies need to employ technical support staff who understand how to use and enforce decentralized software applications (dApps). In addition, blockchain developers will continue to be in demand as more companies switch from conventional databases to decentralized ledgers. 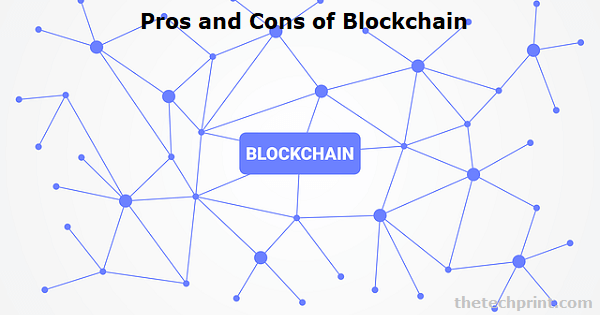 Is blockchain the future?

The future of Blockchain technology will have a significant impact on how we live and work. The global Blockchain market is anticipated to reach $34 billion by 2026, with a growth rate of 45%.

The blockchain fee is the cost of conducting a cryptocurrency transaction, which users charge when they execute such transactions. The payment is used to process the transaction on the network and is collected to do so. Therefore, the less expensive your transaction's priority in the blockchain network, the lower your blockchain fee will be.

What companies do not use blockchain?

Even in the face of ever-growing excitement surrounding blockchain, one might not be blamed for doubting its potential as a revolutionary paradigm. Unfortunately, Facebook, Amazon, Google, and Apple are just a few firms that aren't utilizing blockchain very much, even though it has a lot of promise.

Can you break blockchain?

The blockchain promises unbreakable data security in today's technological environment, but that will change once quantum computers arrive. Blockchain security is based on math problems that are extremely challenging even for the most powerful conventional PCs to solve.