Pros and Cons of Robots

Imagine a machine that can perform managerial tasks, handle heavy industrial equipment, or even manage day-to-day chores at home. Robots have long been known only for their usage, but they are now very much a part of many organizations. So the future looks even brighter for this marvel of artificial intelligence. But what about critical-level tasks such as examining issues, making better judgments, monitoring team performance, and even creating objectives? This is where you need to go through the pros and cons of Robots first.

What are the Pros of Robots?

Seeing their ability, it's crystal clear to understand what pros of robots there can be and how they can help humans in healthcare, industrial, and commercial facilities. Here are some positive sides of robots that you can experience in the very near future:

In many cases, robots can do things more precisely than humans. For example, identifying tumors in the healthcare sector to spot industrial-level errors. As a result, they can work for longer hours without getting tired and make fewer mistakes.

2. Cost-effectiveness is one of the clearer pros of Robots

The cost of buying and maintaining a robot is lower than hiring a human worker.

Robots can be quickly programmed to carry out new tasks as required.

Robots can replace humans working in hazardous environments. This would minimize health risks and accidents at the workplace.

When a task is to be done repetitively, using a robot is often more efficient. For example, if a company manufactures the same product day in and day out, it makes sense to use a robot on an assembly line. This eliminates human error and saves time, adding another factor to the pros of robots.

What are the Cons of Robots?

On the other hand, some cons of robots must be considered as well:

One of the biggest cons of robots is their high initial investment cost. Not all companies can afford to buy them. Since a lot goes into manufacturing an AI-based machine that can act like humans, the costs of building one depend on equipment and the complexity of programmed instructions.

The population is exploding at the moment, as replacing the workforce with robots sounds even more distressing. As robots replace human workers in various industries, there will be large-scale unemployment. This would lead to social unrest and could even cause political instability.

Robots can only do what they are programmed to do. They cannot think out of the box and come up with creative solutions.

4. Reliance on technology is one of the known cons of Robots

As humans become increasingly reliant on robots, they will lose the ability to carry out simple tasks. This would make them completely dependent on machines, and if they malfunctioned, it would cause widespread chaos.

Robots can only do things when given precise instructions. Once the commands have been delivered, the robots will begin to operate. However, they are unable to think for themselves. Therefore they are unable to deal with a crisis if one occurs.

One of the most significant drawbacks of robots is that they lack emotions. As a result, they cannot empathize with humans and can only perform tasks based on logic. This could lead to problems in areas such as healthcare, where empathy is essential.

Conclusion on the Pros and Cons of Robots

As you can see, robots have both pros and cons in real life. While they can be extremely beneficial in many ways, you must also be aware of the potential problems they may cause. Therefore, it is important to carefully consider these factors before deciding whether or not to introduce robots into businesses or homes. 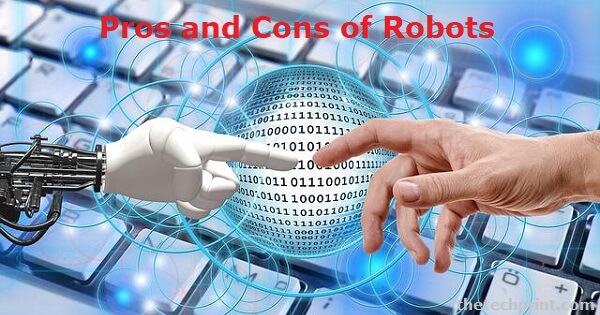 What are the pros (drawbacks) of robots?

Robots can increase productivity, efficiency, quality, and consistency of goods in many industries: Unlike humans, they are not bored. They may do the same task day in and day out without complaint. They can work faster than humans and don't require breaks. They have better fine motor skills than humans and can work in environments too dangerous or difficult for humans. For example, they can be used to defuse bombs.

Are Robots Worth investing in?

This is a difficult question to answer. It depends on the particular application, the competition, and many other factors. Robots have been very successful in some cases, while others have not. In general, however, robots are becoming increasingly common in the industry as companies seek to increase productivity and efficiency.

What are the negative effects of robots?

The researchers discovered that for each robot introduced for every 1,000 workers in the United States, earnings decreased by 0.42%, and the employment-to-population ratio decreased by 0.34%. In other words, a single robot added to the factory floor can displace up to three workers.

Are robots good or bad?

Robots are an excellent method for implementing lean ideas in a business. They save time by allowing them to create more items. They also cut costs because they don't require breaks and can work in difficult or dangerous environments. The disadvantages are that they can put people out of work and need an initial investment.