Pros and Cons of Metaverse

In 2021, the popularity of Metaverse as a concept skyrocketed, following several major tech firms making big statements in support of it. Facebook changed its name to Meta intending to create its own Metaverse as one of the most notable events that sparked worldwide talks about possibilities with Metaverse. Many other technology giants, such as Microsoft, Epic Games, and NVidia, are also jumping on the Metaverse bandwagon with creative ideas. With its popularity continuing to rise, interest in the pros and cons of the Metaverse has begun to pick up steam.

What are the Pros of Metaverse?

These are some Pros of Metaverse or the virtual reality which would bring to our world. Everyone should appreciate technology like this because it has given us access to information and experiences we never thought possible.

Meta verse won't be such an open-world like Facebook where everyone can view your activities and know everything about you. Some of your friends may have restricted privacy on their part, which you can accept or deny, depending on what they are willing to share with you.

2. Virtual World Environment is one of potential pros of Metaverse

With the help of Oculus Rift, users will be able to experience a different virtual world environment interactively. But this would only come in the future when the technology catches up.

Unless Facebook opens itself entirely to other social media platforms, there won't be too many apps that people use outside Facebook coming into Metaverse directly. However, developers are encouraged by Facebook to create different social media apps for Metaverse. Once these are available, your choice of using them is completely up to you. Plenty of apps will also bring many pros of Metaverse to the users.

With Facebook gradually converting itself into a virtual world, a high degree of privacy is offered to users. Even if you have to share information with your friends on the social media platform, it can be restricted to what they want to view or hear from you through your avatar. You could communicate without having much information about yourself shared on the Internet by others.

5. Customization of your Avatar

With all the information you share with others, there is a certain degree of privacy risk unintentionally. But with avatars, you can restrict this by restricting what other people can see about you through your profile. Once this becomes available in the virtual social media world, Facebook will convert itself into Metaverse without any trouble.

What are the Cons of Metaverse?

There are a few potential drawbacks of Metaverse. For example, it could potentially isolate people from the real world. And could be used for cyberbullying. Some of the Other Cons of Metaverse are as follows.

It will become a full-time job to do anything since there are virtually no limitations (e.g., creating art, music). This can be seen as both a pro and a con since people can gain immense satisfaction from doing this, but it might prevent them from doing the things they actually want to do (e.g., play video games, watch anime).

There is literally no privacy whatsoever. This is both a pro and a con since you can do whatever you want without being censored, but people may exploit children or harass others. This problem is eventually going to end up as one of the possible cons of Metaverse for many.

People can't portray themselves in the Metaverse how they are physical. This is both a pro and a con since people can gain respect for others based on their skills instead of what they look like.

4. Loss of Employment Among Predicted Cons of Metaverse

It's possible that many people could lose their jobs since they are no longer needed (e.g., construction workers). This is both a pro and a con since people can have time to do other things, but they might not have enough money to survive.

People can become so addicted to the Metaverse that they neglect their friends or other responsibilities. This is both a pro and a con since people can gain immense satisfaction from the Metaverse, but it might prevent them from spending time with their families or doing things they actually want to do.

Conclusion on the Pros and Cons of Metaverse

The final judgment on the Pros and Cons of Metaverse's features is still limited since the platform is still in its infancy. The potential of an immersive online environment with elements such as social media, gaming, content production, and other cutting-edge technology is exciting. 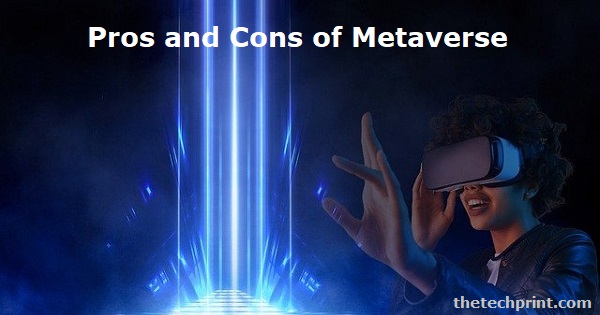 What is the Metaverse?

The Metaverse is a virtual social sphere where users create their avatars, customise them, and perform activities they do in real life.

How large will the Metaverse be?

When it's fully launched, an estimated 1 billion people will access this.

What is the goal of a virtual world?

Metaverse allows you to live the life of your dreams. You create an avatar, customize it and perform activities you do in real life. -By Ceirra McCullough

How can a virtual world be a threat to people?

People shouldn't fear the Metaverse because it will allow them to play games worldwide and from any device that provides access. Also, it will enable you to create your own virtual space and meet people from different parts of the world.

How will the Metaverse be potentially dangerous?

The Metaverse can become a whole new avenue to do harmful things such as cyber-bullying, exploiting children and harassing other people.