Pros and Cons of Shopify 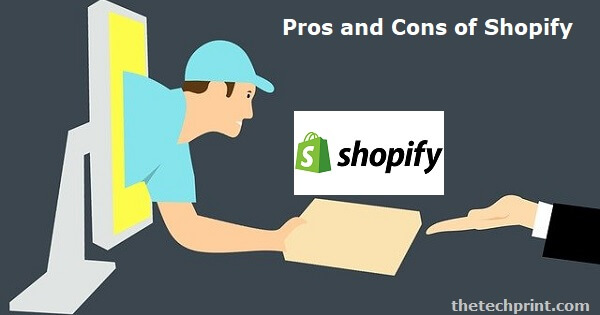 Shopify is one of the most popular e-commerce platforms for small businesses and entrepreneurs. It provides all the tools you need to create an online store, sell products or services, and make money from day 1. But before you take the plunge and start using this platform, it's important to understand a few pros and cons of Shopify first.

Shopify, a company based in Ontario, Canada, is now a dominant name in the e-commerce industry. It's now a globally-known platform people can sell their products and services without having technical knowledge. Through Shopify's eCommerce solutions, you can use different ways of integrating into online marketplaces such as Amazon and eBay. By May 2021, the company said it had more than 1.7 million enterprises in over 175 countries using its platform.

What are the Pros of Shopify?

Shopify is a great choice for entrepreneurs looking to build online stores no matter what kind of products or services they offer. Whether your business needs something simple like hosting basic pages with some shopping cart features or needing a platform with more advanced functionality, Shopify can help. Keep in mind the pros of shopify platform for your business.

For many, the biggest selling point of Shopify is its ease of use. Many feel that using other eCommerce platforms can be complicated, but not so with Shopify. Consistent updates have made it even easier for new users to get started quickly and easily. It's perfect for entrepreneurs who don't want a steep learning curve in setting up their store or updating products on sale, making it an excellent choice no matter your experience level.

Another pro of Shopify is its wide range of available apps. There are currently over 200,000 third-party applications that can help you do everything from tracking your inventory to boosting sales with social media integrations and more. You can use the best features for any product or service you want to sell on your site without having to invest in expensive custom programming or developers who might not know what they're doing anyway.

3. High-quality support is one of the best pros of Shopify store

Folks who have had issues with their eCommerce platforms in the past might be a little wary of using Shopify, but they shouldn't worry. There are always reviews related to a product or service, including Shopify's customer support team, which is highly rated for its level of knowledge and responsiveness when it comes to helping users troubleshoot problems that arise. The company also offers full-service packages if you want more assistance from experts at an additional cost per month.

Shopify offers a wide range of products and prices. You can start with the Shopify Lite plan for just $14/month before upgrading to higher-level plans that offer more features, including unlimited bandwidth, advanced reports, third-party apps, SSL certificates and much more.

The company also works hard to keep its fees competitive while offering value via perks such as free card readers or POS transactions through terminals like Square or PayPal Here at cost, so you don't have to worry about hidden charges if your business starts taking off unexpectedly.

While most Shopify pros focus on the ease of use of their platform, one thing that's often overlooked is how easy it is to set up multiple stores with just a few clicks. You can also customize your site settings, so each store operates independently without any interference between them, which helps you maximize sales and avoid confusion when running more than one business at once.

What are the Cons of Shopify?

Shopify is an excellent platform for small businesses and entrepreneurs to start their own eCommerce stores. However, some drawbacks come with this platform which only tech-savvy people can understand besides additional fees and limited templates. Some common cons of Shopify are as follows.

Like many other eCommerce platforms, Shopify isn't exactly what you'd call "free." While it offers a basic plan for users who are new to the platform with limited features at an affordable price point of just $14/month or less, additional plans offer more functionality.

These cost between $29 and $299 per month depending on your needs, making them one of the pricier options available compared to competitors like BigCommerce and Magento.

One downside to Shopify is the somewhat limited templates you have available when creating your site. While this can be a pro for some who dislike flashy, busy designs- it might not look professional enough if you're trying to build an eCommerce empire and want something more modern and sleek looking like Apple or Nike.

Of course, there are workarounds, but most require additional technical knowledge that could make building your online store even more complicated than using other platforms, which makes them less desirable overall in many cases.

While it doesn't affect everyone, some users have found that geotargeting on Shopify is less effective than other eCommerce platforms. This means shoppers in certain regions might find they can access your site while people in others cannot- even if you're using the same hosting service for both sites.

Fortunately, most developers are aware of this issue. They will usually help you fix it so long as your account is active, making it a relatively minor problem overall but still worth mentioning since not all cons are easy to solve when trying to grow your business online.

If you're looking for a platform that offers hundreds of professional-grade templates to choose from, Shopify might not be the best choice. While this is another pro in many cases since it makes building your site faster and easier- if you want something more advanced or don't have much experience with web design, then it could become an issue down the line when trying to upgrade your store's look.

The good news here is there are plenty of places online where users can request custom work so long as they have enough resources at their disposal, which means people who do have some skills should be able to find what they need within budget so long as they take advantage of these opportunities accordingly.

Shopify is a great choice for many entrepreneurs and small business owners- but it's not necessarily the best option if you're on a tight budget. In comparison, there are tons of ways to save money with this platform, such as using free apps or finding affordable developers online. Most services included in their standard plans come at an additional cost which could quickly add up over time and eat into your profits unless you build them back elsewhere.

Final Say on the Pros and Cons of Shopify

As mentioned at the beginning of this article, there are pros and cons associated with any product or service you use, including Shopify. Unfortunately, cons are typically more noticeable than pros which means many users might overlook the benefits of this platform when searching for alternatives online- even if they were to find something better overall.

As long as your expectations are realistic and you aren't planning on using every single feature available, which isn't necessary for most stores, there's no reason not to give it a try. The current problems with Shopify are seemingly fixable with just a bit of additional effort.

What is the downside of Shopify?

However, you must consider the drawbacks of utilizing Shopify, such as cost for the platform's packages, difficulty in customizing it, restricting content marketing, and needing to use official apps.

Why do people not use Shopify?

The primary disadvantage of Shopify's themes is that only 71 of them are in the official theme Store. This means that if your store uses the same template as another, it will look the same.

Is it worth getting Shopify?

Despite what certain people may claim, running a Shopify store is not as simple as it may appear. However, if you have a good understanding of your market and the intricacies of selling online, then go for it.

Can you get scammed on Shopify?

Thousands of fraudulent merchants offer their goods through Shopify, including numerous bogus Shopify stores. Shopify fraud is something your brand should be aware of if you sell on a Shopify store.