A hybrid solar system works similarly to a traditional one; the only difference is that it uses both technologies used in an on-grid and off-grid solar systems to generate electricity. You can attach batteries to and store power to use the electricity for later uses. This system has gained popularity in recent years as it is considered more efficient and cost-effective than traditional systems. This energy system is far better than its counterpart as you can rely on it even during rainy days or snowfall. However, there are some things that you need to understand first before installing or investing in one. Let's have a look at the pros and cons of hybrid solar system.

What are the Pros of Hybrid Solar System?

There are many advantages of installing or using a hybrid solar system. Some of these advantages are as follows:

1. You can use it even during bad weather conditions

One of the biggest pros of hybrid solar system over a traditional one is the continuous power support. Unlike photovoltaic cells that need sunlight to generate electricity, solar thermal technologies use heat to produce energy. This means you can still generate electricity even on days when there is no sunlight. In fact, it has been estimated that hybrid systems are future ready than traditional ones.

Another benefit of this system is that it is quite cost-effective in the long run. Although the initial investment might be higher, you will eventually save a lot of money as you will not have to spend anything on fuel or other running costs.

Hybrid solar systems continuously, without interruption, as the batteries linked to them store energy. When there is an electricity outage, the batteries operate as an inverter to supply you with backup. This is exactly what happens during the evening or night when there isn't enough sun and energy isn't being produced; batteries provide the backup, and life continues without a hitch.

4. Use of renewable sources in the best way

Because the batteries are linked to the system to store energy, no extra power is lost on sunny days when the sun is out. As a result, these systems take advantage of renewable energy in the most effective way possible by storing energy on a good day and using it on a bad day. The equilibrium is preserved.

5. Load management is among the pros of hybrid solar system

Most hybrid solar power systems, unlike traditional generators, keep the load in check as soon as they are switched on. A hybrid solar system may include technology that adjusts the energy delivery to devices connected to it, whether an air conditioner needs a lot of electricity or a fan requiring less.

What are the Cons of Hybrid Solar System?

There are a few disadvantages of using a hybrid solar system, which are as follows:

One of the biggest cons of hybrid solar system is that it requires more space than traditional systems. This is because you need to install both solar panels and batteries.

2. Not suitable for all locations

This system is not suitable for all locations as it needs a lot of sunlight to work efficiently. If you live in an area with frequent cloudy days, this system might not be the best option.

3. Initial cost is one of the concerning cons of Hybrid Solar System

As mentioned earlier, one of the main disadvantages of this system is that it requires a higher initial investment than traditional systems. This is because you need to buy both solar panels and batteries. However, you will save money in the long run as you will not have to spend anything on fuel or other running costs.

4. Batteries need to be regularly replaced

As mentioned earlier, one of the major problems of this system is that the batteries need to be regularly replaced after some time. This can add to the overall cost and overhead.

The controlling process of this system is quite complicated as it uses two different technologies. This can make it difficult for some people to use this system. Also, the number of devices connected is limited, which can be another disadvantage.

Conclusion on the pros and cons of Hybrid Solar systems

The pros and cons of hybrid solar system really depend on a few factors. How much sun does your area get? If you have plenty of sunshine year-round, a hybrid system is probably a good option. How big is your house, and what are your energy needs? If you use a lot of energy throughout the day (or if you have a large home), going all-in with solar may be the best way to reduce your reliance on the grid. However, even if you don't fall into either of those categories, it never hurts to explore your options and see what's available in your area. 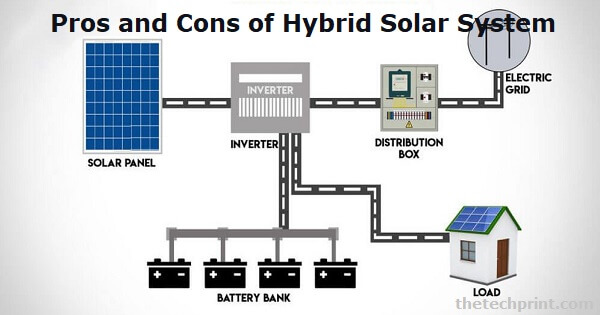 What is hybrid solar system?

A grid-tied hybrid solar system includes battery storage. They include a unique 'smart' inverter that can send direct current (DC) power to and from your batteries and channel alternating current (AC) power between the grid and your home when necessary.

What are the advantages of hybrid off grid systems?

The hybrid system is less pricey to install and maintain than an off-grid system. You don't need to use a backup generator with it. Furthermore, you may decrease the size of your battery. In addition, compared to diesel fuel, grid electricity during off-peak hours is significantly cheaper.

Is a hybrid solar system worth it?

Hybrid systems will save you money on your power bills, thereby justifying the higher upfront system costs. Instead of selling back to your utility, most, if not all, of the excess electricity generated by your system is stored in your solar battery.

What is difference between hybrid and off-grid solar system?

Off-grid solar systems need specialized off-grid inverters and battery packs to store energy for two or more days. On the other hand, hybrid grid-connected systems employ less expensive hybrid (battery) inverters and simply require a battery with a capacity of 5 to 10 hours (overnight).