Tesla is the leader in the electric vehicles sector and has been for some time. Being the major player in the industry, they have developed their cars to be some of the most technologically advanced and efficient on the market. A lot of Tesla's success is due to the high-quality battery they use in their cars. So, if you own one, you should also be eager to figure out the battery replacement costs for Tesla cars.

Although electric cars don't require annual oil changes or radiator coolant refills, their battery packs deteriorate over time. When this happens, whether through an accident or everyday usage, you'll want to change it so you can keep driving your automobile.

What is Expected Tesla Battery Life?

If needing to replace your car battery is your worry, Tesla Model S and X owners can rest easy knowing that these batteries retain 90% capacity even after 200,000 miles. This claim is backed by third-party research data from NimbleFins, which found that at 150,000 miles, the percentage was still at 90%, and for those clocking in at 200k miles on their odometer, over 80% capacity was maintained.

The battery replacement cost for Tesla will vary depending on a few key factors.

There are two main battery types used in Tesla models:

Lithium-ion battery: This is the most common battery used in Tesla models. It is a rechargeable battery with a high energy density and is relatively lightweight.

Nickel metal hydride battery: This battery is less common in Tesla models but offers a longer lifespan than lithium-ion batteries. However, it is also heavier and has a lower energy density.

Although not many stateside Model S owners outside of warranty have had to replace their battery, we did come across a few instances where the replacement visit cost up to $20,000. That price may seem high initially, but when you break it down by individual expenses, you'll see that the Model S battery costs around $12,000-$15,000.

Replacement parts, such as connections and wiring, are occasionally required, with most of them costing around $20-$200. Finally, battery replacement takes anywhere from 3 to 13 hours, depending on whether there is damage to be fixed or a complication in the replacement.

Although labor costs at the Tesla Service center are about $175 to $200 per hour, that's only an extra $525 to $2,600. This might sound excessive until you remember that every personnel member is handling a high-voltage system. In addition, overhead for insurance and facilities compliance is costly.

Although Tesla does not release the specific price for a Model X battery replacement, it is safe to assume that the cost is similar to that of a Model S. Tesla's Model S and X are prone to the same problem, resulting in a $30,000 repair bill.

Reports of Model S repairs for the same issue taking between 3-13 hours indicate that battery replacement labor costs on the Model X could range from $500-$2,500 at a rate of $175-$200 per hour. These figures are highly debatable because the replacement should not be difficult.

If you base the pricing scheme on the current $135 per kWh estimates, a new Tesla battery for a Model X with a 100kWh battery pack should be over $13,500. However, since Tesla uses remanufactured packs almost exclusively, the price should be slightly lower.

If you have to pay the full $30,000 price tag, Tesla's Model S and X battery replacements will set you back more than many people's mortgages. It is essential to remember that battery degradation is a natural process, and all EVs will eventually need to replace their battery packs. The cost of a replacement battery pack will be one of the most significant factors in whether or not an EV makes financial sense for you in the long run.

One service receipt put a Model 3 battery replacement at $13,500 for just the 75 kWh remanufactured battery pack (labor not included). With current estimates of new Model 3 batteries ranging from 50kWh to82 kWh, this cost is still lower than what is seen on our example invoice.

With Tesla increasing production of the Model 3 and constantly seeking to enhance its battery technology, prices are poised to plummet in the following years. For now, our lowest out-of-pocket cost estimate for simple battery replacement on a Model 3 is $13,000 (assuming $12,000 for the battery alone, $100 for the miscellaneous parts, and $500 for labor).

No one can figure out how much the battery replacement cost for Tesla Model Y is, but that might not be such a bad thing. There have been very few reports of people needing new batteries for their Model Ys, and this could be because the car is still so new. As more time goes on and more people start using the Model Y, you'll see more reports of necessary battery replacements.

However, like other models, reports of unusual battery deterioration or necessitating battery replacement on the Model Y are exceedingly rare. Because the Model Y's battery pack is similar to the Tesla Model 3, replacing batteries will most likely be similarly expensive.

The battery replacement cost for Tesla cars is a hot topic for many reasons. Some people are under the impression that replacing the batteries in Teslas is expensive, but that’s not always the case. Keep in mind that while some owners have reported high replacement costs, others have claimed that theirs were much more affordable. The best way to find out how much your specific battery replacement will cost is to contact a Tesla service center directly. 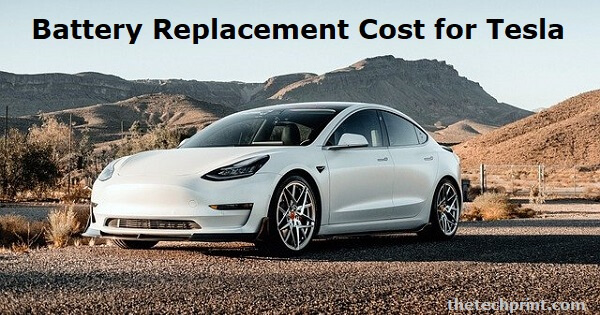 Can you do a Tesla battery replacement at home?

Don't try to repair your Tesla unless you've invested time and money in training and equipment. To diagnose the problems correctly, you'll need to understand how to work with the car's operating system. Also, be cautious that specialty parts, schematics, and plans are difficult to come by. So, don't attempt it unless you're expert in electric vehicle maintenance or willing to jeopardize your Tesla.

How Long Does Tesla Battery Last?

When Should I Replace My Tesla Battery?

If you're noticing a decline in range or performance, it might be time to replace your Tesla battery. But before you do anything, consult with a Tesla service center to get an accurate diagnosis. They'll be able to tell you if it's time to replace your battery or if there's another issue that needs to be addressed.

How Much Does It Cost to Replace a Tesla Battery?

Tesla batteries are not cheap. A replacement battery can cost anywhere from $3,000 to $7,000. However, the cost will vary depending on the model of Tesla you have and the severity of the damage. If you're considering replacing your Tesla battery, be sure to factor in the cost of labor and other associated fees.