Pros and Cons of Redux 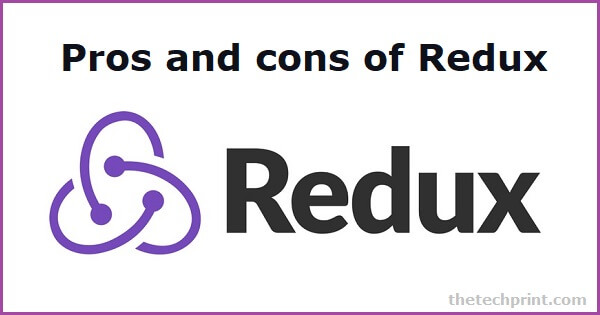 Today, Redux (Open JavaScript Library) is being used by over 2,000 businesses, including Amazon, Instagram, and Robinhood. Redux is a free, open-source state management library widely utilized in JavaScript applications. In layman's terms, it's a pattern for managing and updating application state using actions called 'actions'.

Redux is a data-flow architecture created in 2015 by Andrew Clark and Dan Abramov. Redux is compatible with any front-end frameworks, including React, Vue, and Angular. As a result, Redux has become more popular in the last six years. However, like two sides of a coin, there are arguments regarding pros and cons of Redux; without an understanding of the subject thoroughly enough, you may not be able to reap its benefits to their fullest extent.

Redux is a widely used open-source JavaScript framework for managing application states. It works with React, Vue, and Angular. However, it's most popular among React developers.

Redux is considered to be an upgraded or improved version of Flux. It's because it removed the needless complexity from Flux architecture. If you're looking for high-quality front-end development opportunities, having a thorough knowledge of Redux will come in handy. As a result, developers may make the most of this library by considering the pros and cons of Redux. Let us have a look at what it has to offer.

What are the Pros of Redux?

Multiple pros of Redux have made it a widely used state management solution in today's market. Although the most notable advantage is improved state management, it has much more. Let's take a look at some of them.

1. Increased Predictability of a State

A state is generally predictable in the Redux library. Because reducers are pure functions, they always return the same output when the same action or state is passed to them. Also, in Redux, every state is immutable. As a result, developers may perform time-consuming activities quickly by utilizing infinite redo and undo.

2. Maintainability is one of the main pros of Redux

Redux's strict code organization makes it simple for developers with deep knowledge to comprehend the architecture of any Redux application. As a result, Redux is especially beneficial for large applications that require frequent updates.

When a state changes in Redux, it generates a new state that is often a shallow copy. As a result, re-rendering is less likely. To become a front-end developer, you'll need to know how to make the most of Redux and decrease re-renders.

One of the major pros of Redux is that it improves the performance of large applications. It's also great at keeping track of a component's state even after it's unmounted, which means it'll stay consistent across multiple refreshes. Redux contains several performance enhancements that are implemented on the inside, including component re-renders.

With Redux, debugging an app is straightforward. Developers who have used it say that the DevTools available allow them to traverse the timeline frequently. It's also simpler to comprehend and identify network issues, coding mistakes, and other faults that could cause problems during operation.

What are the Cons of Redux?

Redux has its fair share of drawbacks, which are worth noting. On the one hand, there are a few cons of Redux that developers have identified over time. But on the other hand, the following are the most frequently observed flaws of Redux.

Redux is often criticized for being inflexible. It has few options, and it's relatively rigid. As a result, you may use it to manage simple apps or anything of the sort because state management will become more complicated without Redux.

Every state in Redux is unchangeable. Therefore, a reducer must return a new form each time it is called to change the existing condition. In the long run, this method of building up memory usage generates compilation, resulting in higher memory use.

Redux has a higher learning curve when it comes to layering due to manipulation logic actions or reducers. This is one of the commonly experienced cons of Redux.

Redux can be time-consuming to implement for more minor or medium-level local state management since it necessitates more boilerplate code inputs to get started.

Conclusion on the pros and cons of Redux

The usage of Redux as a state management tool comes with several trade-offs. It adds indirection, complexity, and constraints to code that needs significant expertise in this area and the frameworks it is compatible with. On the other hand, developers who have mastered Redux can tell when to employ it and when not. This way, overcoming Redux's challenges becomes much more straightforward. Also, before utilizing this technology, keep all of these factors in mind for new developers.

Why you should stop using Redux?

Redux keeps all data in a single variable named store. This is problematic because the store will expand as the application grows, making it difficult to access specific values.

Is it worth to use Redux?

You have many application states that are required in numerous locations throughout the app. The application's state is frequently updated. It might be challenging to modify the code that updates that data. Many people may work on the software with a medium or enormous codebase and may be limited by many.

Using Redux also entails learning about it, which may be a waste of time if you don't need it. As a rule of thumb, says one Redux creator, Dan Abramov, you don't need to use Redux unless you're unable to manage state within React or other front-end languages you're working with.

Redux is still popular among developers for assisting them in creating consistent user experiences and managing complicated logic for app state management. However, there have been several discussions regarding the overuse of Redux. It appears that far not all React apps truly require Redux.