Pros and Cons of Hydropower

Water is the largest renewable energy source, but there are various pros and cons of Hydropower. Dams, pumped storage, run-of-the-river, and offshore marine (tidal) are the four types of hydroelectricity production. With a total installed capacity of 331GW, China alone accounted for almost one-third of worldwide hydropower capacity and added 11.74 GW of new capacity in 2016, bringing its cumulative installed capacity to 331GW. The largest hydropower capacity in the world is located in Asia, with China leading the way. It is followed by the United States, Brazil, Canada, India, Japan, and Russia, which accounted for more than 60% of installed capacity at the end of 2016.

What are the Pros of Hydropower?

There are certain pros of hydropower being the cleanest energy source so far. Some of the major ones include:

1. It's Inexpensive in the long run

Hydropower may be one of the most cost-effective forms of renewable energy over time, with low up-front expenditures. There is less maintenance needed for upkeep than other energy sources after the necessary infrastructure is in place, and improvements are being made to improve how well hydropower works.

2. Reliability is one of the main pros of hydropower

Because water is constantly flowing, hydropower is a very reliable energy source. It can be used as a base load power source, providing power around the clock. This is unlike renewable energy sources, such as wind and solar, which are variable and intermittent.

3. It has Low Emissions

Hydropower plants do not produce emissions, making them a much cleaner form of energy than fossil fuels like coal and natural gas. When comparing the life cycle emissions of different energy generation forms, hydropower comes ahead of all other options except for nuclear.

Hydropower can be used in various ways, from large-scale power plants that provide electricity to a whole region to small micro-hydro systems that power a single home.

5. It has a Low Impact on the environment

What are the Cons of Hydropower?

Though there are several advantages of hydropower, there are also some disadvantages to using this form of renewable energy. Some of the cons include:

Hydropower requires a significant upfront investment to build the necessary dams, canals, and other infrastructure. Building a new hydropower plant can range from $1,000 to $4,000 per kilowatt of capacity, making it one of the most expensive forms of energy generation.

2. It Can impact wildlife

Hydropower plants can harm local wildlife, especially if they are poorly planned, adding further to the cons of Hydropower generation. Dams can block the migration routes of fish and other animals, and the changes in water flow can disrupt the natural habitat.

3. It Requires a Good Water Source

To generate electricity, you need a reliable and steady flow of water. Not all places have a good water source for hydropower. This limits the places where hydropower can be used.

4. Floods are among the devastating cons of hydropower

Hydropower plants can cause flooding if they are not well managed. When water is released from the dam, it can flood areas downstream, causing damage to homes and businesses.

5. It Can Impact Local Communities

The construction of a hydropower plant can harm local communities. Displaced people often do not have the skills or resources to find new jobs and may end up living in poverty.

Conclusion on Hydropower Pros and Cons

Hydropower is a renewable resource used for centuries to power homes and businesses. It's an environmentally friendly alternative to other energy forms, but it has some drawbacks. You must decide if the pros outweigh the cons for your specific needs. Hopefully, this guide has given you a good overview of hydropower's benefits and limitations. 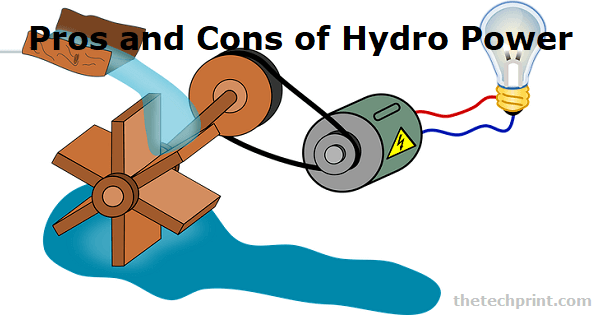 What are the pros of hydropower?

Power generation from hydropower is only one of several advantages it provides. Flood control, irrigation support, and clean drinking water are all hydroelectricity's benefits beyond electricity generation. Hydropower is a cost-effective energy source. In comparison to other sources of energy, hydropower has the advantage of being low-cost and long-lasting over time.

What are the negatives of hydropower?

Hydropower may have environmental and social drawbacks. Reservoirs cause significant modifications to the environment and the rivers they are built on. Dams and reservoirs might reduce river flows, increase water temperature, damage water quality, and produce silt. Fish, birds, and other animals are harmed due to these changes in water levels, temperatures, quality, and flow quantity.

Is hydropower bad for the environment?

The majority of hydroelectric power stations include a dam and a reservoir. Hydropower does not pollute water or air. However, hydropower facilities may have significant environmental consequences by altering the natural environment and affecting land use, housing, and natural habitats in the dam's vicinity.

The water and air are not polluted by hydroelectricity. On the other hand, hydropower plants may have significant environmental impacts by altering the environment and affecting land use, housing, and natural habitats at the dam site.