Today, AI is widely used in many different fields, from medicine to manufacturing. And while there are still some challenges to be overcome, the future of AI looks very promising. Since its inception, artificial intelligence (AI) has profoundly impacted the world. It has revolutionized many different fields, from medicine to manufacturing. AI has made it possible for doctors to diagnose diseases more accurately and for businesses to automate tasks previously done by human workers. What exactly is artificial intelligence, and will it really benefit humanity in the future? There are several pros and cons of Artificial Intelligence that are outlined here.

What are the Pros of Artificial Intelligence?

People make errors from time to time which is one of the tendencies of a human. On the other hand, computers do not make these mistakes if they are built correctly. With Artificial intelligence in place, the choices are made based on previous information and a specific set of algorithms. Consequently, errors are reduced, and the opportunity to achieve high precision accuracy is enhanced.

One of the most significant pros of Artificial Intelligence is that it allows you to traverse many hazardous boundaries set by humans. Engineers can create an AI Robot that can perform dangerous tasks in the industries, allowing you to overcome several hazardous restrictions imposed by people. It may be used effectively in natural and man-made calamities, whether going to Mars, defusing a bomb, exploring the deepest parts of oceans, or mining for coal and oil.

3. 24x7 availability is one of the main pros of Artificial Intelligence

Each day, on average, a human works for four to six hours, excluding breaks. Humans are designed so that they may take time out to rest and prepare for the next day at work. They also have weekly holidays to maintain their work-life and personal lives in balance. However, AI-driven machines can be made to operate 24 hours a day, seven days a week, without rest or becoming bored as opposed to humans.

Some of the most advanced businesses are increasingly using digital assistants to interact with customers, eliminating the requirement for human resources. Many websites employ digital assistants to deliver services that people desire. We may talk about what we're searching for with them. Some chatbots have been developed so that it's difficult to tell whether we're interacting with a bot or a person.

AI can make machines take decisions more quickly than humans, execute activities faster, and carry out tasks at superhuman speeds. While humans consider many things both emotionally and practically when making a decision, an AI-powered machine focuses on what it's been programmed to do. It delivers the results in a shorter period.

What are the Cons of Artificial Intelligence?

Every bright side has a darker version, and so is with AI. There are also many cons of Artificial Intelligence to consider when it comes to human emotions and the way of life.

Every day, AI changes hardware and software to fulfill the most recent needs. It requires a lot of money to maintain and repair machines. The development process is very costly, as these are extremely intricate devices.

At the same time, AI makes people lazy by offering automated solutions to most of their tasks. Humans are prone to become addicted to these technologies, which may have serious consequences for future generations.

3. Unemployment is among the dreaded cons of Artificial Intelligence

AI is gradually taking over repetitive tasks or requiring little thought, such as bookkeeping, customer service, and accounting. Human interference will decrease as AI replaces most routine activities and other work with robots, creating a serious issue in employment standards. Every organization seeks to replace basic qualified people with AI robots that can do comparable work more effectively.

There is no doubt that machines are more efficient when it comes to working, but they can't replicate the human connection that makes teamwork. Machines cannot form a relationship with people, which is an important feature in Team Management. This problem will add further to the cons of artificial intelligence from all aspects of life.

Machines are only capable of executing activities for which they have been designed or programmed. Anything outside that realm is prone to failure or irrelevant output, which may be a major distraction. Unlike humans, they can’t brainstorm or come up with innovative ideas.

Conclusion on the Pros and cons of AI

Artificial Intelligence has several benefits and drawbacks. Both will exist, but humans must manage them and utilize the beneficial aspects of the invention to improve the world. Artificial intelligence has enormous potential advantages. The key for people will be to prevent "the rise of the robots" from spiraling out of control. Some believe that if artificial intelligence is misused, it may destroy human civilization. However, none of the AI technologies developed at that scale can destroy or enslave humanity. 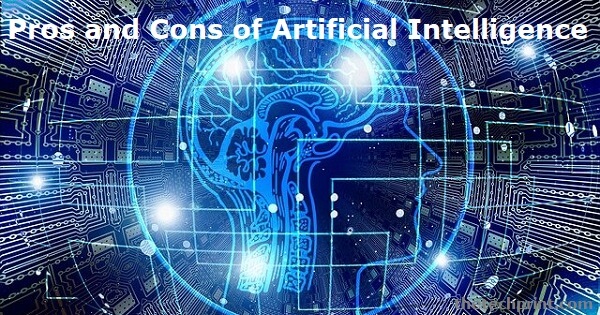 What is pros of artificial intelligence?

Artificial intelligence (AI) is a kind of computer software that automates the process of identifying patterns in data and, as a result, can make faster predictions. These may assist you in marketing judgments by allowing you to see the big picture faster. Artificial intelligence already surpasses human abilities when it comes to finding patterns in words, numbers, or images.

Is artificial intelligence good or bad?

AI has several benefits, such as undertaking too complicated tasks for a person's mind, finishing activities more quickly than people, minimizing mistakes and flaws, and detecting trends and meanings in data. AI has the potential to make life easier, simpler, and better.

Why is AI not good?

The following are some of the more prominent concerns raised by critics of AI: privacy, bias, inequality, safety, and security. CSER's research has identified emerging threats and trends in global cybersecurity and issues at the intersection of AI, digitization, and nuclear weapons systems.

How does AI make humans lazy?

When machines start doing hand labor, people grow less physically active, and a sedentary lifestyle catches on. As their bodies become inactive, human brains must work harder. Modern occupations need more expertise and are more complicated than in the past.

What are AI problems?

The second most significant AI challenge is data gathering and storage. Sensor data is essential for Business AI systems to operate. A mountain of sensor data is collected for the verification of AI validation. Irrelevant and noisy datasets might cause problems because they are difficult to store and analyze.