Pros and Cons of Technology

Technology vouches for what humankind has achieved since the beginning of life on planet earth. All the tremendous innovations have been possible from the stone-age to the silicon age due to Technology. However, many scientists also predict that the same Technology would turn diabolical for the very humankind if not taken care of timely. It's the double-edged sword that forces many minds to consider the pros and cons of Technology seriously.

Technology is the outcome of all the human achievements that have been possible today. Technology is the spine behind human intellect available today that makes it possible to use constructive tools and build faster communication channels. From switching the lights off or on to making coffee every morning, it's everywhere you could possibly imagine. Out of curiosity, you are able to read this information because of technology. Rarely does anyone notice it?

Being the good one, technology portrays its devastating picture. While examining the pros and cons of technology, comparing the benefits against the potential for harm help determine a world where everyone may realize their aspirations.

What are the Pros of technology?

Look where you are and consider millions of things that would not be possible today if wasn't for technology. There is always some good to take out of the recent modern concepts, be it the internet, Computer, or Operating systems. To summarize it in a nutshell, here are some pros of technology worth knowing.

When humans first figured out how to use fire, it saved them from having to spend hours gathering wood. Nowadays, we have gasoline that does the same thing; just pour it into the tank. It's much easier than chopping logs every day or going around collecting twigs.

2. Internet has redefined learning and Business

The use of technology has redefined the education and learning system. You can enrol in any program and start your education from the comfort of your home. Thanks to online learning or the Internet, people can connect faster through fiber and get things done instantly.

You can buy any stuff you need online without having to leave your house, look for jobs, or even find any engaging activity to kill your time.

People are constantly coming up with new ideas for technology; this allows humankind to dream about what can be done in the future for the best interest of nature and living beings. There's nothing like imagining all the possibilities and then seeing them happen.

Just when the world starts to think everything has been invented, there is another one that surprises. For example, users can now call without using Physical SIM Cards with eSIM built-in on their phones.

Whether you're playing a video game, watching TV, or using the internet, being entertained by technology is one of its advantages to everyone. Video games are fun because they take us into different worlds that we can escape from our boring lives (e.g., medieval role-playing games).

Watching television sets up an alternate reality where people do exciting things and get to talk about their behaviour afterwards e.g., popular reality TV shows.

5. Many new opportunities are most acknowledged pros of Technology

Many companies build their businesses on the idea of having technology from FMCG to the agricultural sector. Technology has also helped people start new companies and even create entirely new industries. Now reimagine finding a suitable job, conducting an interview online, and continuing your career from home. This wouldn't be possible a few years back if it weren't a technological thing.

What are the cons of technology?

It’s too much of it that forces people to go off-the-grid. Certain limitations of technology must be considered whether you are a student or a parent. It’s better to acknowledge certain hard truths before humankind becomes solely dependent on machines rather than nature.

Technology is expensive! Think about all the money you spend on software, cell phones, game consoles, computers. The list goes on and on. However, most people don't mind paying for technology because they know how useful it will be in the future.

But sometimes, when people finally get their hands on what they want, it isn't how they thought it would be or what they expected. For example, people buy a luxury car but find that the maintenance costs are high and the gas mileage is low.

2. Over-reliance is one of the cons of technology

Over-reliance on technology is a big problem. People don't know how to get themselves out of sticky situations anymore because they rely too much on new technologies that haven't been invented yet.

Some researchers have said that the theory of evolution can be proven wrong because humans are going downhill by becoming more and more reliant on technology every day. That pretty much justifies the statement, "Smartphones are getting smarter, people are getting dumber."

Is it a parent's responsibility to make sure their child isn't exposed to violent media? Yes! If you let your three-year-old sit in front of the television to watch a show that you deem appropriate, but then they start watching an inappropriate channel, well, it's your fault. You let them do it.

People know this is true and talk about how horrible violence on television is for children, but what about video games? Playing violent video games can cause changes in the brain similar to those caused by drugs or alcohol, e.g., after playing Grand Theft Auto for hours every day for one month, a teenager was arrested for beating up his babysitter.

4. Its effect on young people

When you look around at any high school or college campus, you'll notice that most students are glued to their cell phones, texting friends or surfing the web.

People shouldn't be spending so much time on their computers or phones, but now they are because young people want to be like the older generation, e.g., why do you think Instagram is popular with teenagers? They're trying to look like celebrities.

Global warming has always been a debatable talking point for every nation, being one of the dire consequences of technology. Many scientists believe that global warming is an effect of technology, too much carbon dioxide in the atmosphere results from excessive vehicular movement on roads.

Some scientists say that if we don't work together to fix the problem soon, our civilization won't last much longer. But what can we do? First, everyone has to stop driving gas-powered cars and convert over to electric cars instead, which is a challenge to many developing nations. And second, we have to find sources of clean energy so people can still enjoy the luxuries of technology without hurting the planet.

Final Words on Pros and cons of technology

The cons of technology outweigh the benefits no matter how far humankind grows its intellect. People often just pay for new technologies and expect them to work perfectly, but sometimes it doesn't turn out that way. Technology can cause over-reliance and worsen its effects on nature. However, think of the people who have gone off-grid. They haven’t given up on the technology solely, but they know how to use it in a controlled way to make it sustainable for the future. 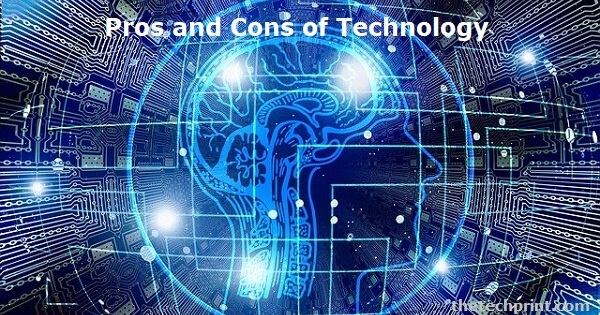 What is the advantages of technology?

Costs savings as a result of computer technology that automates repetitive activities. Because documents are kept on the cloud and can be found quickly, less time is wasted. Companies may act quicker, make faster judgments, and stay flexible due to technology.

Is modern technology good or bad?

On the other hand, the development of technology is both helpful and beneficial for people in a variety of ways. For example, technology may help doctors cure more sick individuals, resulting in saving many lives and the combat of deadly viruses and bacteria. In addition, the world industry's productivity has also increased thanks to technological innovation dramatically.

How technology made our life easier?

Technology makes it possible to automate chores, create reminders, gather receipts, track investments, compare prices, and more. As a result, you won't have to miss out on any important financial activities because of technology. For example, you can instantly pay your bills with a few mouse clicks.

Is technology beneficial or not?

The invention of technology is advantageous to people in several ways. Technology can aid in treating more sick individuals, resulting in the saving of many lives and the commitment against devastating viruses and bacteria. In almost every sector throughout the world, technology has increased production.