Explaining The Pros and Cons of Satellite Internet 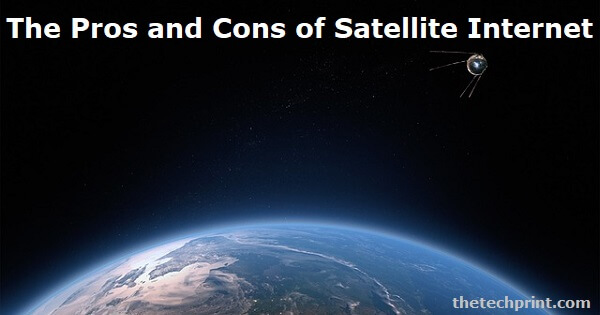 It would be surprising to know that of the 4,852 operational artificial satellites circling Earth on January 1, 2022, 2,944 are registered to the United States. While Starlink is a SpaceX program that has already launched over 1,000 satellites that provide broadband internet to its customers. So, if suddenly your internet or OTT platform is down, blame it on some satellite. Even though speed has improved in recent years, satellite internet is still subject to latency issues due to the distance the signal has to travel. In addition, satellite internet is doubtlessly more expensive than other forms of internet, such as cable or DSL. So, let's examine explaining the pros and cons of Satellite internet and find out if it is the right fit.

What are the Pros of Satellite Internet?

If you live in a place where cable and fiber internet connections are unavailable, Satellite internet is likely to be a godsend. So, there's no doubt that one of the main pros of Satellite Internet is its accessibility. Some others are listed below:

The sky is the limit for satellite internet in ideal conditions. In a clear atmosphere, your device may connect to satellites and obtain access to the internet. This high-speed connection is available virtually everywhere in the United States and internationally. Another advantage of this service is that it doesn't require you to have a physical address for installation, unlike traditional internet services like DSL and cable. Furthermore, it has greater mobility because the satellite signal does not travel via wires or phone lines.

Satellite is a more scalable solution for small businesses or families with many internet users because you can subscribe to higher speeds and more data. With DSL or cable, you would need to get a separate connection for each device. This can be expensive, but with satellite, you can connect multiple devices to the same subscription.

3. High speeds are among the pros of satellite internet

One of the main benefits of satellite internet is that it can offer high rates, even in rural areas. The newest generation of satellites can provide download speeds of up to 25Mbps. However, these speeds are only possible if there are no obstacles between your device and the satellite, such as trees or buildings.

One of the most appealing aspects of satellite internet for many users is that there are no data caps. This means you can use as much data as you want without worrying about exceeding your monthly limit.

What are the Cons of Satellite Internet?

Users should be aware of a few cons of satellite internet before making the switch. Some of these include:

Latency is a critical factor in determining the quality of your internet connection. Using satellite internet, you're likely to experience higher latency than someone using a cable or DSL connection. That's because it takes longer for data to travel from your computer to the satellite and back again.

This can make browsing the web, streaming videos, and playing online games more challenging. Of course, there are ways to reduce latency, but it's something you should be aware of if you're considering satellite internet.

3. If a satellite goes down, your internet goes down too

One of the main cons of satellite internet is that if a satellite goes down, your internet goes down too. This is because the signal has to travel from the satellite to your device, so if the satellite is not working, you will not be able to connect to the internet.

What is the disadvantage of satellite connection?

The primary disadvantage of satellite communication is latency (delay), which causes problems with online gaming and real-time stock market trading. As a result, some satellite service plans include data caps.

What is the main problem with satellite internet service?

The biggest drawback is that it's slow, costly, and suffers from latency issues; providers frequently demand you to sign a contract that seems to go on forever. On the other hand, if you live in a big city, you likely have reliable high-speed internet provided through a wired connection.

Is satellite internet good for streaming?

Even though fiber internet has less bandwidth than satellite Internet and has a lot of latency issues, you may stream with it. On the other hand, streaming will consume your data cap quickly, after which your satellite Internet provider will most likely slow down your connection speeds.

Is satellite internet affected by weather?

Extreme weather might result in poor satellite internet connection quality, as the satellite signals must travel long distances through the air. Unlike radio waves, which are not affected by wind, hardware such as satellite dishes can be shifted, vibrated, bent, or relocated by the wind.

Which is better satellite or fiber Internet?

For satellite internet, upload and download speeds are limited. Fiber internet, on the other hand, is suited for activities that require a lot of bandwidth. With fiber optic internet connection, live streaming and online gaming are unaffected. In addition, a single link can simultaneously support multiple devices.