Pros and Cons of Satellite Internet by Starlink

In 2019, SpaceX's Starlink satellite service launched its first batch of satellites. As Space News mentioned, the company plans to have over 30,000 satellites in orbit to provide internet coverage for every corner of the globe. Right now, Starlink offers much quicker internet than other companies that operate through satellites. Even with this much hype, there are some pros and cons of satellite internet by Starlink before deciding whether or not it is right for them.

Overview of Starlink by SpaceX

SpaceX founder Elon Musk said that the initial public beta testing could begin as early as mid-2020, with general service following in 2021. As of May 2020, over 10,000 people have pre-ordered the service.

In November 2019, SpaceX launched 60 prototype satellites for the Starlink network, dubbed "Mousetrap," as the first step in deploying the planned constellation. The company has since launched two additional batches of 60 satellites each.

More than 3,200 Starlink satellites are currently in orbit as of 2022. According to a tabulation by Jonathan McDowell, an astrophysicist and expert tracker of spaceflight activity, some are providing commercial internet service while others are maneuvering to their operating slots in the constellation.

So instead of getting your internet connection from a physical fiber wire, you are receiving signals from a satellite. This concept is the same for a satellite TV; however, the main difference is that a satellite TV can only receive signals, whereas a satellite internet allows for both uploads and downloads.

The amount of time it takes to finish the process can be assessed in latency or lag, measured in milliseconds (ms). Starlink has a latency in most areas of 20ms, though this is inferior to the single-digit latency offered by fiber internet. Having clarified that point, let's discuss some pros and cons.

What are The Pros of Satellite Internet by Starlink?

Let’s understand the pros of satellite internet by Starlink first.

If you want a fiber internet service, your ISP will need to see if they can actually provide the service in your area. This means they'll check if there's a spot nearby where they can install fiber optic wires to lead directly from their network access point (NAP) box to your home. If everything checks out, then congratulations! You're one step closer to having impressive future-proof internet speeds. Since satellite internet doesn't need cords, it's available in areas that fiber internet can't reach.

2. Quick and Easy to Install

Once your home is deemed eligible for receiving service from a specific ISP, an appointment will be scheduled for them to come out and do the installation. This process can sometimes be quick and easy, but it may require a lot of work in other cases. For example, if they need to install a new line from the street to your house, that will take some time. On the other hand, since satellite internet doesn't need any new lines to be installed, the installation process is typically much quicker and easier.

The Starlink app is available for download on Android and iOS devices, providing users with a simple way to manage their connection. This app provides aid with customizing settings, updating apps, accessing support services, and seeing real-time performance data such as download speed and uptime. You can download it before installation to find the best place for set up-Starlink needs an unobstructed view of the sky to work correctly.

With about 3200 Starlink satellites orbiting the earth, your internet is less affected by weather conditions than other types of internet, such as cable or DSL. That's because the signal doesn't have to travel through the air as it does with those other technologies. This means you're less likely to experience disruptions in your service due to bad weather. And even if there’s a technical glitch, there is always another satellite to piggyback your internet.

What are the Cons of Satellite Internet by Starlink?

There are several cons of Satellite internet by Starlink, but they need to be more severe to prevent this outstanding service from being provided.

For many users, hardware installation could be a problem. A cable or satellite internet provider often provides hardware installation; Starlink does not. As a result, users must either install the dish themselves or hire someone to do it for them, which in some areas may be challenging to find an installer. And that’s one of the common cons of Satellite internet by Starlink.

Starlink also requires an unobstructed view of the sky for optimal internet service. If you live in a building with many floors, like a high-rise or condominium, it may be difficult to find an installation spot for your Starlink dish that meets these requirements.

And depending on where you live, you might have to mount the hardware on top of your house roof, which could present difficulties if asked by the landlord, and hardware is hefty and physically demanding to install.

The Starlink Dish must be permanently mounted at a location with an unobstructed view of the sky. This limits the portability of the service as you cannot take it with you on vacation or to another location. Starlink is not currently designed for mobile use, such as in RVs or boats, although there are rumours that this may change in the future.

If you're considering using satellite internet, keep in mind that one potential issue is obstructions. Obstructions are anything that interrupts the signal coming from the satellite to your terminal. So, if you live in a highly populated or forested area, it may be difficult to find an area with a clear sky overhead for setting up your terminal.

Cable internet is more reliable than other networks as it doesn't require an unobstructed view of the sky. Starlink might be better suited for rural areas in the future as fewer obstacles prevent a clear line of sight.

4. Costs are prominent cons of Satellite Internet by Starlink

Starlink is only currently available in some areas, and there might be other options when it is. Sometimes, it costs more than other internet service providers (ISPs). Starlink must cover the cost of installing and maintaining their satellite infrastructure and providing internet service. So, they can charge a premium in areas where they are the only choice.

The primary downside to Starlink satellite internet in comparison to other cable internet companies is that their number of satellites in a given location fluctuates. This means the bandwidth for all users relying on those satellites also shifts.

Conclusion on the Pros and Cons of Satellite Internet by Starlink

Overall, Starlink is an excellent option for those who live in rural or suburban areas where other internet service providers (ISPs) are not available or are too expensive. The speeds are fast enough for most users, and the data limits are generous. The only real downside is that installation could be difficult for some, and the service is not currently available in all areas. Nevertheless, Starlink will be one of the best internet options in the upcoming years. 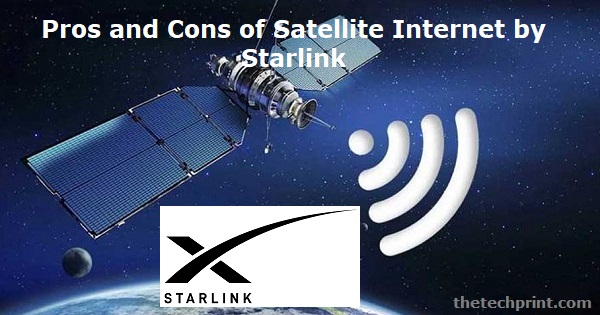 What is the downside of Starlink?

Many satellite internet providers experience weather interference, which is an unavoidable obstacle. While Starlink users report strong signals during heavy rain, there will always be at least a negligible effect on the signal and sometimes even outages.

Is it worth getting Starlink internet?

If you're paying for high-speed broadband internet that's $110 a month or less, plus the equipment cost of $599, Starlink may be a better option for you in terms of both speed and performance.

Is Starlink faster than WIFI?

Both are becoming increasingly popular for their potential as groundbreaking Internet networks, but they differ significantly in construction and function. So which one promises a quicker and more dependable connection? Fiber boasts much higher maximum and median speeds than Starlink or any other satellite company.

Will Starlink work during a storm?

Although it's uncommon, Starlink can still function during a thunderstorm as long as the rain isn't too heavy and your dish can receive the signal from the satellites.