Pros and Cons of Net Neutrality 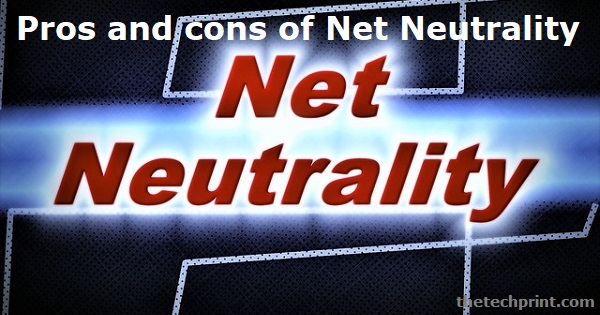 Net neutrality has been a contentious issue recently, with numerous attempts to repeal existing rules. USA, Australia, China, and New Zealand are the nations where Net neutrality isn't enforced yet. However, countries like India, Canada, Brazil, and Switzerland are the ones with net neutrality enforced already. These regulations ensure equal access to the internet, whether you're looking up information about a film to watch or chatting with a friend over Skype. Users have unrestricted access to the open internet thanks to net neutrality. Before jumping to the pros and cons of net neutrality, it's important to understand it.

What is Net neutrality in simple language?

Net neutrality is the principle that your internet service providers (ISPs) should treat all data on the internet equally. This means they shouldn't deliberately slow down or speed up any content based on the type of site or service.

The key to understanding net neutrality is how your ISP provides access to the internet, not what you do once you're online. So, for example, if you're trying to stream a movie from Netflix, your ISP shouldn't be able to make that harder by intentionally slowing down the connection speed.

What are the pros of Net Neutrality?

There's no such thing as a coin with only one side, and nothing more disastrous than speculation over emotion. That's why you need to look at the pros of Net neutrality, including:

One of the main arguments in favor of net neutrality is that it helps to protect freedom of expression. Ensuring that all internet traffic is treated equally means that people can access and share information freely without interference from ISPs.

One of the key pros of net neutrality is that it promotes competition. Without these regulations, ISPs would be able to give preferential treatment to their own services or companies willing to pay more. This could stifle competition and limit consumer choice.

Another argument favoring net neutrality is encouraging innovation. Start-ups and small businesses might not be able to afford to pay for fast lanes, which could limit their ability to compete with larger companies.

4. No Blocking is among potential pros of Net Neutrality

Net neutrality prevents ISPs from blocking access to certain websites or services. This could be for political reasons, such as censorship, or simply because the ISP doesn't like a particular site.

Net neutrality also prevents ISPs from throttling or slowing down, internet traffic for certain services. This could be done to deliberately make a particular service harder to use or simply because the ISP doesn't have enough capacity to deal with all the traffic.

What are the cons of Net Neutrality?

One of the most common cons of net neutrality is that it could lead to slow lanes. This is where ISPs could charge companies for faster speeds, resulting in slower speeds for everyone else. This could be a problem for sites like Netflix that require high-speed connections to work properly.

Another argument against net neutrality is that it could allow ISPs to block or throttle certain types of traffic. This could be done for political reasons, such as censorship, or simply because the ISP doesn't like a particular site.

3. Higher prices are among the common cons of net neutrality

Another potential downside of net neutrality is that it could lead to higher consumer prices. If ISPs are allowed to charge companies for faster speeds, they may also pass on these costs to consumers through higher internet bills.

Some opponents of net neutrality argue that it could lead to less investment in broadband infrastructure. They say that if ISPs are not allowed to charge companies for faster speeds, they will have less incentive to invest in upgrading their networks. This could lead to slower internet for everyone.

Another argument against net neutrality is that it represents government overreach. Proponents of this view argue that the government should not be involved in regulating the internet. They say that the free market will eventually sort out any problems with how ISPs provide service.

What does the future of Net Neutrality look like?

Conclusion on the pros and cons of Net Neutrality

After considering all the pros and cons of Net neutrality, it’s up to you to decide where you stand on this issue. But one thing is for sure – the future of the internet is being debated right now, so your voice needs to be heard. Let your elected officials know how you feel about net neutrality, and ensure they understand that this is an important issue affecting everyone. We can only hope that a decision will be made soon that benefits everyone involved and keeps the internet open and accessible for everyone.

Is neutrality a positive thing?

Internet providers may not prioritize, throttle, or charge more for specific online content under net neutrality. Allowing ISPs to speed or slow particular websites or levy access fees for the fast lane might eventually result in higher internet expenses for customers.

What is the main issue of net neutrality?

The most important problem with net neutrality is that it is highly complex and divisive. There are several competing viewpoints on both sides, and there is no simple answer. The fate of net neutrality remains undecided at the moment, but it will continue to be a contentious subject for years to come.

Fast lane regulations prohibit broadband providers from providing fast lanes to those willing to pay extra. It ensures everyone has an equal opportunity to use the network, but it overlooks instances in which fast lanes may help save lives. It guarantees that everyone receives a fair share of bandwidth, but it fails to address situations when fast lanes can assist save lives.

Net neutrality's one-size-fits-all approach prevents businesses that need more bandwidth for more sophisticated material from paying extra for faster ISP service. That does not affect your privacy directly. However, in the long run, it might have an impact.