Pros and Cons of Internet Regulation

Everyone knows where to head to get information these days. A simple search on the internet will give you pretty much whatever you need to know. The ability to ban specific websites or online material from being viewed is internet censorship. It might be implemented by a government rule, edit, or law. It may also occur if an Internet service provider refuses to allow customers access to content that certain people wish to view. Internet is regulated by government authorities mainly to prevent people from accessing certain illegal content, such as pornography or drugs. However, as with everything, internet regulation has there are some pros and cons of internet regulation. Let's look at some of the significant ones.

What are the Pros of Internet regulation?

Countries like China, the US, South Korea, Germany, France, and others have implemented internet regulation. And that's for good reasons. Let's face it; the internet contains a lot of stuff that you wouldn't want our kids or anyone else to see. So here are some pros of internet regulation to understand.

Many illegal activities take place online, such as cyberbullying, hacking, fraud, and civil unrest. By regulating the internet, governments can help to reduce or even eliminate some of these criminal activities.

As mentioned before, there is a lot of inappropriate content on the internet that can be harmful to children. Parents can have peace of mind knowing that their kids will not be able to access this type of material, which is one of the main pros of internet regulation.

3. Prevents the Spread of misinformation

In today's day and age, it's easy for fake news or rumors to spread like wildfire thanks to social media. This can often lead to mass panic or even riots. However, if the internet is regulated, it would be easier for the government to track down and remove this type of content before it gets out of hand.

4. Maintained National Security is among the prominent pros of internet regulation

In many countries, the government uses internet regulation to maintain national security. By monitoring online activity, they can track down potential threats and stop them before they have a chance to do any harm.

Many countries use internet regulation to control what information is being shared about their businesses and products. This helps to protect trade secrets and intellectual property, which can strengthen economic development.

What are the Cons of Internet Regulation?

1. Infringes on Freedom of Speech

One of the biggest cons of internet regulation is that it violates our right to freedom of speech. After all, if the government can ban certain websites or content, then that means they can also control what we can and cannot see online. This can lead to a form of censorship that many people oppose.

Another problem with internet regulation is that those in power can easily abuse it. For example, a government could use internet regulation to silence its critics or prevent people from accessing information they don't want to see. This abuse of power can lead to severe problems such as a loss of democracy or civil liberties.

Some argue that internet regulation slows down progress because it stifles creativity and innovation. After all, if the government can control what we can see online, then that means they are also able to control what we can create. This can harm economic growth and scientific advancement.

4. Is Difficult to Implement

Another con of internet regulation is that it is difficult to implement effectively. This is because the internet is a global network, which means that it is hard for any one country to control. Additionally, there are many ways to access the internet, which makes it even more difficult to regulate.

5. Cost is one of the dire cons of internet regulation

Finally, another downside of internet regulation is that it can be quite expensive to implement and maintain. This is because you need a lot of staffing and technology to monitor and regulate the internet effectively. This can burden taxpayers and lead to higher taxes or government debt.

Conclusion on the pros and cons of internet regulation

The debate over internet regulation is heating up. On one side, some argue that the government should keep its hands off the internet, while others believe that more stringent regulations are necessary to protect consumers. So, what's the correct answer? That's for you to decide. Weighing the pros and cons of internet regulation is a complex task, but it's essential for ensuring that our online world remains a safe and secure place for everyone. What do you think? 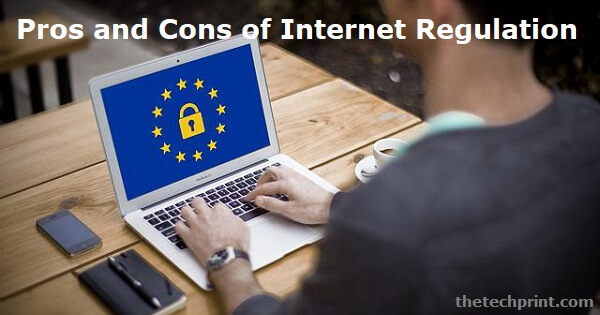 What is Internet regulation and why is it important?

Regulation of the internet is a form of government regulation that limits what information can be posted online or not. Individuals and organizations may also self-censor for moral, religious, or commercial reasons to fit in with societal norms out of fear of legal or other repercussions.

Censorship negatively influences children, who are at risk of being exploited. The internet is censored, and this affects them. Children nowadays are exposed to hate content, adult sites, and incorrect information. Censorship is required for children and adolescents to be safe and for moral values to be restored. Some people use defamation against their foes as a means of retaliation.

Does the government control the internet?

The Federal Communications Commission regulates all electronic communications in the United States. The United States, in keeping with the free speech principle included in the First Amendment, has few content restrictions. However, it does not follow that there are no Internet content rules in the US.

Should the internet be regulated?

Internet regulation and data privacy are essential because they allow for fairness and Internet safety to be integrated into one country's legislation, which also serves to protect your data and prevent you from seeing harmful content.