Pros and cons of Spectrum Mobile

According to Spectrum Mobile, customers may save up to 40% by choosing Spectrum Mobile over other carriers. Like Xfinity Mobile from Comcast, Spectrum Mobile uses Verizon's towers and relies on a network of Wi-Fi hotspots. How well it bodes for customers and how effective it may be on their investments are all the pros and cons of Spectrum Mobile. In this review, you'll be able to know whether or not spectrum mobile network is for you.

The company serves over 25 million people throughout the U.S. Spectrum Mobile is a virtual network operator that uses the Verizon network to provide service. It is currently only offered in 8 states offering the cheapest unlimited data plan on the Verizon network.

However, it limits you to 2G speeds once you exceed your high-speed threshold limit. Spectrum offers an add-on for $10/GB of usage over this limit, returning your speed to LTE levels again.

To buy a phone from Spectrum, you have to use one of their monthly device payment plans, which requires a credit check. The cheapest phone they offer is the LG K20 V at $9 per month for 24 months, totalling about $216.

You have the option of paying more upfront to receive a discount on your monthly payments or waiting until you have paid off your phone entirely to cancel your service without being penalized.

What are the Pros of Spectrum Mobile?

Spectrum is better known as a cable television and internet giant. However, this telecommunications corporation is branching into new territory by providing mobile phone service as Comcast does with the Xfinity Mobile program. Spectrum Mobile will be available only to current Spectrum customers, making it a niche brand. The carrier, however, offers some fantastic benefits, also mentioned here.

Spectrum Mobile has the cheapest unlimited data plan on the Verizon network, and you can initially use up to 5GB before it throttles your speed to 2G. You will also be charged $10 for each gigabyte of high-speed data over this, and their plans are cheaper than other competitors such as Cricket Wireless and AT&T.

2. No contract or credit check required

The company has month-to-month plans with no contract and a 24-month plan that requires a credit check. In order to cancel your service before the end of the 24 months, you have to pay off any remaining device payments that haven't been fulfilled yet. You can also purchase devices without needing a credit check if you bring your phone and use a BYOP SIM card.

3. Use your regular number with WiFi Calling

You don't need a sim card if you are using an unlocked GSM smartphone, as one with TMobile or AT&T bands; I tried using my SIM card in their phone, and it didn't work. However, they offer voice mail services, messaging (SMS & MMS), and visual voicemail. With WiFi Calling turned on, you can still use your regular phone number under Settings>Phone>WiFi Calling.

If you are a spectrum user, there are lots of perks coming your way. For example, Spectrum mobile charges an extra $10 per month on top of your monthly cellular phone plan.

Spectrum also gives users the ability to use mobile hotspot data, which is one of the most appealing features of the business. Spectrum allows you to utilize up to 5 GB of full-speed mobile hotspot data at a time. Your hotspot speeds will be lowered after that, making it difficult to watch old Community episodes or download large files.

What are the Cons of Spectrum mobile?

The Cons of Spectrum mobile is the high cost and low-quality coverage. Spectrum's phone-only service starts at $25 a month, but it doesn't include any data or texting. By comparison, other networks offer unlimited minutes and texting for that price, and Boost Mobile offers an unlimited plan with 1 gigabyte of data for $30 a month. The cons of spectrum mobile are thoroughly reviewed below.

Spectrum Mobile throttles your speed to 2G (around 128Kbps) after you have consumed all of your monthly high-speed data. 1GB of data is around 1024MB, and 1TB is around 1024GB so that the average smartphone user will use up their entire monthly allotment in 2-3 days.

Spectrum Mobile offers an LG K20 V for $9 per month or a Moto E4 Plus for $14 per month when signing up for 24 months under their device payment plan. You can also bring your unlocked GSM phone using a SIM from them, but there are no full-price BYOP options, and you will have to pay off the remaining balance on the device to cancel your service without any fees.

The only way for you to use data in other countries is through WiFi Calling. This means that you will not be able to use the service in Mexico or Canada since this service relies on a US-based signal.

One of the drawbacks of using spectrum mobile service is that there is no international roaming and that it will only work with the provider, and you can only sign up for it with one provider in their area.

5. Competition is one of the cons of Spectrum Mobile

Spectrum Mobile is not the only MVNO that you can choose. As mentioned before, they are part of Verizon's network, so your coverage should be similar to what you would get on Verizon itself. However, there may also be some overlap with other carriers like T-Mobile and AT&T.

Conclusion on Pros and Cons of Spectrum Mobile

Spectrum Mobile is one of the newest MVNOs on the market, but it has a few drawbacks that may make you choose another service. More depends on your usage and how faster you need the data services & calling while roaming. All in all, it's a do-try investment with the competitors in the market offering similar network services. 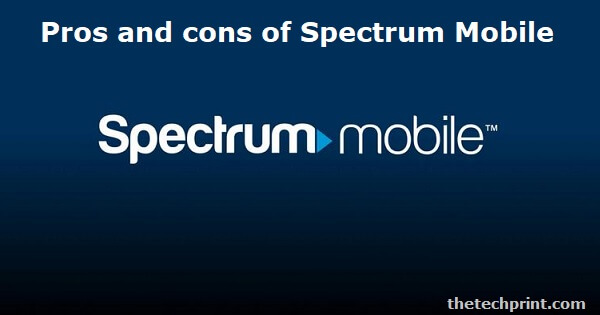 Does Spectrum have good mobile service?

Spectrum Mobile leverages the country's best wireless infrastructure. So in almost every corner of the world, you'll have excellent coverage and fast data rates.

What are the benefits of Spectrum mobile?

1. The Incredible Unlimited Data Plan.
2. By-the-Gig is a Simple Choice.
3. Access to 5G for free

Does Spectrum mobile slow down?

Spectrum will slow your speeds if you use more than 20GB every month, as other carriers do. However, that's somewhat less than the major providers' restrictions since both Verizon and AT&T allow unlimited subscribers to utilize 22 GB of data before slowing down connections.

Spectrum Mobile is a virtual mobile network operator (MVNO) that links with Verizon to give its clients unlimited access to its largest LTE network.

Which is better Verizon or spectrum?

Spectrum is the most expensive option in this category, with Verizon being significantly less costly. Spectrum is often far more expensive than Verizon when comparing plans with comparable advertised speeds than those with relative advertised speeds. This is especially true when considering Spectrum's prohibitive activation cost. In both pricing and symmetrical speeds, Verizon has the advantage.