Pros and Cons of SSD Drives

Solid-state drives (SSDs), first introduced in the 1990s, have been a leading digital storage solution in the 21st century. These drives compete with older, more well-known hard disk drives (HDDs) for market dominance. HDDs and SSDs are designed to store data on laptops, desktops, or other tech gadgets. These drives can store documents, photos, videos, and other digital files. SSDs save data using flash memory, unlike HDDs which use mechanical parts to read or write data to platters. Upon comparison with HDDs, you may find several pros and cons of SSD Drives worth noticing. From performance to longevity, this review details all the deciding factors.

What are the Pros of SSD Drives?

SSDs have surpassed HDDs in popularity. You might think the pros of SSD drives outweigh their drawbacks when considering key points such as read/write speed, lifespan, and durability. These are some of the many benefits of Solid State drives.

Speed is one of the main advantages of solid state drives over hard disk drives. SSDs can perform 25 to 100 times faster than hard disk drives. An HDD takes longer to read and write data because it moves its magnetic head across a spinning platter. This mechanism also breaks down the data arrangement. An SSD is faster than a traditional hard drive because it lacks mechanical parts and fragmentation. This results in shorter boot times and faster file transfers.

An SSD uses less power than an HDD. An HDD is made up of moving parts. It requires the additional ability to perform mechanical work and remain operational. SSDs can do this. Solid-state drives offer energy efficiency, which makes them ideal storage media for mobile devices that require high battery life and capacity.

3. Longer Life is one of the main pros of SSD Drives

Solid-state drives offer another advantage they last longer. Hard disk drives can withstand drops and shakes and are immune to data loss and internal hardware damage. SSDs have no moving parts and are more resistant to falls and shakes. SSDs are also less vulnerable to external damages, such as data loss. An SSD is perfect for tablets, smartphones, and other mobile devices.

Hard drives can produce distracting sounds and vibrations due to their read-write heads moving and the rotation of their metallic disk plates. This is especially true for large data volumes. A solid-state drive is quieter than other drives because it does not have moving parts or mechanical work. This is one of the pros of SSD Drives you can compare to their counterparts.

SSDs also have a small form factor which is another benefit when it comes to portability. An HDD is naturally larger due to the magnet head and metal disk housed in an enclosure. An SSD, on the other hand, has small integrated circuits. An SSD's compact size is ideal for portable laptops and consumer electronics devices like smartphones and tablets.

What are the Cons of SSD Drives?

There’s much to consider before buying a hard drive, which is why understanding the cons of SSD drives is essential. And while there are many benefits of SSDs, there are also some limitations.

The price is one of the main disadvantages or cons of solid-state drives. An SSD costs more per gigabit than an HDD in dollars. An SSD with the same storage capacity as an HDD may be twice as costly. SSDs can be more expensive than other devices, such as computers. This is because solid-state drives are more costly to manufacture.

2. Storage Capacity is one of the major cons of SSD Drives

Manufacturers strive to standardize higher storage capacities, such as 500GB or 1TB. The base storage capacity for solid-state drives is 64GB or 128GB, respectively. This is a significant limitation of SSDs. This is why SSDs are not available in entry-level computers. SSDs can store up to 4TB, but they are rarer or more expensive than HDDs.

Hard disk drives are easy to find because they are readily available at most electronics and computer retailers. Many manufacturers are flooding the market for HDDs. SSDs are more challenging and expensive, particularly those with greater storage capacities. Solid-state drives are difficult to manufacture due to high manufacturing costs. They also have increased retail prices that make them less attractive to retailers. The market is shifting towards mobility, and SSDs are becoming less common than HDDs but more readily available.

One of the main cons of SSD Drives is the limitations on the number of data writes and rewrites that can be done. An SSD cannot store any data in one block, unlike an HDD. Flash memories can only hold a finite amount of data. The 3000 to 5000 read/rewrite cycles for consumer-grade SSDs are equivalent to the 100,000 program-erase cycles for higher-end, more expensive models. Data loss can occur if an SSD's integrity reaches its limit.

Conclusion on the pros and cons of SSD Drives

SSDs are a reliable and trusted storage option used by many laptop and desktop manufacturers. There will be some room between SSDs and HDDs to help you choose the best storage solution. You can't go wrong with either option. HDDs have been reliable storage solutions for many years. The increasing popularity of SSDs, lower pricing, and greater capabilities make them an equally reliable storage option. However, consider the pros and cons of SSD drives before you opt for an SSD. 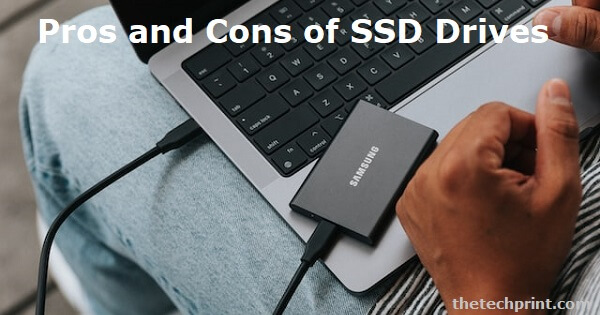 What are the disadvantages of SSDs?

SSDs that are consumer-grade are typically more expensive than hard drives. Data extraction can be complicated and time-consuming due to an SSD's unique file system. It can be costly because the data recovery process can be so complex and takes so much time.

Is it better to have SSD or HDD?

Is it worth having a SSD?

SSDs are faster obviously. You will see an improvement in your computer's performance once you have one installed. Reliability: Mechanical hard drives can be damaged by bumps and drops.

How long will a SSD last?

SSDs are very reliable because they don't contain moving parts. SSDs are highly durable and can last for up to five years. The most durable SSDs can even last for ten years.