Pros and Cons of Google WiFi 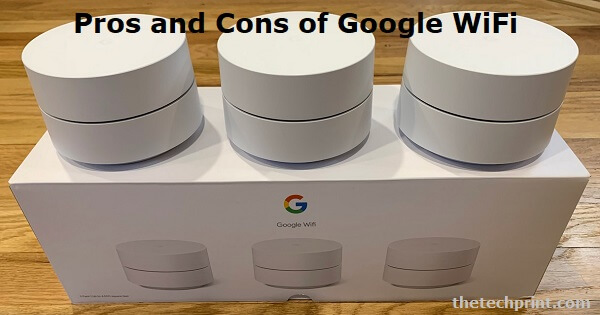 Google wifi is a mesh-capable wireless router designed by Google. It was announced on October 4, 2016, and released in the United States on December 5, 2016. Unlike traditional routers with range extenders, each Google wifi point creates a seamless mesh network that helps eliminate dead zones and buffering. Google wifi points work together as a system, so if one point goes down, the others will automatically pick up the slack. You can also add more points to your network anytime to expand coverage. But with many satisfied users, many others came up with complaints. Thus the argument brings the pros and cons of Google wifi to light.

The Google wifi router (also known as a Point) is a tiny white cylinder with a white matte finish and two narrow canals that divide the body horizontally into two parts to make room for the LED indicator. The Google wifi is available as a single device or as a three-device kit, with all three devices being identical (this is something familiar with all the other wireless mesh systems).

While the Linksys Velop and Netgear Orbi had some rather large but easy-to-install units with a minimalist approach, Google wifi used the same technique Eero and Luma used. It developed smaller units that may be easily placed anywhere in the house.

What are the Pros of Google wifi?

Since the tech giant has a reputation, the device caught users' attention rapidly. The pros of Google wifi which also made it famous as follows.

1. Better Coverage due to Modular Design

The first thing you might have noticed about Google wifi is that it is not a traditional router. Unlike the standard single box routers, it comes in the form of small units which you can place around your house to create a mesh network.

The design's modularity ensures there are no dead zones or weak signals in your home as each unit is connected wirelessly with other units and the main modem. So, if one unit loses connection, the others can take over and provide a stable signal.

2. Easy Setup and Use is one of the known pros of Google WiFi

The next pro is that it is very easy to set up and use this router. The setup process is done through an app (available on iOS and Android). You just need to connect your main modem to the primary unit and then connect other units wirelessly. The app will take care of the rest and will show you how to place the units around your house for better signal strength.

Since this is a Google product, you can be sure that it will receive regular software updates. The company has already promised to provide monthly security updates for the router. So you won't have to worry about any vulnerabilities or exploits.

The pricing comes as one of the notable pros of Google WiFi. Although mesh routers are not cheap, Google wifi comes at a very affordable price. For a single unit, you will have to pay $129, whereas a three-pack costs $299, which is less than what other companies are offering.

What are the Cons of Google wifi?

Just like any other product, there are also some cons of Google wifi that you should know before buying it.

This is one of the biggest cons of the Google WiFi router as it doesn't have any Ethernet ports. So, if you want to connect a wired device (like a TV or game console), you won't be able to do so without using an adapter.

Another problem with this router is not future proof. The mesh units use 802.11ac Wave 2 wireless protocols, which will become outdated soon (December 19, 2022). So, this is not the right choice if you want a router that will last for years.

This router also lacks some features in other routers. For example, there is no built-in VPN or parental controls. So, this is not the right choice if you are looking for a router with advanced features.

4. No Battery Backup is yet one of the considerable cons of Google WiFi

This is another problem with this router, as it doesn't have any battery backup. So, if there is a power outage, the router will go offline until power is restored.

This router also doesn't have any USB ports, which means you won't be able to connect a printer or external storage to it.

Google WiFi is an excellent option if you’re looking for an easy and affordable way to blanket your entire home with wireless internet. However, if you don’t need the extra features or are already happy with your current router setup, there’s no real reason to switch. Ultimately, whether or not to buy Google WiFi comes down to what works best for you and your needs. Given that the router technology needs to be upgraded all the time, consider all the pros and cons of Google WiFi before investing in it.

Is Google wifi worth buying?

One of the most significant selling points of Google wifi is its ease of use. The device is straightforward to set up and manage—even if you're not particularly tech-savvy. Once it's up and running, you can forget about it—unlike traditional routers, which often need to be tweaked and reconfigured regularly.

Does Google wifi make a difference?

Google claims that mesh wifi covers a broader area than a traditional router since it combines several wifi points to build a connected system with a solid signal throughout the home.

Nest wifi and Google wifi are primarily intended for personal use at home rather than for sharing networks across multiple houses. Using Nest wifi or Google wifi in this manner may result in slower wifi speeds and unstable connections.

Is Google wifi being discontinued?

There is no way to change wifi network settings, add new wifi gadgets, or run speed tests. Google Assistant features such as Hey Google, pause my wifi will no longer work.