Pros and Cons of eSIM 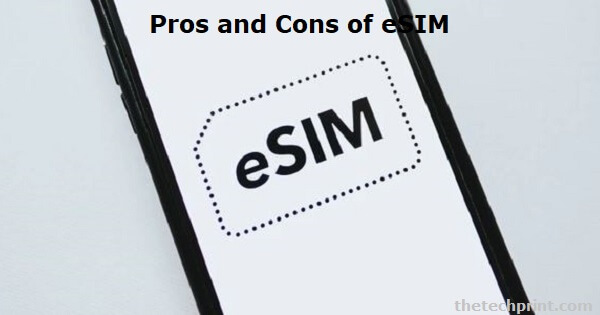 eSIM or embedded sim or universal integrated circuit card (eUICC) is a non-removable and programmable sim card. It can be connected to any mobile operator without the need to swap sim cards for different operators. Since it's a relatively new technology, it is available on newer devices like iPhone XS, Google Pixel 2 and even other devices like Microsoft Surface Pro. How well users will get along with this advanced technology brings many minds to consider different pros and cons of eSIM. Let's dive in to find out further.

The future of mobile and IoT is the subject of heated debate for telecom firms. It may appear to be a sustainable idea to remove plastic SIM cards and replace them with one built right into the motherboard of cellphones.

There are many potential options to explore with this evolving technical development. Rather than manufacturing devices with SIM card slots, adding chips direct to the mobile also seems like an economical idea for manufacturers.

What are the Pros of eSIM?

The eSIM would be embedded in a device, so you would not need to take your phone out to swap out the SIM card. This has many advantages, such as eliminating the need to carry around two devices, a phone and a tablet, or swapping SIM cards when switching from one carrier plan to another. There are other benefits of eSIM, which are becoming talking points for many.

It is an embedded network chip installed beforehand in a device that eliminates swapping sim cards for different operators. However, users can switch to up to 10-15 different operators without porting their current sim card or purchasing a new one.

2. Say Goodbye to the SIM ejector tool and tray

The sim is not inserted externally; the space required for bulky sim holders is saved by using eSIM. Moreover, the space can provide a larger battery in the case of smaller phones and add extra features. Additionally, the lack of an external port for a sim card makes it less vulnerable to dust and moisture.

The technology can be further used for newer technological solutions like MiFi devices, Car emergency services, AI translators, smart earphones etc. All of these technologies can make use of embedded network chips, which can be used to make phone calls in case of emergency and provide additional services.

4. Easily integrated with other Smart Devices

Many new devices like smartwatches are already reaping the benefits of eSIM or eUICC technology and making smart devices more efficient. Since 2010 GSM technology has been looking onto software-based sim technology to eliminate external plastic made chips.

5. Global Use is one of the noteworthy pros of eSIM technology

ESIM also facilitates the use of all devices globally and getting connected to different operators in areas of low service. It benefits the user as the network issues faced in different locations can be solved by finding the best available network. Also, travelling can get better with no sim swap situations.

What are the Cons of eSIM?

The disadvantages of esim technology are that it only allows the phone to be used with one carrier because eSIM is not compatible with any other carrier. Another problem is that although many carriers offer esim technology to make it easier for their customers, some still require a physical sim card to work. Below are some mention-worthy cons of eSIM, which every user should be aware of.

While replacing the old devices, the traditional sim system is quite efficient and fast. The user can remove the sim and replace it with a new device. However, it can be a little problematic in the embedded sim as the eSIM needs to be closed before using it in a new phone.

Another problem that arises with the cloud-based eSIM is the possibility of hacking during a lost phone scenario. If someone needs to make some changes in the user profile, a configuration request must be requested from the user end. But it can also be done if someone gets a hand over your devices with wrong intentions.

3. Cons of eSIM for Users with Old Devices

The technology is limited to new devices, and currently, few network operators allow the use of their network through eSIM. However, it can change as the technology becomes more dominant over the currently used one. The old devices are not capable of switching over to other networks.

In case of lost and broken phones, it becomes a feature creating problems for the user. Both the cases are quite common for a smartphone user and can happen quite often. The data stored in SIM memory such as contacts, messages, or other stored information cannot be retrieved from a broken phone.

The current alteration to different networks is limited to a lesser number, and an eSIM can change to a limited number of network operators. This creates limitations for a single device, and people requiring excessive travel can face problems with their devices getting limited functionality. Also, The eSIM has a shorter lifespan than a regular SIM card since it can be replaced at any time with a newer version of the software.

Conclusion on Pros and Cons of eSIM

While it can have some disadvantages, the implementation of this technology is still in the development phase and can see some better changes in it later on. The current use is limited to few phones, but the wide use can be seen in devices like tablets, cars, smartwatches etc.

It can be modified to provide more innovative ideas where you can make a call from anywhere using any available network from any available device. This is the main idea behind the invention of this chipless technology. However, consider the pros and cons of eSIM technology closely. For the best example, mobile batteries are built-in the cellphones; once it expires, you have no option except for buying a new phone.

What is the disadvantage of eSIM?

When you buy a new device, like Apple's iPhone XS or Samsung Galaxy Note 9, there is an additional step in the process of obtaining your eSIM profile from the cloud. As a result, it takes longer than it would update into a new phone when you upgrade.

Is an eSIM better than physical SIM?

The eSIM is superior to a physical SIM card since it offers far more advantages: eSIM is small: This allows manufacturers to rearrange the internal structure of their devices and provide extra space for other components or a larger battery.

Should you use eSIM?

eSIMs are a feature that some smartphones and mobile carriers are already offering. eSIM mobiles make it simple to have two phone numbers on one device. This is useful if you want to maintain separate personal and business phones or travel overseas. In addition, eSIMs phones allow you to connect to a local network more quickly, avoiding the high cost of international roaming and offering you the best value for your money. With this said, if you're interested in having two phone numbers on one device, consider an eSIM enabled smartphone.

It's true that in many cases, an eSIM will not consume a battery. The difference is rather subtle because it doesn't use power as a physical SIM does. However, you use more energy than if you were connected to only one because you are connected to two networks. Your phone consumes electricity whether you are using it or not.