Pros and Cons of Nanotechnology 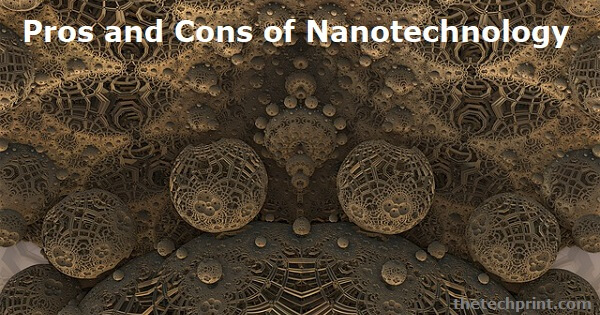 Nanotechnology has become one of the exciting innovations in today's world. From working out at the cellular level in the healthcare sector to leaping into defense mechanisms and research, it's almost everywhere. However, technology is also not too far from the debate. There's always a question about how humans and other living beings will be affected due to its advancements. Thus you can evaluate the pros and cons of nanotechnology based on several factors. Some of them are mentioned below.

What are the Pros of Nanotechnology?

To enumerate the advantages and disadvantages of nanotechnology, let us first run through the good things this technology brings:

1. Pros of Nanotechnology in the healthcare industry

Nanotechnology is already having a significant impact on medicine. Researchers use nanoparticles to target cancerous tumors, develop drug delivery systems, and improve medical imaging. Some nanoparticle-based therapies are multi-purpose; they can detect tumors and deliver medications for therapy.

Nanotechnology can be used to create materials with increased strength and durability. Nanomaterials are already being used in sporting goods, eyeglasses, and other products where a higher degree of durability is desired. This technology can also help to create buildings and infrastructure that are more resistant to earthquakes, high winds, and other natural disasters.

One of the potential pros of nanotechnology is that it could increase energy efficiency in various applications. Nanomaterials can create better insulation for buildings, leading to reduced heating and cooling costs. In addition, nanotechnology can be used to create more efficient solar cells and other renewable energy technologies.

Examples of Nanotechnology in everyday life

Nanotechnology is already being used in several products and applications. Some examples include:

1. Stainless steel contains nano-sized particles of carbon that give it extra strength and resistance to corrosion.

2. Titanium dioxide nanoparticles are used as a UV filter in many sunscreen lotions.

3. Certain types of cloth are coated with nanoparticles that make them water and stain-resistant.

4. Many electronic devices, such as computers, TVs, and cell phones, contain nanomaterials.

5. Nanosensors are being developed to detect very small amounts of toxic chemicals or pollutants in the environment.

6. Researchers are also developing nano-sized robots that could be used for medical purposes, such as delivering drugs directly to cancer cells or repairing damaged tissues.

What are the Cons of Nanotechnology?

Of course, every coin has two sides. Along with the advantages, there are certain cons of nanotechnology as well:

One of the main cons of nanotechnology is that its long-term health effects are unknown. As nanoparticles can be inhaled, ingested, or absorbed through the skin, there is a potential for them to cause damage to cells or DNA. In addition, it is not yet known whether or not nanoparticles will accumulate in the body over time and what effect this could have on human health.

5. Cost is among several cons of Nanotechnology

However, advancements in nanotechnology, while beneficial in medicine, engineering, and material science fields, are pricey because the technology requires a lot of money to function, and the raw materials involved are also expensive. As a result, the overall purchase of technology for an average person becomes costly.

Nanotechnology is a fascinating field with a lot of potential. However, some questions still need to be answered before they can be widely adopted. As researchers learn more about the effects of nanotechnology on humans and the environment, society will be able to decide better if this technology is right for them.

What are the positive impacts of nanotechnology?

What are the disadvantages of nanoparticles?

Nanoparticles can cross the blood-brain barrier, making them ideal for delivering medicines straight to the brain. This is an advantage since nanoparticles that deliver medications may damage the brain.

Is nanotechnology good or bad Why?

However, tiny particles of a certain size are not necessarily beneficial. Nanoparticles might be harmful to human health in some circumstances. To the point that even small particles that are deemed safe for humans would almost certainly prove hazardous when reduced to nanoparticle dimensions.

Why is nanotechnology bad for the environment?

Toxicological studies have revealed that nanoparticles harm unicellular aquatic organisms and aquatic animals, such as fish and Daphnia. Protists are limited by carbon nanotubes, which cause harmful effects on rainbow trout's respiratory systems.