Pros and Cons of 5GHZ WiFi

If you are using or have just signed up for a new wireless router, you may have seen the term "5GHz" thrown around quite a bit. This is one of the major WiFi frequencies that are used today. Here are some things you should know about 5GHz WiFi before making your decision on whether to use it or not. 5GHZ is one of the newest and most popular WiFi frequencies. It is also the fastest WiFi frequency currently available.

What are the Pros of 5GHZ WiFi?

Let's dive into why this technology is helpful through the pros of 5GHZ WiFi.

One of the benefits of 5GHz is that there are more non-overlapping channels than 2.4GHz. This means that if you live in an apartment complex or have a lot of neighbors, they are much less likely to be on the same channel as you and cause interference.

In addition, because 5GHz signals don't travel as far as 2.4GHz signals, your neighbors are also less likely to be able to connect to your network unless they live very close by.

People mainly want to use 5GHz because it offers more speed. If you have a newer router that supports both 2.4GHz and 5GHz, you will likely see two separate networks when you connect to WiFi. The 5GHz network will usually have fewer devices connected to it and therefore be able to offer faster speeds.

Spectrum flexibility is the name of the game with 802.11ac, which uses a 5GHz spectrum and has considerably wider bandwidth than previous WiFi protocols using 2.4GHz. According to Cisco, 802.11ac is capable of "product configurations operating at up to 3.47 Gbps".

3. Less Congestion is among the major pros of 5GHZ WiFi

The 5GHz band is much less congested than the 2.4GHz band because most devices still use 2.4GHz.WiFi deployments utilizing 5GHz frequency bands are uncommon compared to 2.4GHz WiFi networks—there simply aren't as many devices operating on 5GHz as there are on 2.4 GHz.

As a result, the noise floor is significantly lower—there aren't as many devices making noise that interfere with your communications.

The 5GHz band also offers four times as many 10MHz-wide channels as the 2.4GHz band (45 vs. 11). In practice, it's easier to find a less congested channel in the 5GHz band than in the 2.4GHz band, which can lead to improved performance.

This is because there are only three non-overlapping channels in the 2.4GHz band, so they will interfere if two APs are on the same channel.

In contrast, there are twenty non-overlapping channels in the 5GHz band, so it's much less likely that two APs will be on the same channel. As a result, 5GHz WiFi networks are less likely to experience interference from other devices.

What are the Cons of 5GHZ WiFi?

Now that you've looked at some of the pros, let's consider some potential cons of 5GHZ WiFi.

The biggest downside of 5GHz WiFi is that it has a limited range. This is because 5GHz signals are more easily absorbed by walls and other objects than 2.4GHz signals. As a result, 5GHz signals don't travel as far as 2.4GHz signals. You may need multiple 5GHz access points to get coverage throughout the entire building if you have a large home or office.

2. More Expensive Equipment is among many cons of 5Ghz WiFi

3. Not compatible with all devices

Another potential downside of 5GHz WiFi is that it's not compatible with all devices. In particular, older devices may not support 5GHz frequencies. This means that you won't be able to take advantage of the benefits of 5GHz WiFi if you have an older device that doesn't support it.

5GHz signals are also more susceptible to interference from objects than 2.4GHz signals which is among the considerable cons of 5Ghz WiFi. This means that 5GHz signals are more likely to be blocked by walls and other obstacles. As a result, 5GHz WiFi requires a clear line of sight between the device and the access point to work properly.

It depends on your needs and what you’re looking for in a connection. If you have devices that need to be connected simultaneously with no interference and fast speeds are a must, then 5GHz may be right up your alley. However, if the range is more important to you than speed or you have a lot of devices connecting to your network, then 2.4GHz may still be the better option for you. Ultimately, it’s up to you to decide which frequency will work best for your home and devices. 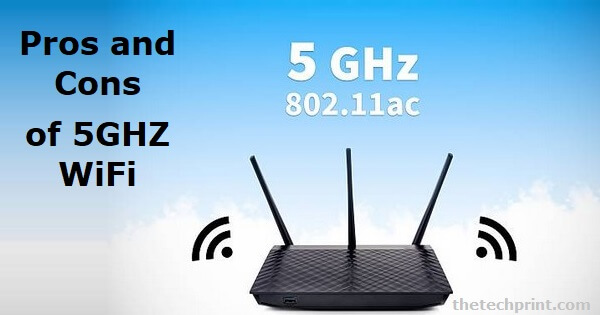 What is a disadvantage of the 5 GHz band?

The 5 GHz Radiofrequency signal has a lower wavelength which makes it difficult for it to pass through walls, floors, and solid obstructions. Common WiFi devices don’t use this network as it requires 5 GHz specific WiFi APs or routers.

Is it worth using 5GHz WiFi?

This is the best option for higher speeds if you can connect most of your gadgets to the router with a 5 GHz connection. Similarly, if you're engaged in many high-bandwidth activities online, such as gaming or video conferencing, using this frequency and positioning yourself as near as possible to the router is recommended.

2.4 GHz signals are far more susceptible to multipath fading and blockages when they travel through solid objects such as walls. This might limit access points' coverage for buildings like houses and offices, where many walls may separate a wireless antenna from the user.

Does turning off 5 GHz improve WiFi?

The AC-wifi standard allows the greatest speed on the 5GHz network. The 2.4GHz network has the longest reach. If you'd instead not use 5 GHz, switching it off will reduce WiFi radiation even more from your router.