Pros and Cons of 5G Network for Business and Users

The fifth generation of cellular network technology is LTE-5G, and it works on the same radio frequencies as our smartphones do. However, this ground-breaking technology has improved network connections and given new possibilities for more creative solutions. Many are asking about the Pros and Cons of 5G networks, as any previous innovation does. An honest answer to this is projected as more positive than negative impacts. However, it’s your right to be informed about both.

5G is fueling rapid progress and enhancing user experiences in the professional sector. 5G cellular wireless standards will be the new generation of cellular data. It is a move from 4G to 5th generation wireless technology that would propel businesses especially, through digital platforms.

The 5th Generation Cell Service, abbreviated to 5G cell service, is a major new mobile broadband network now that carriers have shifted to. It's the next generation of mobile wireless service that will eventually replace the 4G LTE service.

The new 5G technology offers greater capacity, which is necessary due to the growing demand for high-quality Internet services. The time is now to take a deeper look at the pros of 5G network technology and what it has for users.

The 5G network has the potential to make your smartphone download data over a hundred times faster and upload it ten times faster than 4G. This means everything from sending high-quality photos and videos, to streaming your favorite music, all at ultrafast speeds. This accelerated network speed will eventually save you precious time.

With more spectrum in the higher frequency bands, there is plenty of room for users to access cellular networks with their smartphones while still leaving lots of room available for things like smart city technology.

Latency is the time it takes to send or receive bits of data across a network, measured in milliseconds (ms). With 5G, you can expect average latency between 1 and 10 ms, resulting in fast load times and real-time responsiveness.

4. Cost-effectiveness is one of many pros of 5G networks

The introduction of the IoT (IoT) is creating an exponential surge in data usage, which can be expected to grow by 50% each year until 2020. This increase in data usage has caused concerns for carriers about the strain on their networks, and the costs are starting to become unmanageable.

5G will help reduce this burden because it requires a lower base station density than 4G/LTE, resulting in 20 times less cost per bit, according to Nokia estimates. That’s why many major cellular infrastructure players are building 5G networks, including Intel, Ericsson, and Qualcomm.

Massive Multiple-Input Multiple-Output (MIMO) will play a big role in 5G networks. It's a technology that expands the number of antennas on base stations from dozens to hundreds, dramatically increasing network capacity. Massive MIMO will increase total data throughput by multiplying it with the number of antennas used in transmission. It's a big step towards making the network efficient and robust, thus, one of the major pros of the 5G network.

A big advantage of 5G is its ease of use when it comes to network management. Because there are so many devices connected at once, things can quickly get complicated if not managed properly.

Managing traffic flows becomes especially tricky during major events like concerts, sporting events, or even natural disasters–that’s why 5G has been designed for smarter connectivity and efficient bandwidth usage.

What are the Projected Cons of the 5G Network?

Some of the cons of 5G that have been seen so far are that it has been a threat to people with epilepsy and other people who have neurological issues. In addition, there is the risk of increased electromagnetic radiation being emitted from cellular antennas, which can negatively impact cells and organisms in the environment. The following are some major cons of the 5G network as experts predict.

5G network technology will be introduced in select cities around the globe, beginning with major areas like the US, China, and South Korea. There are still plenty of steps to be taken before 5G is made available everywhere. Many developing nations still rely on outdated technology, which is more of a challenge for them to shift to 5G entirely, as they need huge investments to upgrade.

Some smartphone models that lack 5G compatibility may experience connectivity issues when upgrading to LTE-A networks (4G). So you’ll need to wait for your smartphone to catch up if you want access to all the benefits of 5G technology. Although 5G networks are not yet widespread, it can be expected that any new smartphones released recently have support for this technology.

3. Data Caps on Your Mobile Plan

One important thing to consider is how much data you use on your phone. More data usage equals higher monthly data charges. Since 5G can potentially offer faster speeds, you may end up using more data than before–so keep an eye on what you use to avoid unexpected costs.

4. Security & Privacy are considerable cons of the 5G network

5g security is another concern, as the network would enable governments and telecom providers to gather vast amounts of private information about citizens. Anyone with access to the technology could theoretically track your location, behavior, and communications at any time without you knowing. Although there are strict regulations for 5G networks, one never knows how these rules will change once big companies start developing this technology further.

5. Interference with other devices

Spectrum frequencies are limited, which means there are restrictions on how much traffic each frequency can carry. More devices operating on the same frequencies simultaneously have a higher risk of interference between devices using similar or adjacent bands.

It's critical to have a decent grasp of the 5G network's pros and cons if you want to make well-informed business decisions. By 2035, it is expected that 5G will generate $12 trillion in global income and revolutionize how organizations and individuals work. However, while there's plenty to be excited about, such as faster speeds and more possibilities to transform digitally, businesses must decide whether or not, now is the right time to invest in 5G. 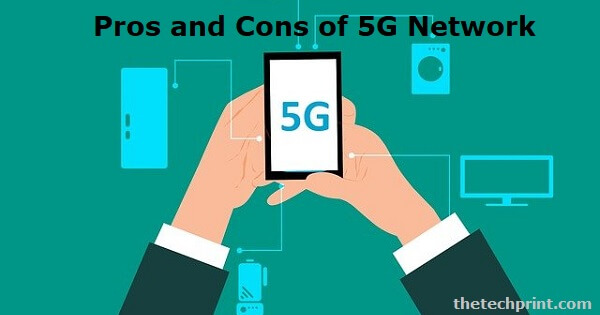 What are the negatives of 5G?

Exposures to BPA have been linked to a variety of diseases, including cancer, cellular stress, an increase in free radicals that can cause disease, DNA damage and other genetic alterations, reproductive system structural and functional changes, learning and memory deficits, neurological disorders, and negative effects on general well-being in humans.

Does 5G harm the environment?

The installation of 5G might have a devastating effect on ecosystems. According to a study from Punjab University, cell tower radiation caused deformed eggs in sparrows exposed to it for five to 30 minutes. In addition, microwave radiation from a cell tower disrupted the nesting, breeding, and roosting of birds in Spain.

What are pros of 5G?