Pros and Cons of Internet of Things

The Internet of things, or the IoT, is a system of interconnected devices and sensors that can collect and share data. The IoT has the potential to revolutionize the way we live, work, and play by providing us with real-time information about the world around us. However, as with any new technology, there are pros and cons to consider before diving in.

Everything may now be controlled wirelessly. Whether it's a children's toy or a driverless truck, the IoT has combined the physical and digital worlds. As a result, IoT is the backbone of the global economy. In 2022, revenue in the IoT market is expected to reach $951.50 million. Smart Home Technologies is the largest category, with a projected market volume of US$932.30 billion by 2022. The market's growth rate (CAGR 2022-2027) is expected to be 9.71%, resulting in a market volume of $1,512.00 billion by 2027.

What are the Pros of Internet of Things?

The devices connected to the Internet can be easily accessed from anywhere in the world. All you need is a stable internet connection, and you will be able to control your devices from any corner of the globe.

2. Increased Efficiency is one of the notable pros of the Internet of Things

IoT has made our lives easier and has increased the efficiency of various tasks. For instance, you can now control the temperature of your room from your smartphone while you are on your way back home. This saves you the hassle of manually adjusting the temperature when you reach home.

One of the major benefits of IoT is that it has increased the safety and security of homes and offices. With the help of IoT, people can now monitor their premises from anywhere in the world. This helps you to keep an eye on your belongings even when you are not at home.

IoT provides greater convenience as people can now control all the devices in the home or office from a single device. You no longer need to carry a bunch of remote controls everywhere you go.

IoT has also improved communication among different devices. With the help of IoT, various devices can now share data and information. This helps make better decisions as all the relevant information is available in one place.

IoT has also helped in reducing the costs of various tasks. For instance, with the help of IoT, you can now track your vehicles and save on fuel costs. Similarly, you can also reduce the costs of maintaining your homes by using smart devices that help save energy.

What are the Cons of Internet of Things?

The following are some of the most important cons of Internet of Things:

One of the biggest concerns of IoT is security. As more and more devices are connected to the Internet, the chances of data theft and hacking are also increasing.

That's a sure and dire problem with Internet of things, and that's user privacy. With the help of IoT, companies can now track your movements and collect a lot of data about you. This raises serious concerns about your right to privacy.

3. Dependence is one of the main cons of Internet of things

IoT is also creating a dependence on technology. As users become more reliant on smart devices, they are losing their ability to do things independently. This can lead to severe problems if the technology fails or gets hacked.

One of the biggest cons of Internet of Things is that it can be quite expensive to implement. The cost of installing and maintaining the infrastructure needed for IoT can be quite high.

IoT is also quite complex to understand, especially for those who are not tech-savvy. As the number of devices connected to the internet increases, the system's complexity also increases. This can make it difficult for people to understand and use.

The Internet of things is growing by leaps and bounds. But with that growth comes new challenges for companies and consumers alike. So before you decide if the Internet of things is right for your business, take a look at both the pros and cons of this burgeoning technology. Weighing the risks and rewards will help you make an informed decision about whether or not to jump on the IoT bandwagon. 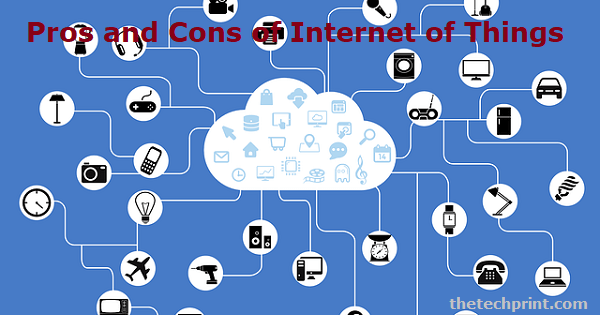 What is Internet of Things with example?

The Internet of Things is a term that refers to the rapidly expanding network of connected devices that can collect and transmit data in real-time via built-in sensors. For example, the IoT may be used to connect thermostats, automobiles, lights, refrigerators, and other appliances.

What is IoT and its advantages?

The Internet of Things (IoT) encompasses a wide range of devices, from thermostats and factory equipment to printers, TVs, and refrigerators.

How IoT is useful in our daily life?

IoT enables human-to-human, machine-to-machine, and human-to-machine interactions that will define how our cars function. Sensors have been added to IoT-connected cars allowing them to gather information from their environment.

Is a laptop an IoT device?

IoT, as the name implies, is about linking previously unconnected devices. It involves extending internet connectivity to any type of traditionally dumb or non-internet-enabled physical devices and everyday objects. These gadgets can communicate and interact over the Internet thanks to the technology installed inside them.

Can IoT work without Internet?

Not all IoT devices require access to the Internet. However, they need connectivity to other network devices to automate certain activities, allowing you to communicate with them using direct commands or changing their settings.