Pros and Cons of Internet Surveillance

Citizens across the globe were outraged when they learned about the NSA's Prism program. Many felt that their privacy had been violated and their trust had been betrayed. Some even went so far as to call for a boycott of American products and services.

The vast majority of people simply wanted more information about the program and how it worked. They also wanted to know what, if anything, could be done to stop it.

In the wake of the Prism scandal, many governments began to take a closer look at their own surveillance programs. Several countries announced plans to tighten regulations on electronic intelligence gathering. And in the United States, Congress held hearings on the matter and called for greater oversight of the NSA.

What are the Pros of Internet Surveillance?

Every program has its reasons to be launched and that’s what the NSA intended to launch Prism. Some of the pros of internet surveillance are quite clear; National security, data research, and better quality of life. Here are some other factors to consider.

1. Helps to monitor and prevent crime

By keeping track of people's online activities, law enforcement agencies can thwart potential criminal activity before it happens. This is especially useful in cases of terrorism or child predators.

2. Helps to track down missing persons

By monitoring people's recent online activity, authorities can often find missing persons or hostages who have been taken against their will.

3. Research is one of the pros of internet surveillance

It's possible that the data collected for security could be utilized in the future to comprehend other aspects of society better. In the long run, it is conceivable that some portions of these databases might become available to social scientists who may make significant contributions to their fields.

By monitoring people's online activity, authorities can gain valuable intelligence about potential threats to national security. This is can be one of the prominent pros of internet surveillance as the government can track all the suspicious moves from offenders and criminals even before they act.

In terms of financial damage, the United States was the most severely affected country in 2018: industry experts predict that government costs due to cyberattacks exceed 13.7 billion dollars in the United States. Thus, it’s most important to keep track of every little suspicious thing and eliminate the risks even before it turns dangerous.

What are the cons of internet surveillance?

Let’s take a look at the cons of internet surveillance and find out what’s people’s response to being monitored.

Well, online privacy is a must-have topic everywhere with so much of users’ information being circulated through websites already. One of the most prominent cons of internet surveillance is that it violates people's right to privacy. In many cases, internet users are unaware that they are being monitored.

Another concern is that internet surveillance can be abused for political purposes. For example, a government could use surveillance data to crack down on dissenters or opponents.

3. Higher costs are among the major cons of Internet surveillance

Building an algorithm certainly takes time, intelligence, and plenty of resources. Internet surveillance does require a lot of manpower and high-end technology. This can burden taxpayers, especially in countries with large populations.

People are less likely to trust a government constantly monitoring their online activity. This can lead to a feeling of paranoia and anxiety, as well as a general reduction in the level of openness and transparency.

5. Can lead to false positives

In some cases, internet surveillance can lead to false positives, where innocent people are mistakenly identified as criminals or threats. This can have a devastating impact on the lives of those affected.

The pros and cons of internet surveillance are still being debated by governments and privacy advocates worldwide. While some argue that internet surveillance is necessary to protect national security, others believe it violates innocent citizens' privacy. No matter which side of the debate you're on, it's essential to understand the good, the bad, and ugly before taking a stance. 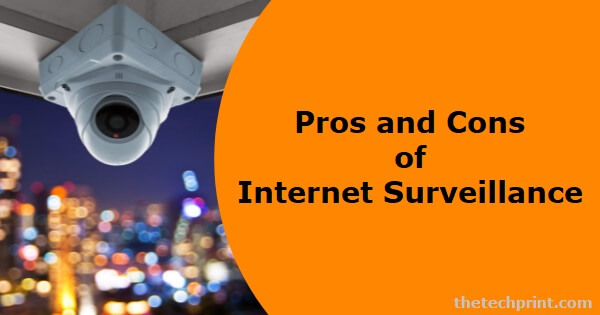 What is Internet surveillance?

Surveillance, in general, is the monitoring of online activity, behaviors, or other changing information and most often involves individuals. It refers to the surveillance of people or groups by government organizations.

Why is surveillance not effective always?

Surveillance technology is now widespread in our society, generating a fierce debate between supporters and opponents. Government surveillance, in particular, has come under increasing public attention, with defenders claiming that it enhances safety and critics alleging that it violates privacy rights.

Why is internet surveillance important?

Surveillance can be used to prevent and manage public health crises, such as H7N9 outbreaks.

What can I do about internet surveillance?

To avoid being tracked online, you must be careful not to share sensitive information online frequently. Use privacy software such as VPNs, encrypted chat apps, private browsing browser add-ons, and end-to-end email encryption to secure yourself against prying eyes.