In recent years streaming platforms have transformed the viewership across the globe. Traditional television is no longer the only source of entertainment, as the concept of cord-cutting has taken over. As a result, consumers are increasingly turning to Over-the-Top (OTT) platforms for their entertainment needs. Several OTT platforms are available in the market, each with its own offerings. So, which OTT platform is free? To answer this question, you must first understand what an OTT platform is and what it offers.

An OTT platform is a media service delivered over the internet without needing a traditional cable or satellite TV subscription. It offers users a variety of content, such as TV shows, movies, live sports, and more.

What are the best free Streaming Services?

The best free OTT platforms are not intended to compete with Netflix and Disney Plus. They don't have the most recent TV series, blockbuster movies, or high-quality original content. And that's just fine since they're all available for free.

All of the best free streaming services are available and have decent number shows, and movies to bring you entertainment on-the-go. They have the same number of advertisements as a cable network, which is usually 30 to 60 seconds long.

Live channels are available on some free streaming services; others provide on-demand programming. Some offer both. Peacock Free, our top pick, includes 13,000 hours of material from the NBC Universal portfolio of brands.

For live channels, Pluto TV and Sling Free are the most popular options (as is the new live guide on Roku Channel, which is still in beta).

Use Crackle to watch on-demand movies, TV shows, and originals. Amazon Freevee and Tubi are excellent on-demand services with a wide range of films and series. Vudu's library is growing as it has Walmart's muscle behind it.

Let's Jump on to the best Free OTT Services:

Peacock is a streaming service from NBCUniversal that offers more than 13,000 hours of content. It has a mix of live and on-demand programming, including news, sports, movies, TV shows, and originals. There are three tiers of service: Peacock Free, Peacock Premium ($4.99/month), and Peacock Premium Plus ($9.99/month).

Pluto TV, owned by Viacom, offers a decent selection of on-demand movies and programs, but it excels particularly in live TV streaming. Viewers can search for live channels in a grid, much like they would with cable television. The lineup is heavily influenced by Viacom's other properties, allowing you to tune into Fox Sports or CNN (though those run curated videos rather than the live broadcast you'd get if you watched them on cable). This surely is one of the Top Free Streaming Services available in the USA.

Sling TV is a live streaming service that offers more than 50 channels. It has a mix of news, sports, entertainment, and movies. Sling TV is available on various devices, including Roku, Amazon Fire TV, Android TV, Apple TV, Chromecast, and more. Sling TV is a great live TV streaming service, with $30 per month for 50+ channels. In addition, they've just introduced a free zone with live and on-demand programming. Unfortunately, there aren't many free live channels, and aside from ABC News, the majority of them aren't well-known names.

The Roku Channel app is already pre-installed on any Roku TV or device, but it's also available for download on mobile phones and tablets. You can also visit the website to access it. The Roku Channel does not force you to create an account (you may watch as a guest), but signing up allows you to stream content from another device. It's a similar service to Netflix, with the same on-demand movies and shows. The best thing about the Roku Channel is that it frequently offers the first installments of expensive cable series, such as Game of Thrones, Billions, Outlander, and Watchmen.

IMDb TV, previously known as Amazon Freevee, is an offshoot of the internet movie database that has long been a great resource for filmographies. Amazon recently revamped the service available on Fire TVs and Fire TV Sticks by default. You may use the Amazon Prime Video app to access IMDb TV if you have a different device.

If you are wondering Which OTT Platform is Free and offers much more services like Netflix? Tubi is the right answer. Tubi, like Netflix, offers an on-demand library of over 20,000 movies and TV shows for free. Of course, Tubi does not have the newest blockbuster films or original programming available. However, because they collaborated with over 250 content providers, including Hollywood heavyweights Paramount, Lionsgate, and MGM, they were able to establish it. The Terminator, Foxcatcher, Kill Bill, The Craft, and Fruitvale Station are just a few recent titles.

It's been around since 2004 — when Netflix was still delivering DVDs. Chicken Soup for the Soul Entertainment owns Crackle, which features free movies and TV shows and original programming that sets it apart from other free streaming services on this list. Although there is no need to create a Crackle account, you may add your favorites and save progress while watching a film if you have one. In addition, it offers originals with top actors, including Martin Freeman, Bryan Cranston, and Rupert Grint, among others.

Vudu is a digital marketplace that lets you buy new movies and TV shows and stream free content. To use Vudu, you'll need to create an account (or log in using your Walmart account). You can view over 10,000 free films and TV episodes after signing up for an account (or using your Walmart account). None are major blockbusters, but free streaming services have a superior variety. Recent movies available in the Movies section include Trojan, The Prestige, All Is Lost, Hoosiers, and Four Weddings and a Funeral, which are better than TV.

One of the top free OTT platforms is Xumo, which offers live and on-demand programming. The software is available for download on Roku, iOS, and Android, as well as on many major smart TV manufacturers. There is no need to register. More than 190 channels are available through Xumo, including NBC News, Fox Sports, Funny or Die, and TMZ. The on-demand section lists all of the channels, organized by genre. Unfortunately, it's difficult to tell what television shows are accessible using Xumo's website design.

So, which OTT platform is free? While several subscription-based streaming services are available, several top-quality options offer content at no cost. Hopefully, this list of the best free streaming services can get you binge on without paying any dollar. 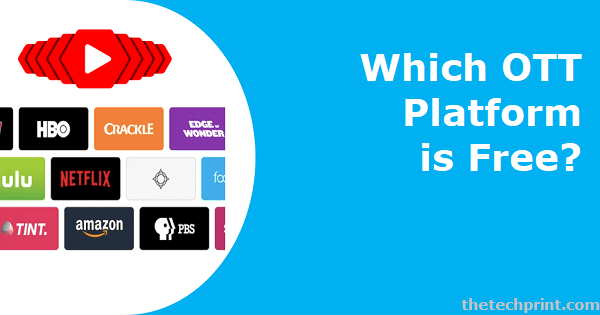 Some streaming platforms offering free content are Peacock, Roku, IMDB TV, Vudu, Tubi, Crackle, and Pluto TV. You can find more information about each platform on their websites.

What is the lowest cost streaming TV service?

The most cost-effective live TV services for cord-cutting are Pluto TV and Xumo, both free. Paid alternatives include Philo, Paramount+, and Sling (especially the basic Blue or Orange packages), which are quite cheap.

What is free instead of Netflix?

Can I watch TV on the Internet for free?

PlutoTV and Sony Crackle, among other sites, host free libraries of select TV shows. Just expect to see commercials. On the network side, you may access current and popular series on NBC or Fox by watching free episodes on the network's website or app.