Pros and Cons of TikTok

TikTok, as a short video app, took the world by storm while landing into controversies later on. It was launched in 2017 as an Android and iOS app which rapidly grew as a favourite among teenagers. The short video app is appreciated for many reasons, from providing earning sources to many to bringing talented artists to the world’s attention. But, in recent years, the app was condemned for different reasons. So, before you use this platform for whatever purpose, it’s important to go through the Pros and Cons of TikTok Videos App.

It's a great tool to create your short videos, be it DIY, Art & craft, or funny jokes. You have many reasons to try this app as it's easy to use and doesn't require you to have professional-level skills. But, it's all the positives to consider as this Chinese built app had flaws such as privacy issues and access to inappropriate content.

You can enjoy watching TikTok videos all day long as it’s a hub for artists, creators, and entertainers. Some of the prominent pros of TikTok video app are worth tending to.

1. TikTok is a free video app

The app is free to download and register for use. Once create your account, you can start uploading your videos and share your stuff with the audience. There is no need to pay for additional apps or equipment, as you can easily run it on your smartphone.

2. Easy to get started

TikTok allows you to create and share videos with the world easily for which you don't have to be tech-savvy. There is no need for additional equipment or special software, just an internet connection and a camera on your phone or tablet. If this sounds good, then TikTok may be right for you to start.

One of the many pros of TikTok app is that it's easy for people to get started. The app has a user-friendly interface and doesn't require you to post up very many personal details or follow too many other accounts before you can start using the platform. People who are intimidated by social media will also appreciate how quickly users can become comfortable on TikTok.

TikTok is also good for users looking to build up their social media presence and be known as influencers. The platform has an algorithm that showcases popular videos, so if you post something, great people may see your content and decide to follow or subscribe.

In addition, TikTok does not have many competitors in the video app market, which means it's easy to stand out if you have a following or high activity levels. Once you get noticed by sponsors, you can earn in handsome figures through your Tiktok videos.

5. Networking is one of the mentionable pros of Tiktok App

On the plus side, the TikTok app allows people to network through the comments sections of shared videos. This is great if you want to connect with other users, make friends or collaborate on projects since it's easy to talk about video content and find like-minded TikTokers via hashtags. This not only increases your fan following but also your income.

6. Lots of filters and visual effects

TikTok has many fun features like Filters, stickers, emojis and other visuals that make the platform interesting. So if you want to try something creative with your videos or take them to another level, TikTok is a good app. The best part is, anyone can use it no matter what profession they are into. It’s a great tool to try your creativity to its best using the built-in tools.

Some Considerable Cons of Tiktok you need to know

While the advantages of this app might be many, it also has its fair share of disadvantages. Therefore, this is not for everyone and should definitely be used carefully. If you are thinking about getting started, check out some cons of TikTok Videos app for further consideration.

TikTok also lacks a reporting feature, which means there's no way for users to see how many views their videos have received. This can be problematic if you want to measure your content's impact on people and use this data as part of your marketing efforts.

TikTok doesn't allow users to edit their videos, which means all content must be shot in-app. If you're looking for more flexibility with how your video is filmed, then TikTok may not provide what you need.

3. Tiktok is banned in some nations

TikTok has been banned in countries such as the US, UK, India, Pakistan, and many others due to security reasons. This is problematic if your brand or business wants to reach people worldwide since it may be restricted from doing so by TikTok's limitations. Currently, the tiktok app is available in 157 countries. If Tiktok videos are inaccessible from your country, you may need a VPN app to use it.

Tiktok does not allow users to post links from other videos on the platform, which may be a problem if you want to cross-promote your work or increase exposure for existing content. Provided this video app is standalone, you can’t take your videos to wider audience through global platforms such as YouTube.

The app had been under the scanners many times for hosting uncensored and inappropriate data. According to Parent Zone, the app creator company, ByteDance, was fined a record $5.7million by the US Federal Trade Commission for flouting US law by collecting data on children under 13 without their parents' permission.

Many parents also have a complaint that TikTok is an easily accessible place for inappropriate content. With no moderators, the videos that are posted often contain nudity, violence and drug use. Tiktok has disadvantages for kids because there is not much moderation or accountability to what gets put up on the app's platform. This makes it easy for users who want to post inappropriate content to post it and get away with it.

6. TikTok has turned into an absolute freakshow

Some people showcase their skills in arts & crafts, how-to tricks, and DIY hacks. But, then, there are people who do literally anything to gain attention and collect views, even if they have to be as idiotic as possible. Such people are best explained by YouTuber Joey B Toonz and Khaby Lame.

People blocking traffic and performing publicity stunts for nothing creative but to waste time have flooded platforms such as Instagram and YouTube. Yet, surprisingly, they are everywhere to find.

Final Comments on Pros and Cons of Tiktok

In conclusion, the pros and cons of Tik Tok video app are many; it's a fun way to connect with friends with similar interests. On the other hand, people can be too sensitive about other peoples' posts, resulting in bullying comments from those who disagree with them. It could also lead to oversharing personal information without thinking about how others would react if they were put into their shoes. All in all, if you have something sensible to do and share with others, TikTok is your go-to place; if you don't, there are other productive ways to get noticed or even make money. 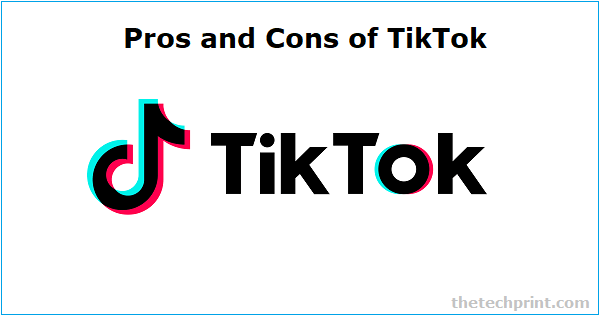 What are the cons of TikTok?

TikTok Promotes Negative Comparison. This can be said about most social media sites, but it appears to be particularly noticeable with TikTok. It illustrates an unhealthy relationship with food, and it's also a source of bullying.

Is TikTok positive or negative?

While the program may be utilized for good, it can also be used as a tool for bullying. Many individuals leave negative remarks on the films and target creators who maximize their anonymity. In addition, some users utilize the app to bash other people's videos, while others create videos to deride others.

How is TikTok harmful?

TikTok has acquired a notorious reputation for hosting harmful viral missions on its platform, which have at their worst resulted in major injury or death - as was the case with the blackout challenge that prompted Italian officials to act against the social network this year to remove underage users.

Is there a dark side of TikTok?

TikTok has a reputation for being one of the last bright spots on the internet, and it embraces that moniker with a slogan: the last sunny corner on the internet. But beneath the surface, TikTok is also home to anorexia videos, bullying content, suicide messages, and child sexual abuse material.

In response, TikTok has announced that it will change its policies. The company will now automatically set accounts for people under the age of 18 to private and tighten other controls for all users under the age of 18 when interacting with other users and TikTok content itself. Now, too, other youngsters using the app who are over 13 will be unable to access 18+ content.