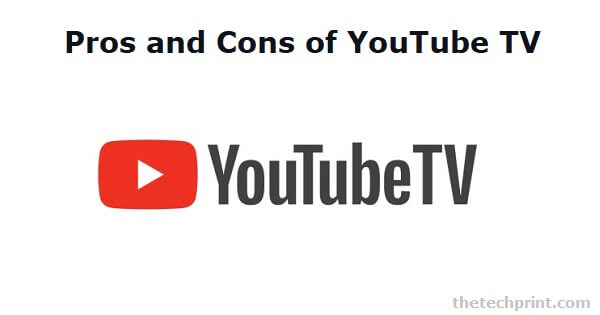 Unsurprisingly, the world's largest video hosting and sharing platform has surpassed 100 million viewers daily, says Google. In addition, people spend hours watching YouTube and YouTube TV every month. According to stats, YouTube makes up to 41% of ad-supported video streaming watch time. YouTube subscriptions start at a base price of $64.99, delivering you 118 channels. It also offers you a free trial for 14 days. It's the best platform for watching Families, sports fans, and DVR. But, its competitors have a lot more to attract customers. These factors bring many to consider the pros and cons of YouTube TV.

With access to live TV, on-demand movies, full seasons of popular TV shows, limitless DVR space, YouTube videos, and the most recent news clips, YouTube TV combines the greatest features of all that streaming offers. Here are some of the pros of YouTube TV worth considering.

1. No cable is required

YouTube TV is an online streaming service that does not require a cable or satellite television package. This can save you a lot of money, as the average American household spends $107 per month on cable TV.

Not all live television streaming services are as generous as Sling TV. Hulu + Live TV, for example, gives you just 50 hours of storage space. However, for $9.99 per month, you can purchase the Enhanced Cloud DVR add-on and extend your storage capacity to 200 hours.

Unlike other streaming services, which usually allow only one or two accounts per household, YouTube TV allows up to six accounts. This means each member of your family can have their own account with their own DVR recordings.

4. Friendly User-Interface is one of the pros of YouTube TV

The layout of YouTube TV is simple. If you've ever used Netflix, Hulu, or Amazon Prime Video, the user interface and viewing experience will be quite similar. The main three tabs are Library, Home, and Live. The Library tab holds all of your previously recorded shows. Home offers various sections such as "Top

Picks for You" and "On Now." Finally, the Live tab has a channel guide in the center with presently playing episodes to the right.There's a search bar at the top of each page, so you should have no trouble finding something to watch, whether on-demand films or TV shows. On recorded programs, you can skip commercials but not during live broadcasts.

There aren't many cons of YouTube TV. Google has done everything to provide the finest platform possible for its customers.

One of the biggest drawbacks of YouTube TV is that it only offers about 110 channels so far. This is far less than the 250+ channels some cable and satellite providers offer. Also, there are no history or tennis channels available, and these problems add further to the cons of YouTube TV.

Apart from tennis, their sports programming also has certain flaws and limits. For example, licensing restrictions from their partners and sports leagues limit viewership in some sports competitions. These limitations are determined by factors such as your location.

3. It's More expensive than some competitors

At $64.99 per month, YouTube TV is one of the most expensive streaming services available. Some competitors, such as Sling TV and AT&T TV Now, offer more channels for less money.

Another drawback of YouTube TV is that it does not include the ability to watch content offline. Even their cloud-based DVR service, which allows you to watch your programs while on the go or without using mobile data, isn't suitable for everyone.

Conclusion on the Pros and cons of YouTube TV

Even though the service's price has risen over time, it still provides one of the best live TV streaming experiences at a lower price than most cable bills.The cloud-based DVR is a real standout for individuals who want to view regular television programs but don't have the time to be in front of the TV at a specific moment. And the fact that you can categorize personalized DVR storage locations for family members makes it simple to separate adult entertainment from children's media. Take advantage of the free trial if you're considering signing up for YouTube TV. You'll have a chance to test the service before spending money. Then, if you're not convinced, make sure to cancel your trial before it ends so your credit card isn't charged.

The main drawbacks are the service's cost and that it doesn't cover as wide a region as other options. In addition, you'll still have to deal with the disadvantages of cable television, such as commercials during live TV and network streaming resolution restrictions.

YouTube TV is a good option if you want to cut the cable. With live TV, on-demand movies, full seasons of popular TV shows, unlimited DVR storage space, YouTube videos, and the latest news videos, YouTubeTV combines all that streaming television offers with everything that traditional television offers.

Hulu with Live TV, This service combines Hulu with a full television streaming service and is called, as the name implies, it mixes Hulu with a complete television package. It offers 65+ channels and a 50-hour DVR for $69.99 per month. The main drawback is that it may only be watched on two devices simultaneously rather than three for YouTube TV.

After weeks of drama, YouTube TV and Disney have agreed to a new agreement, with the latter's channels, such as ESPN, being restored. In addition, the virtual MVPD assured customers that they would receive a $15 one-time credit instead.

According to the official blog, the cost of YouTube TV is increasing because new channels are being added. Users have requested that specific content be included in the bundle as it currently exists on YouTube TV. So that's what you've seen there.