Pros and Cons of PS4 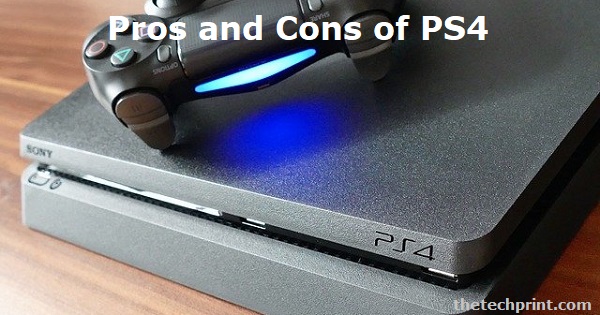 As of July 2022, Sony has been able to sell out over 116 million units of PlayStation 4. The dip in number of sales was probably due to the launch of PS5 which certainly is revamped version of its predecessor. Gamers can stream HD media on the PS4, have nonstop entertainment, play games online, and connect with millions of gamers from all over the world. The PS4 has several games, goods, and multimedia possibilities available. Despite having many amazing features, PlayStation 4 has its side of the bad story. There are some pros and cons of PS4 you need to know before buying.

What are the Pros of PS4?

From controller to game libraries, the UI is one of the many pros of PS4 to discuss. Let’s look at some to determine whether these fit your requirement or not.

The PlayStation 4 has a big GPU that greatly improves the console's performance when combined with its CPU. Games running at 1080p may be launched on the PS4. The DualShock 4 controller has a touch screen and a share button. This makes it simpler to control the controller while playing in-game live streaming to friends. The PlayStation 4 is Sony's most elegant game machine to date. The controller has a sophisticated upgrade, offering the best changes to a gamepad in years.

It has an excellent variety of video games which is one of the pros of PS4 as an upgrade to the previous ones. You can find almost any genre you're looking for, from horror to first-person shooters to puzzle games and more. Thanks to its backward compatibility feature, the console also supports several older PlayStation 3 titles.

The Sony PlayStation 4 is one of the most powerful gaming machines on the market. It has an 8-core CPU, a 1.84 TFLOPS GPU, and 8 GB of GDDR5 RAM. This makes for some incredible graphics and gameplay. The PS4 also supports 4K video output and HDR content.

The PS4 is more than just a gaming console. It's also a great multimedia device. You can use it to stream movies, TV shows, music, and photos. The console also has a built-in Blu-ray player so that you can watch your favorite movies in.

5. User-friendly interface is also among the pros of PS4

What are The Cons of PS4?

Let's look at some of the cons of PS4 so you can decide whether it's the right console for you.

The PlayStation 4 does not support PS3 game discs or any other PlayStation console. The read-only Blu-ray drive, which also supports DVDs, is incompatible with the PS3. In addition, because the PS4 and older gaming consoles are designed differently, it cannot connect to them. The PlayStation 4 does not support PC streaming, media servers, or third-party services like PlayOn. You won't be able to stream audio or video files from your home server to the PS4.

2. Limited Storage is among the considerable cons of PS4

The PS4 comes with a 500 GB hard drive. However, after factoring in the operating system and pre-installed games, the available storage space is reduced to 409 GB. In addition, the average PlayStation 4 game size is around 40 GB. You can only store 10 to 12 games on the console anytime.

3. No 4K Upscaling for Games

The PlayStation 4 is capable of outputting video at 4K resolution. However, this feature is only available for movies and videos—not games. Therefore, when playing a game on the PS4, the console will only display at 1080p.

4. Not Supported by All TVs

The PlayStation 4 uses a proprietary HDMI cable to connect to your TV. Unfortunately, this means that not all TVs are compatible with the console. You'll need to purchase an adapter if you don't have a compatible TV. This incompatibility is among certain cons of the PS4 console.

On the PS4, you can only capture up to 15 minutes of gameplay per hour. You may only record the most recent fifteen minutes of a game you're presently playing. There are no other social media sites or networks through which you may share your gaming footage, which is very limiting. You won't be able to copy your gameplay video from yours.

Unfortunately, your PS4 does not support audio CDs, MP3s, or SACDs. To listen to music on your PS4, you must subscribe to Sony's Unlimited Cloud-Based Music Service.

Conclusion on the pros and cons of PS4

All things considered, the PS4 is a great console with great potential. The graphics are amazing, and it has some really cool features. That said, there are a few drawbacks. For example, some people have had trouble connecting to the internet, and others have complained about the noise the console makes. So, before you run out and buy one, make sure you weigh all the pros and cons.

Is PS4 worth buying?

Gamers have mocked the PlayStation 4's paltry selection of games in the past, but now that it has ended, there are many fantastic options. Here are just a few of the PlayStation-exclusive titles available on PS4.

Why should I get a PlayStation?

The most important reason to acquire a PlayStation 5 is (obviously) the games. The video games you can't play anywhere else are particularly interesting. Of course, it depends on which titles you enjoy, but I believe that Sony has always had the finest exclusives.