Statista predicts that the number of people watching selected OTT services in the United States will rise by 2024. As of 2019, Netflix had the most viewers in the United States, with 154.4 million subscribers. By 2024, according to the source, there will be over 182 million subscribers. Amazon is the second-largest subscription video-on-demand service. So, you can get an idea of how Over-the-top platform companies are growing. If you are just curious or want to subscribe to one, here are the Top OTT platforms in USA you should know about.

Top OTT Platforms in the USA to Consider

Even though there has been some movement in the rankings, YouTube has remained at the top of the OTT video services list, with over 2 billion users worldwide. Despite competition from Facebook, Instagram, and TikTok, it will continue to dominate streaming in future years. In 2022, 95.8% of US OTT video subscribers will watch YouTube at least once a month, compared to Netflix's 73.8%.

YouTube is now giving "grants" to podcasters who move to video-first content. Podcasts will have over 504 million worldwide listeners by 2025, so YouTube hopes that leveraging the lucrative market will help retain and attract watchers departing for other social media platforms, such as TikTok.

By the end of 2022, Amazon and Netflix will continue to dominate the OTT video streaming market, with an estimated 73.8% of all OTT subscribers tuning in. This year's growth is expected to exceed that of YouTube, which is Netflix's main competitor. By 2026, these figures will remain stable at around 2% year-over-year.

Netflix, too, is going after a new entertainment sector to keep its new subscribers coming in; gaming. Netflix bought game developers Next Games and Night School Studios last year, aiming to attract a youthful demographic. Overall, this platform will stay among the Top OTT platforms in US for the many years to come.

With popular series such as "The Marvelous Mrs. Maisel," "The Boys," and "The Wheel of Time," Amazon will continue to rule the streaming services roost. By 2022, viewership is expected to increase 4.1% YoY, reaching 152.6 million viewers.

Amazon has become a leader in sports streaming, recently securing "Thursday Night Football" and the UEFA Champions League. In addition, it is competing for broadcast rights to stream India Premier League Cricket games, which will appeal to a new demographic.

Hulu's live TV service will play a significant role in the company's expansion—an anticipated 8.2% yearly growth in viewership through 2022—as more cord-cutters seek cable alternatives. In addition, this product and its most popular ad-supported level will assist Hulu in staying ahead of Disney+ in total viewers for at least the next four years.

Hulu ranks third among the Top OTT platforms in US, just behind Netflix and Amazon, with 9% of US adult internet users ranking it at the top. With a steady stream of films and series only available on Hulu, it will be able to sustain healthy viewership numbers over the next several years.

Disney+ exclusives, such as Pixar's "Turning Red" and the forthcoming "Pinocchio" remake, continue to attract younger streaming audiences while helping the service anticipate 109.8 million viewers in 2022 or 45.6% of all OTT video viewers.

Later this year, Disney+ is expected to launch a Hulu-like ad-supported tier to compete with Netflix and other streaming services. The new subscription plan, which will have a lower price than the current one, will help bring in new viewers faster than its competitors.

HBO Max is expected to grow viewership by almost 150%, from 87.6 million people this year to 153 million by 2026, according to HBO's forecast. As major attractions for new subscribers, the network's popular drama series, such as "Succession," "Game of Thrones," and "Euphoria," has been a boost for the service.

To start, HBO Max has announced a partnership with Discovery Plus, creating a genuine adversary to Netflix regarding content and key demographics. It also signed an exclusive agreement to broadcast male and female matches for the US Soccer Federation. More and more services will seek similar agreements, contracts, and mergers to improve overall viewership. That's one way to say it will stay among the Top OTT platforms in the US in the coming years.

Peacock, the new video streaming service, announced not only a $30 million contract with Major League Baseball (MLB) for broadcasting but also a slate of streaming-exclusive political commentary from MSNBC, suggesting material that can't be found anywhere else.

It's anticipated that Peacock will see a 25% increase in viewership this year. It's estimated to have 64.3 million subscribers by the end of 2022 and capture the attention of 26.7% of all OTT video streamers.

ESPN+ is the fastest-growing OTT service which ranks among the Best OTT platforms in US. Over the next year, it's expected to see 43.7 million viewers, up 31.5% from the year before. As a result, ESPN+ is expected to have 44.6 percent of all digital live sports viewership by the end of 2022.

ESPN+ is available through Disney+, Hulu, and other platforms, attracting customers with the promise of a wide range of programming. With Disney also purchasing the NFL Sunday Ticket to boost ESPN's offerings, sports streaming is an exciting industry right now.

By the end of 2022, Apple TV+ is projected to have 38.7 million viewers in the United States (11.5% of the population), up from 11.1 million this year and just 1.4 percent of all video streaming subscriptions. By 2026, one-fifth of all OTT video subscribers will be using Apple TV+.

Apple also stated that it would exclusively air several MLB games on its TV+ platform. This, together with audiences' growing interest in streaming sports, will make Apple TV+ a more appealing option for cord-cutters in the future.

Wowza is a basic live-streaming platform for content producers who want something more. Businesses may use the platform to choose what kind of experience they want people to have while viewing their material. For example, from the tool's dashboard, creators can change playback preferences, video quality, and which networks they wish their stream to be viewable.

The platform also offers a comprehensive set of tools, resources, and APIs to help businesses scale as they grow. This OTT service comes with a configurable HTML5 video player that may be embedded. Video transcoding from the cloud also allows you to enjoy smooth live streaming. However, remember that this platform might appear daunting to set up. 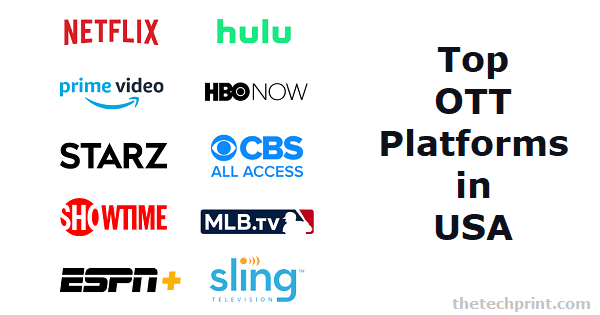 Which is the No 1 OTT platform in the world?

The answer is Netflix; it is one of the first OTT streaming services apart from YouTube when it comes to the original content. It began as a DVD rental business but has since evolved into live streaming technology.

How many OTT platforms are there in the US?

There are over 300 services in America, ranging from well-known companies like Amazon Prime, Apple TV+, Disney+, HBO Now, Netflix, Paramount+ & Peacock to some you've never heard of, such as Break Movies, BritBox, Docurama, Feeln, Snagfilms, and Viki.

Over-the-Top (OTT) services are any video or stream that delivers movies or TV shows directly over the internet to a customer. The most common OTT providers are Netflix, Amazon Prime Video, and Hulu.

Many OTT platforms include Netflix, Disney+, Hulu, Amazon Prime Video, Hulu, Peacock (formerly known as AMC Premiere), CuriosityStream, and Pluto TV. However, unlike OTT services, YouTube is a social video platform built to allow consumers to broadcast their moments on film and share them with friends.