Should OTT Platforms be Regulated 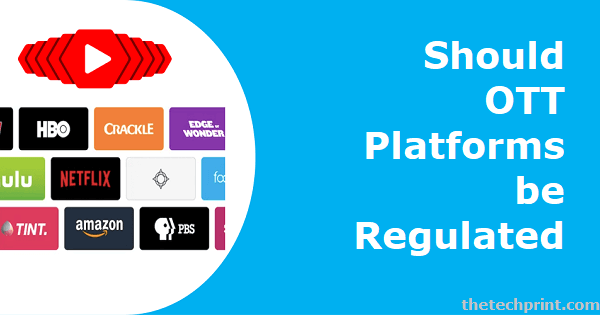 With people loving the original content on platforms like Netflix and Amazon, there is a genuine question: Should OTT platforms be regulated? Of course, there are many reasons for and against this. However, before you decide to express your concerns and opinions, let's first see how governments regulate content on OTT platforms.

The Centre's guidelines and a digital media ethics code published on February 25 have instructed Over The Top (OTT) platforms to categorize the material into five categories. These are U for worldwide, U/A 7+, U/A 13+, U/A 16+, and A (adult).

It also specifies that A-rated material should have adequate age verification procedures, making it clear that no one can view such material under 18.

The regulator also states that the content's publisher "must prominently display the rating classification specific to each material." In addition, it should include a description so that consumers can make an educated decision about whether or not to watch the program.

The government launched the consultation in May 2018 and consulted for one and a half years before making the announcement. For this purpose, it studied regulatory processes developed in Singapore, Australia EU, and the UK.

The Ministry of Communications and Information in Singapore is one of the most restrictive markets for OTT providers, with the regulatory body Infocomm Media Development Authority (IMDA) issuing rules that demand streaming and on-demand video services to categorize their material into the following categories: G: general, PG: parental guidance, PG13: parental guidance for kids under 13 years, NC16: not suitable for children under 16, M18, which indicates content intended for individuals above 18 years old, R21: those over 21.

Another factor is that platforms should warn viewers of the presence of nudity, violence, horror, and drug use. The laws of the island country also demand that these platforms' content should not be detrimental to national or public interest or public safety. Breaking the rules might result in a ban on your materials and fines.

Regulation of OTT Platforms in the EU

In the European Union, there are no legal rules regulating digital material. However, online illegal and dangerous content has been discussed in papers that are detrimental to security. There have also been discussions about monitoring content that may quickly influence impressionable minds.

OTT platforms Regulation in the US

The methods are still being discussed in the United States, with critics complaining that proposed rules from 2019 were "heavy-handed" and "unnecessary." According to experts, the FCC has yet to tackle the issue of OTT content unequivocally.

Regulation of OTT Platforms in Australia

In Australia, the content is governed by The Broadcasting Services Act of 1992, which establishes a framework and procedure. The eSafety Commissioner is in charge of enforcing digital media rules.

Indonesia has some of the most stringent anti-pornography policies in the world, which demand digital platforms to remove any depiction of nudity. Those who break such rules might be temporarily prohibited. For example, Telekom Indonesia, a government-run telecom service provider, blocked Netflix in 2016 because the site allegedly did not follow Indonesia's rules.

According to the paper, Netflix has unlawful material in the country. However, Netflix partnered with operators like XL Axiata and Hutchinson 3 to provide streaming services in the country by establishing partnerships.

Regulation of OTT Platforms in Turkey

In Turkey, the Turkish Radio and Television Supreme Council has been charged with maintaining moral standards and national security through internet content. It regulates not just what may be transmitted on television but also purchases operating licenses. If a firm begins operations without paying its license fee, it can be immediately shut down.

As the popularity of OTT platforms grows in Turkey, there is an increasingly heated debate over whether or not these platforms should be regulated. On one side of the argument are those who say that OTT platforms provide a valuable service that should not be restricted. They argue that these platforms give people access to a wide range of content they would not otherwise have and that this is a good thing for society.

On the other side of the argument are those who say that OTT platforms should be subject to the same regulations as other media outlets. They argue that these platforms are responsible for ensuring that the content they provide is appropriate for all audiences and that they should not be allowed to operate without any oversight.

Thai laws apply to the Copyright Act and Computer Crimes Act, which must be followed by any TLP platforms operating in Thailand. It has not yet published legislation or rules governing material streamed via digital platforms. However, the National Broadcasting and Telecommunications Commission of Thailand has launched an attempt to regulate such streaming services.

The major markets are China and Saudi Arabia, which have extremely tight controls. For example, Netflix was compelled to remove an episode of the comedy program Patriot Act in January 2019 because the host criticized the country's crown prince. The authorities in Saudi Arabia claimed that the program breached their anti-cybercrime legislation, a content comb through which all digital material must pass.

Surprisingly, Amazon Prime and Netflix are prohibited in China. Tencent Video and Youku, among others, fill this niche. To boost domestic entertainment material, the National Radio and Television Administration of China has restricted the number of foreign programs that may be shown in the country.

So, Should OTT Platforms be regulated?

The question of whether OTT platforms should be regulated is a difficult one. On the one hand, these platforms contain a great deal of content that benefits society. But on the other hand, there is also a significant amount of harmful or illegal content.

It is clear that there are pros and cons to regulating OTT platforms. What is not so clear is how best to move forward. Some argue that the government should stay out of it, while others believe stricter regulations are needed. As with most things in life, the answer likely lies somewhere in the middle.

It is important for policymakers and citizens alike to be aware of these issues and have an open dialogue about them. Only then can we make informed decisions about the future of our digital world. What do you think? Should OTT platforms be regulated or left alone?

Do OTT platforms need to be regulated?

Netflix is one of the most popular OTT platforms in the world. It has been praised for its wide selection of content and commitment to freedom of expression. However, some have criticized Netflix for censoring certain titles, such as The Last Tango in Paris and Fullmetal Alchemist.

Are OTT platforms regulated in US?

The Broadcasting Services Act of 1992 is the law that governs the content in the country. The statute has comprehensive rules, a complaint procedure, and a refused classification to prevent it. While there isn't a specific rule in place, there have been recommendations for preventing illegal online material.

Should there be censorship on OTT?

Unlike cable or satellite television, on OTT services, customers may choose what to watch. Furthermore, OTT platforms establish the age at which material is acceptable. There's no need to censor them or their ideas further because of it.