According to emarketer's digital video viewer forecast, Canadian viewership will reach new heights in the upcoming years. Previously, the site predicted that video viewers would hit 28 million in 2024, but now it’s believed to surpass this figure anytime. The number of people seeking more time at home has risen due to several years of restricted public gatherings. Video streamed over the internet and apps is increasingly meeting that desire. Despite this, most streamers have Netflix as one of the top OTT platforms in Canada. Other streaming services are also stepping up to offer high-quality programming, despite their more specific focus. These recent arrivals, while more specialized, provide enough material to justify a subscription.

In Canada, numerous network channels offer to stream on their websites for a price (for a limited time) or for free & paid options. Some are available for streaming but not all; some want you to have a cable or satellite television package. In comparison to your own country, cable television subscriptions may be costly in Canada. If you're considering signing up for a video streaming service, here are some of the top OTT Platforms in Canada you can opt for.

Some people hear about Disney's streaming service and ask why they'd want it. But when you scroll through what's available, you remember that they have made incredible movies over the years, including all the gems from Pixar. Plus, they are now the proud parent company of Marvel and Lucasfilm. This means Disney+ has an awesome selection of Star Wars movies and shows, as well as Marvel superhero films, plus the hilarious and endearing Pixar movies, Disney+ originals, The Simpsons, and documentary series from National Geographic. For $8.99 per month or $89.99 per year, you can subscribe to Disney+ and watch live-streaming content on your computer or phone.

You can access YouTube Premium's features for free, but there are some additional benefits. For example, you get an ad-free experience watching videos or listening to music on YouTube Premium.

You can use other applications while viewing or listening to the content. You can also save films to watch later and access YouTube's new music app, YouTube Music Premium. Finally, Google Music is accessible to Canadian subscribers without cost. A $6.99 per month rate for students and a family plan that costs $17.99 per month so that you can share your membership with up to 5 people in your house.

For serious sports fans, fuboTV is one of the top OTT platforms in Canada to use. Since then, they began focusing entirely on soccer, but they've expanded their offerings to include most sports, including hockey, football, cycling, and baseball.

You can also watch sports news, shows, and movies on Fox Sports Go, which recently added some network TV series and films that aren't sports-related. Each membership also comes with 30 hours of Cloud DVR so you can record the games you missed live. Subscribers to Fubo Premier get access to the live-streaming service for a monthly price of $15.99, which lets you watch live on two devices simultaneously. Then, for another $5.99 each month, you can add streaming for a third device.

Apple TV+ is one of the net top OTT platforms in Canada offering from Apple and its response to Netflix. They have exclusive Apple original content that you won't find anywhere else, including movies and documentaries, TV shows, and kid-friendly viewing options.

Apple didn't hold back when it came to creating programming for this service, and they secured big names like Oprah Winfrey, Steven Spielberg, Octavia Spencer, and Jason Momoa for projects. The service is still young, so the content selection isn't as robust as some of Apple's previous streaming services. Every month, Apple adds fresh and original material with a monthly subscription fee of $5.99 or $59 per year if you buy an Apple TV+. Thanks to the subscription fee, you may share your account with up to five family members.

Hayu is NBC's first foray into the world of on-demand streaming, and it specializes in reality television. You'll discover anything from real crime to culinary, dance competitions, and other forms of reality programming on hayu, including dating shows, home & renovation programs, lifestyle shows, and so much more.

Hayu has a restricted focus, so there isn't as much material here as you may find on other sites on this list, but it does have more than 250 titles. In addition, the first month is free for Hayu's pricing plan, which costs $5.99 per month.

The Canadian Broadcasting Corporation will soon launch its streaming service, CBC Gem. As you would expect, it's jam-packed with great Canadian programming, including all of the shows, documentaries, films, and news programs you can find on CBC TV. There are three service levels available: two are completely free. Consider it among the top OTT platforms in Canada as you’ll get most of your local content here.

To access the site without having basic access, or to sign up for a free Gem membership to live stream CBC TV, watch past and present episodes, and get ad-free access to children's programming, go here. Finally, you may pay for the service for a small cost to enjoy your favorite shows ad-free. You may access all the content for free, but you may also subscribe to the premium version for $4.99 a month to remove ads and gain additional functionality.

The Roku Channel is available on the Roku device and many smart TVs. This streaming service is distinct from others since it combines other channels and streaming services and presents them in one location. Furthermore, it provides access to many free, subscription, and rental channels.

Tubi includes many movies, TV shows, and other entertainment options. You can watch television programs and films on Tubi, Cineplex Store, Red Bull TV, TED, and worldwide networks. The basic version is free; however, you'll have to deal with advertising. There are also subscription services (like Netflix) that you may pay for and premium on-demand episodes and films (through Google Play Movies & TV).

DAZN is another sports streaming service since it is focused on live and on-demand sports. With this streaming service, you can watch ice hockey, baseball, soccer, boxing, rugby, tennis, cricket, and especially football.

You can watch every season's football game since you can access NFL Sunday Ticket, NFL RedZone, and NFL Game Pass when you subscribe. DAZN costs $20 a month but is discounted by 40% if you sign up for an annual subscription for $150.

The Criterion Channel is a movie streaming platform operated by the Criterion Collection. It’s a home video distribution company that hosts movies. If you love movies, this is one of the top OOT platforms you should head to.

They have a vast collection of recent and classic movies and indie, arthouse, international, and Hollywood films. Classic movies dating back to the 1970s and 80s are also available through this service. $10.99 a month or $99.99 a year is all you pay for their service (cash option). Do you know if this is the service you want? Don't worry; they have a free trial period of 14 days.

Sundance Now is a streaming service from AMC Networks. If you're looking for movies, TV shows, and documentaries that are slightly different from what you find on other platforms, this is the site for you.

There's a wide range of content on Sundance Now, from gripping dramas to heart-wrenching documentaries. The best part is that there's something for everyone; whether you're a movie buff or a casual viewer, you'll find something to enjoy on Sundance Now.

A monthly subscription to Sundance Now costs $6.99, but you can save 15% by signing up for an annual subscription for $59.99. You can also start with a free 7-day trial to see if the service is right for you.

Conclusion of OTT platforms in Canada

There are many other great streaming services, but these ten are some of the top OTT platforms in Canada. Whether you're looking for a specific type of content or want to explore what's available, you're sure to find something that interests you on one of these platforms. So what are you waiting for? Start streaming today! 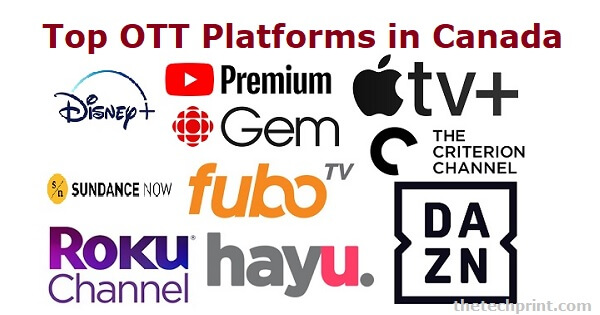 What is the best streaming platform in Canada?

The answer is inarguably NetFlix. It is Canada's most popular streaming platform, with over 10 million subscribers. In addition, it has an extensive library of movies, TV shows, and documentaries. The monthly subscription fee is $9.99. You can also get a free 1-month trial.

How many OTT services are there in Canada?

Approximately 50 OTT services are available from over 35 different providers. In 2020, Canadian OTT access revenue was expected to have increased by 35%. According to Convergence Research, access revenue will rise by 32% between 2021 and 2023 to $2.71 billion.

Is there Hulu in Canada?

Hulu's availability in Canada has now been expanded to a modest level! Disney Plus's Star service, which launched recently, also contains some Hulu titles. Other than that, Crave TV and Amazon Prime include some original Hulu material.

Is HBO MAX in Canada?

HBO Max is not accessible in Canada due to a licensing issue.