How to Record Call on Poco Smartphones

Google announced it would no longer allow third-party apps to use the Accessibility service API for call recording. This blows away several third-party applications and users who rely on them to record calls. There is still reason for optimism, though, as the restriction does not apply to built-in system programs. Users may still record calls using the manufacturer's built functionality. MIUI, Realme UI, OxygenOS, ColorOS, and other custom skins include call recording capabilities in their phone dialer application.

Despite the plethora of extra features, many modern mobile phones still lack a primary call recording option. Recording a call is helpful for many reasons. Xiaomi Poco smartphones frequently need to be used to record a call. Finally, Poco added a call recording feature to its model X3 (for Indian users only). If you have a Poco smartphone and need to know how to record calls on a Poco device.

Xiaomi has replaced its custom dialer app on POCO devices with the Google Phone app. If you still have MIUI's dialer software pre-installed on old phones, follow these steps to record a call:

How to Record Call in Poco using Google Voice

To use the Poco call recording feature, simply:

Now, whenever you place or receive a call using your Poco smartphone, the call will be automatically recorded and saved on your device. To access recorded calls, simply open the Google Voice app and tap on the "hamburger" icon in the top left corner (three horizontal lines). From the sidebar menu that appears, select "Recorded calls." Here, you will see a list of all recorded calls stored on your device. Tap on any call to play it back.

Why is call recording missing on my Poco M3 / M2?

The Xiaomi Poco M3 and M2 do not feature call recording because you are using the global edition. Yes, the Google Dialler app is included on the Global version of the Redmi phone rather than Xiaomi's Mi Contact and Dialler application. For now, Google dialler apps do not have call recordings. Despite this, they are working on adding it to their app.

If you have a Xiaomi phone running the Global version of MIUI, the call recording functionality will not be available. The optimum way to obtain it is to download the Miui EU version. It doesn't include advertising and advertisements; it includes Miui's dialer with native call recording. You'll also need to unlock your device's bootloader before installing it.

How to Record Call in Poco M2/M3 Phones

The only way to record a call in the Poco smartphone global version is to use a third-party call recording app such as Cube ACR App.

How to Record a Call on Poco X2 and Poco F1

Poco X2 and F1 come with a call recording feature built-in. To record a call: 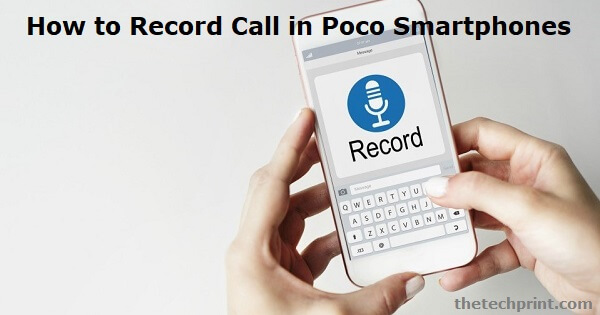