Pros and Cons of Android Vs iPhone

The android vs iPhone debate continues as Google and Apple bring out the best of their innovative technology to the dance. According to Statista, the number of android smartphone users in the US will reach 130 million by the end of 2021. On the contrary, the number of iPhone users globally touched 1 billion in 2020 already, with iPhone being the top-selling smartphone in the US. Though it’s hard to point out the better OS, will help you decide what suits your needs.

When deciding whether to buy a new premium mobile phone, one of the first questions is choosing Android or iOS. So, this speculative guide will clear up any confusion you have. The iPhone OS and Android OS are two well-known operating systems (OS) for cell phones and tablets. Android was created later than iOS, so it has a lesser credit score than iOS.

Steve Jobs and Steve Wozniak started Apple in 1976. In 2007, they released the first iPhone, which they named apple product. To create mobile apps for iPhones, they designed iPhone OS or iOS. Andy Rubin developed Android in 2008; it is the operating system for all Android devices.

Because Android is open-source, there are numerous apps on the Google Play Store available for free. Google controls this Android, and they provide the Android OS to all other mobile device manufacturers.

What are the Pros of the iPhone?

iPhones account for 65% of smartphone shipments in the US alone, which means users like the authentic features of Apple’s devices. The following are some pros of the iPhone you should know.

Even though you can find many applications within the app store, Apple has selected potentially useful apps and features not available for Android. For example, the iPhone 6s has a 3D Touch feature; it is easier to access shortcuts in different applications thanks to this feature.

Apple was one step ahead in creating good cameras in smartphones. iPhone manufacturers have been doing a good job since the first generation of the camera. The latest iPhone 13 Pro is loaded with super powerful camera features such as a redesigned lens, powerful autofocus system, and a new Ultra-Wide camera. You can capture crystal-clear images from your camera, whether it's abstract art or a tiny dewdrop.

In addition to being higher quality brands, Apple products are also supported by more accessory makers than Android devices. This means that if you want your mobile device to stand out from others with unique accessories, you will get it easier on iOS devices. Unfortunately, this is not always easy because many third-party manufacturers do not make their accessories compatible with Android. Thus, the argument about Android vs iPhone speaks in favor of the latter.

4. It is easier to use than Android

Apple's iOS is an advanced operating system that only runs on iPhones, so it has more benefits when you deal with applications. This is especially important for high-quality games with 3D Touch technology, which you can use on the latest iPhone models.

What are the Cons of the iPhone?

Now come the downsides of the iPhone which can be many depending on how familiar you are with iOS and whether you can afford one.

1. You have less choice in hardware and price

When there are fewer people who design your phone, then there will be fewer choices. In addition to being limited by those who control the software side of your device, you also have a limited number of hardware options for your device as well as a higher price tag. The former becomes the talking point in Android vs iPhone devices. Android devices do not have a big price which is a disadvantage of iPhone devices over Android.

iOS devices are manufactured by Apple Inc. only. On the contrary, Android has many manufacturers that produce separate versions of the OS for their devices. This is because Google releases the code base of its OS, and then manufacturers modify it for their phones/tablets. As a result, there are multiple versions of Android on different devices.

iPhone does not allow the installation of apps outside its App Store, so no one else has access to your data. This security can turn problematic as you are forced to use paid apps exclusively available at the Apple Store.

iOS provides more security but less freedom when compared with Android, as said above. You cannot root or jailbreak an iPhone device because it's not possible to install third-party applications on your phone. While some manufacturers have provided tools so their users can do this, iPhones simply do not allow anything unless its official store approves it first.

Lack of external memory is one of the cons of iPhone devices talked about. On the other hand, Android smartphones give users the freedom to expand their memory as per their needs.

As the debate comes halfway, you’ll be informed about the pros of Android phones, along with some reasons why you should have one. Android devices have strong selling points to attract global customers, and here are a few worth mentioning.

Android OS is an open-source operating system, which means we can customize it to meet our needs. If you're tech-savvy and like trying new things with your phone, Android smartphones are ideal for researching mobile phones.

3. Availability of tons of free Apps

Whether you enjoy playing video games on your smartphone, listening to music, or watching videos, there are so many apps that can keep you entertained for hours. Apps like Spotify, Dropbox, and Flipboard also help us manage our daily lives better by providing us with all types of information in one place. Many of these apps work very well on Android devices due to their open-source software.

Although you could argue that there's no such thing as a cheap smartphone, an Android device is usually cheaper than iPhone models, especially the flagship ones like the Samsung Galaxy S7 and Google Pixel XL. Whether you can afford it or not, there are always options for Androids that will fit your budget.

If you buy your phone directly from Google or another manufacturer, then you can forget about seeing unnecessary apps pre-installed on your device.

Yes, along with the good, there are bad points about Android-based smartphones. You should be able to assess the cons of Android devices to clarify the comparison of Android vs iPhone with these in mind.

Since there are so many versions of Android operating systems and manufacturers modify them, hackers can easily find vulnerabilities in the system. It's also easy for malware to take over your device if you download apps from unofficial sources. These aren't problems for iPhone users because Apple only approves applications that work correctly on its devices, unlike Google, which allows everything on Play Store.

If you have a question about your phone or an application, it's very hard to get help directly from Google or another Android manufacturer. Instead, you'll be directed to their online forums where other users will try to answer your questions - except most of them are not experts. Meanwhile, Apple offers customer service because it has all the information it needs about its devices.

The main reason Androids have shorter battery life than iPhones is the customization options that manufacturers provide. For instance, you can choose to display many items on your home screen, which will drain the battery faster than usual.

Furthermore, apps running in the background sometimes consume more power than expected. However, tons of Android applications are available today that can help users monitor and increase their phone's battery life.

Although Android's open-source nature makes it easier for people to develop powerful applications, it also means that malware authors could also create virus-carrying programs. Although most official app marketplaces require applications to be checked before they're published, some malicious apps can still slip through their screening process - making it a good idea for Androids users to run an antivirus app on their devices.

Android phones have varying levels of security depending on which manufacturer created them. Google even has full access to all Android devices because it's the one who develops this open-source OS. This puts user privacy in a dwindling position as the device manufacturer and Google have access to your private information.

Which is better for you?

At this point, you might think that Android is way better than iPhone, and well, it all depends on your preferences and what you need your device for in the first place.

So, if you want a smartphone to check email and social media accounts and take photos and browse the web, we recommend getting an Android because there's a wider selection of cheap devices.

However, if you value privacy and security more than anything else or don't like Apple's closed-off operating system - then getting an iPhone makes sense instead. Whichever smartphone OS you pick, remember that they both have their pros and cons.

Why iPhone is better than the android?

Apple knows a lot about its users. Perhaps too much; while this might annoy some people, it also means that Apple can make sure that your personal information stays private.

On the other hand, Android manufacturers only want to know limited information about their customers to send relevant advertisements or create user profiles.

However, this approach has one drawback; hackers and malware authors could easily break into your Android device because it lacks proper security measures.

Why Android is better than iPhone?

At the moment, there are dozens of cheap Androids available for customers who don't want to spend more than $200 on a new phone. Meanwhile, the cheapest iPhone is Apple's SE model with 16GB of storage space and no support for wireless charging or biometric unlocking, which costs $399. The price tag is too much of a worry for many users when it comes to camera quality and storage.

Android beats iPhones when it comes to customization

Most people buy an Android because they want to customize every aspect of their device's appearance - from ringtones, wallpapers, cellular data usage, widgets, icons, or boot animations. However, you can only change your iOS wallpaper without jailbreaking your iPhone, which is a major downside.

In addition, you can use various launchers on Android that allow you to customize your device's look and feel according to your personal preferences.

Hundreds of them are available for users who want more from their smartphones than just calling and texting people. 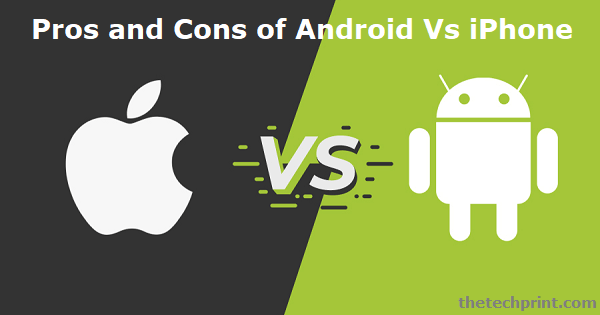 Is Android better than iOS?

Video calls can also be made natively on iOS and Android. The disadvantage of iOS is greater customization and flexibility than that of Android. On the other hand, Android is more free-wheeling, which means you may use a wider range of phones to begin with and then customize your operating system to your liking.

Which is safer Android or iPhone?

A study conducted by two professors from the Georgia Institute of Technology and North Carolina State University discovered that a considerably greater proportion of mobile malware attacks Android than iOS. This operating system runs Apple products. After all, it only takes one perfect form of Android malware to wreak as much havoc as thousands of copycat iOS threats.

Are Android cameras better than iPhone?

More Android phones than iPhones offer more features. However, the iPhone can provide a wider range of functions than its competitors. It might not have the most megapixel camera, for example. However, its wide dynamic range allows it to capture stunning images in various difficult lighting situations.

What is the main difference between iPhone and Android?

The most obvious difference between the iPhone and Android is their appearance, evident right away. In addition, the style of the interface, applications, and emojis varies, with the iPhone generally considered to have a more sleek and cleaner look.