Pros and Cons of Ubuntu

Ubuntu is a popular Debian-based GNU/Linux distribution among programmers and has its own desktop environment, Unity. Ubuntu is an open-source operating system with one of the most secure Linux versions. The 12. x version of Ubuntu OS was released recently, providing better friendliness and user experience than previous versions. Because it does not require technical expertise to operate, it may be readily used with any other operating system. In-depth, let's look at the pros and cons of Ubuntu OS.

What are the Pros of Ubuntu OS?

Let's first look at the compelling pros of Ubuntu OS and find out why it is one of the best-suited OS for your requirements.

1. Open-source and free to use

Since Ubuntu is an open-source operating system, it is available for free. You can use it without any license fee. This also means that the source code of this OS is freely available and can be modified or redistributed by anyone.

As known to everyone, Linux is a very secure operating system. That's because it has built-in security features that protect your computer from malware and virus attacks. Ubuntu is no different. It is a highly secure OS that completely protects against online threats.

3. Easy of use is one of the known pros of Ubuntu OS

One of the best things about Ubuntu is its user-friendly interface. This makes it extremely easy to use, even for first-time users. Everything is well-organized and easy to find.

Ubuntu has a wide range of applications that you can use for different purposes. You will find everything you need in Ubuntu, from the office suite to media players.

Ubuntu is updated with the latest security patches and features. This ensures that your system is always up-to-date and secure. Having an updated OS for free is also one of the notable pros of Ubuntu Operating System.

Ubuntu is a Linux-based operating system with a large community of highly trained developers. If there is any new software upgrade, and you run into difficulties with it, the active community can assist you in resolving the problem because such canonical updates will be available after six months.

Ubuntu makes it easier to free up space on your computer instead of slowing down or crashing your system. This operating system is highly efficient since it lacks a graphical user interface (GUI) compared to other applications.

What are the Cons of Ubuntu OS?

Like any other operating system, Ubuntu also has a few drawbacks that you should be aware of before installing it on your computer.

One of the biggest cons of Ubuntu is its limited hardware support. It doesn't work well with certain types of hardware, such as NVIDIA and ATI GPUs.

2. Not suitable for gaming

Ubuntu is not the best operating system for you if you're a gamer. It doesn't support certain games and can be pretty slow when playing resource-intensive games.

Another big drawback of Ubuntu is its poor driver support. Many manufacturers don't provide drivers for their devices compatible with Ubuntu. This can cause severe problems if you want to use your device with this OS.

4. Unity interface takes some time to get used to

The Unity interface of Ubuntu can take some time to get used to, especially if you're coming from a Windows or macOS background. It cannot be apparent initially, but you'll get used to it eventually.

5. Not as popular as Windows or macOS

Ubuntu is not as popular as Windows or macOS, so you'll find fewer software programs and games compatible with this OS.

6. Restricted MP3 Support is one of the common cons of Ubuntu OS

Working with Ubuntu may be difficult if you're a video designer or editor. Unlike Windows, which does not require external software to operate a video, Ubuntu does.

Users have complained about driver difficulties and, on occasion, the hardware specification does not match the Windows 7 compatibility. The other most significant issue with Ubuntu is the graphical flicker problems reported by many users. Because of its hardware problem, certain users had experienced difficulty in repairing their existing soundcards.

Conclusion on the pros and cons of Ubuntu

Ubuntu is an excellent choice for desktop users looking for an alternative to Windows or macOS. It has a user-friendly interface, and many applications are pre-installed so you can get started immediately. However, some drawbacks exist, particularly regarding software support and hardware compatibility. If you’re comfortable using the command line and don’t need specific applications that aren’t available on Ubuntu, then go ahead and make the switch – you won’t regret it! But if you want a more seamless experience or need specific software for your work, it might be best to stick with Windows or macOS for now. 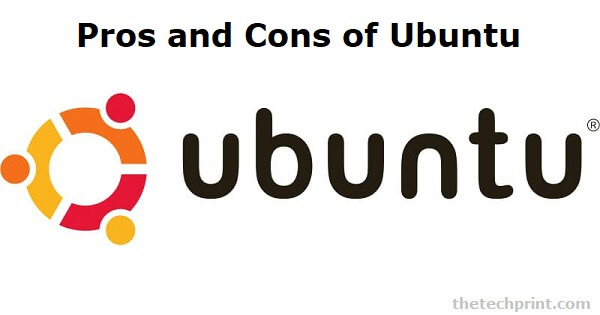 Is Ubuntu or Windows better?

Ubuntu is much more prevalent among developers and testers since it's highly robust, secure, and quick to code. Users that want to play games and work with MS Office or Photoshop will prefer Windows 10 because of its simplicity.

Is Ubuntu safer than Windows?

There's no way to avoid Ubuntu being more secure than Windows. By default, user accounts in Ubuntu have fewer system-wide permissions than those in Windows. This means that if you want to make a change to the system, such as installing an application, you must type your password first.

Why is Ubuntu so much faster than Windows?

Ubuntu does not load additional applications on startup except for the system itself and the GUI. Many programs are loaded when you start your Windows session, many of which you don't need.

Is Ubuntu good for everyday use?

Although not all applications are available in Ubuntu or the alternatives don't have all the features, you may use them for daily activities such as surfing the web, office work, video production, programming, and even gaming.

Why is Ubuntu so slow?

Over time, your Ubuntu 18.04 installation will grow sluggish. This might be caused by a lack of free disk space or the fact that you've downloaded many programs.