Pros and Cons of Video Games

Video games are made for users of all ages and gender. Playing video games is a rich and entertaining source of fun for everyone. From PlayStation to Motion gaming, the world of video games has transformed within a decade. Video games have been a popular form of entertainment for decades now. Whether you're playing against your friends or just taking a break from the real world, video games are a great way to spend time and relax. However, there are pros and cons of video games that you can experience depending on your age, lifestyle, and even behavior.

You can find games in different genres such as Battle Royale, Arcade, Racing, arts and craft, and even learning. Experts suggest there are numerous health benefits of video games that affect players depending on their age and psychology. Here are some of the pros of video games that might interest you.

One of the advantages of playing video games, especially active ones like Nintendo Wii or Sonic Robo Blast III is that they are actually quite physically demanding. Just up and running around for hours on end can give your heart a workout just as much as climbing stairs at top speed in real life would.

For people who don't get enough physical activity in their daily lives, this can be great motivation to play more and become fitter overall.

For people who are shy or just not that great socially, video games can be a great way to learn how to interact better. For example, if you're playing online against other players, it's essential to communicate and work together towards the goal of winning.

This will give you practice at coming up with strategies for overcoming obstacles in your day-to-day life. These benefits may vary depending on what kind of game is being played, but overall there are many advantages to gaming when it comes down to learning valuable interactions skills.

3. You can learn about the latest technology

Video games are a great way to get more familiar with the latest technologies on the market. For example, if you're playing a game that requires an Xbox One controller and you don't have one yet, it might be a good idea to save up for one or buy them at your local electronics store. It's incredible what video games can teach us these days.

4. Cognitive development is one of the many pros of video games

Video games are a great way to practice problem-solving strategies and critical thinking skills. By playing various types of video games from different genres, you will increase your ability to think quickly on the spot and strategize better for future events that may come up in life. This is why they're so beneficial for children who have just started learning how to play them at young ages because it's preparing them for their futures.

Another benefit of video games is that they stimulate brain activity. With all the strategies involved in most games, you have to pay attention closely so that you know what moves your opponent might make next, which helps sharpen your mind. This brain activity also causes new neurons, which is excellent for warding off diseases like Alzheimer's.

What are the Cons of Video Games?

While there are numerous benefits of playing video games, spending too many hours gaming can turn their positive effects into negative ones. Consider the following cons of video games if you have just planned to delve into gaming without knowing which games are suitable for you.

While video games can be a great way to relax, there is too much of a good thing. Video games provide an escape from reality that some people get addicted to. You should be able to do what’s more important than games, work, studies, or family.

When you're playing video games all the time and start neglecting other essential things in your life like school or work, this could become a problem for you down the line. It's okay to play video games every once in a while, but it should never take over your entire life.

Another demerit of video games is the inevitable frustration and anger you will feel. Many gamers tend to experience feelings of rage when they can't accomplish something or win a game, leading to negative emotions.

Video games require good hand-eye coordination and problem-solving skills, so it's easy for people who don't have those abilities to become easily discouraged, leading them to quit playing altogether. This means that this group of players ends up missing out on all the fun.

For some people, video games can actually lead to feelings of depression or even social isolation. It's essential to take breaks from playing every once in a while so that your brain has time to process things. If you find yourself feeling more depressed than usual while engaging in this activity, it might be a good idea for you to cut back on the amount of time spent playing until you feel better.

Computers can be straining on your eyes when they are used for long periods. Eye strain is a significant disadvantage of playing video games. It can lead to computer vision syndrome, which causes eye pain, blurry or double vision, headaches, dry eyes and burning sensations in the eyes.

If you experience any of these symptoms while gaming, it might be best that you take frequent breaks from doing so! This way, your eyes will have a chance to rest every once in a while before going back at it again.

Another disadvantage of playing video games is that most people tend to be less active while engaged in this activity. Playing for hours on end doesn't burn very many calories, so you might find yourself feeling more sluggish than usual after taking a break.

This can lead to an increased risk of obesity which puts your health at risk. To avoid this problem, make sure to take frequent breaks from gaming and engage in other forms of physical exercise.

Conclusion on Pros and Cons of video games

Video games are an integral part of our modern culture, but they come with benefits and problems. How do you cope with the facts certainly depends on how you select your games. All in all, understanding the pros and cons of video games should help you decide when and where you need to draw the line. 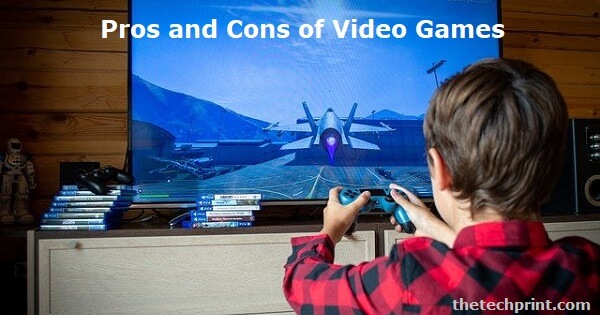 What are the positive effects of gaming?

Are video games good or bad?

Certain video games have indeed been shown to enhance hand-eye coordination, problem-solving abilities, and the brain's capacity to comprehend data. However, excessive video game playing might be detrimental. If you're always inside playing video games, getting enough active play and exercise isn't easy.

How long should a 13 year old play video games?

The American Academy of Pediatrics recommends that kids aged two through five spend less than 30 minutes on school days and no more than 2 hours per day on non-school days.

Do video games rot your brain?

But new research has revealed that much of the time spent playing video games may not have been rotting your brain, as your mother or father claimed. In reality, if you spent your childhood playing Sonic and Super Mario, you were biochemically preparing your memory for the rest of your life, according to the findings.

Is gaming bad for your eyes?

Excessive video game usage can raise the risk of computer eye syndrome and induce dry eyes, focusing difficulties, blurry vision, and headaches. In addition, it's all too easy to lose track of time while playing a game and forget to take breaks.