Known for mostly its short-length posts, the social networking platform is a favorite place to hang out for celebrities, sportspersons, business leaders, and politicians. Twitter currently has 330 million active users, mostly in the US, Japan, India, and the UK. If you have decided to join the Twittersphere for business or personal use, you should be familiar with the Pros and Cons of Twitter to decide if it’s for you.

The Twitter world is a fast-paced place where information and opinions fly around the virtual globe. Whether you're using it as a personal space or want to use it for business purposes, there are advantages and disadvantages of both. Let's start exploring some.

Staying along with influential users is one of the greatest pros of Twitter for everyone. You get to communicate with personalities of higher status and share your opinions with them. The best part about tweeting is, if it’s impactful, it will catch the eyes of millions instantly. Here are some other benefits of using Twitter.

Twitter is incredibly easy to set up even if you're not the most computer-savvy person. It will only take a few minutes. Once you set up your account, using Twitter becomes like second nature - there are no complicated menus or settings unless you want them but instead straightforward buttons for tweeting your thoughts out into the world.

2. You can use Twitter to promote yourself and your brand

The possibilities for using Twitter as a business marketing tool are endless: you could set up an account, create some engaging tweets and then sit back and watch the followers roll in, or sign up with one of many companies offering free and easy ways to promote your business. Twitter is a perfect tool to generate ideas & sales, increase your brand awareness, build a better network, and influence the entire business community.

3. It is a great way of staying relevant

One of the most effective pros of Twitter for an individual or company is how it can keep you relevant in your industry. There are many reasons why this might be important; perhaps you want to stay ahead of your competition, provided they're using Twitter too, set yourself up as an industry leader, or attract some potential clients.

4. Network building is one of the noted pros of Twitter

One of the most powerful benefits of Twitter for businesses is how it allows you to connect with other professionals, clients and brands. This opens up all sorts of opportunities; for example, if you were running a beauty salon in London, tweeting about an event at the local gym could lead to interesting conversations that might help your business.

Therefore, Twitter is a great way to connect with people who share your interests and passions. You could start using it just as a personal hobby, but it will help you meet like-minded people.

5. You can use it to get exclusive information

One of the most useful things about Twitter is gaining access to information that isn't available anywhere else, which is especially important for everyone. For example, if there was a new promotion at your favourite restaurant, tweeting them might lead to an insider code offering something special, but only until they run out.

Even if your sole purpose is to find the latest news, you can log on to your Twitter account and enjoy the news holding your coffee cup.

Evaluated Cons of Twitter for business and Personal use

A total of 1.3 billion accounts are created on Twitter, but only 330 million users are left on this platform, out of which 145 million visit daily. Compered to Facebook with 2.89 billion users and Instagram with 900+ million active users, Twitter falls short on figures. Some of the most prominent cons of Twitter that come to light are as follows.

1. You can experience a lot of negativity

This may not be an important point for those using Twitter as part of their personal profile, but it is worth bearing in mind if you're thinking about setting up a business account.

For example, there might be some cons of using Twitter, such as unfavorable feedback or simply trolls - this could affect your business, especially if it's a smaller company.

However, the best way to avoid this is by keeping an eye on your content and blocking or reporting any negative users who make threats of violence or post illegal material. Twitter has specific rules about what can be posted online, so it pays to know them.

Hackers have a habit of breaking into Twitter accounts, especially politicians and business persons. In December 2020, The Dutch Ministry confirmed that Donald Trump's Twitter account was hacked.

In a 2020 incident, the Department of Financial Services reported that a 17-year old hacker and his accomplices breached Twitter's network and seized control of dozens of Twitter accounts assigned to high-profile users.

The risk of having your Twitter account hacked is always there, which can happen if you're not careful. However, there are many ways to protect yourself, including setting up two-factor authentication.

Visit here to know what to do when your account is hacked.

3. Censorship is one of the cons of Twitter for free speakers

Psst! Your tweets are being monitored. Many nations have implemented stricter rules on what people tweet and how it affects their image. Tweeting without considering the consequences can be problematic if you're using it as part of your business.

An offensive or dissenting post could get your account blocked or removed permanently. Some believe Twitter Censorship as a thoughtful action by governments, while others believe it's just ridding their freedom of expression.

Learn here about when and why your content may be withheld.

4. It can be expensive

You got to pay to trend on Twitter. Another potential disadvantage of using Twitter is the costs involved, making it less attractive to smaller companies. For example, you have to pay extra if you want more features or access certain types of analytics on Twitter.

However, things like advertising and promoted tweets can help reduce costs and make Twitter more useful for business owners, which is worth considering, as it could give you a major advantage over other companies.

Another potential problem is Twitter character Limit, which might make it hard to get your message across without sounding too short or disjointed. This can be problematic for businesses who are looking to engage with their audience and promote themselves on social media through lengthy posts.

However, this depends on what you're using Twitter for and how you use it, especially if you're looking to create a personal profile. Tweeting links or quotes with relevant hashtags can help your followers find what they need. However, Twitter has many disadvantages, such as character length, which usually is no more than 280 characters.

Twitter is not really for students, at least in terms of using a personal profile. For example, Twitter has many drawbacks, such as its user-base, which consists mostly of adults and business people.

This can be problematic if you're looking to start your account with the main purpose of engaging with other students and sharing your studies, as it's difficult to find them on Twitter.

Is Twitter for you? Is it your social media platform of choice, the one thing you can’t live without? If not, maybe it doesn’t have a place in your marketing or social networking platforms. But if you do use Twitter to promote and share content from other sources and creating in-trend original tweets, this powerful tool might help grow your business. The rest is how you acknowledge the pros and cons of Twitter for business or personal growth. 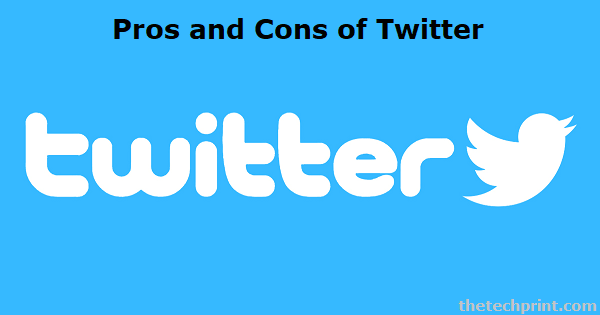 Users must express tweets succinctly because of the 280-character restriction on Twitter posts. Users are not permitted to post videos. Sending a maximum of 1,000 tweets each day is possible only with users' permission.

After you've created your account, all you have to do is type. Then, you just write things down, and bam. The first network to employ hashtags was Twitter, making it simple to discover intriguing themes to follow by indexing keywords and subjects.

Even though Twitter has been operating for longer, Instagram boasts a larger monthly active user base. With more than 500 million tweets sent out every day compared to 80 million photographs posted every day, Twitter maintains a lead for content sharing.

If you're aware that your target audience is on Twitter, it's worth having a presence there. Even if they aren't, you may want to check-in for the sake of fun and use Twitter personally. So, yes, this is still a relevant platform. And no, Twitter isn't completely exhausted.

Twitter is not as dangerous or invasive as Facebook, and the social network isn't associated with the same security and privacy concerns. Applications - There are thousands of Facebook applications, but many offer little value are often intrusive, if not abusive.