Twitter lately joined the party with Tumblr and Facebook after governments decided to put Social Media regulation in place. It seemed like a considerable move for many, while a share of users disagreed with their government since social media is the only place to voice their concerns. Before you know the Pros and cons of Social Media regulation or censorship, it’s important to know what it does exactly.

How does Social Media Regulation affect everyone?

Remember when social media was just a place to keep track of your friends' lives and post with that one person you don't see often but want to stay in touch with? Now, you check it first thing in the morning and last before bed. It's become an ultimate source for almost everything you see around the internet, such as hate speeches, cyberbullying, shaming, and trolling.

These changes include censorship of offensive language, infographics, and, worst-case scenario, suspending your account permanently. The Social media regulations are equal for everyone, be it the former US President Donald Trump, the Afghan President Amrullah Saleh, or even a celebrity such as Kangana Ranaut.

But what if you don't have anything to do with something posted by someone else, and you get to pay for it? Because someone else posted something very offensive that you were tagged in when these kinds of incidents occur, it's not just your account that is affected; this can also ruin professional relationships you've worked hard to build.

Social Media Regulation protects us from cyberbullying & trolls Cyberbullying is an unfortunate reality. As technology advances and communication becomes easier than ever before, so do those who choose to use it as a weapon rather than a tool. This can make the Internet a miserable place to be when someone is looking for a fight or wish ill will upon you. Although social media regulation may seem like it's affecting our freedom of speech, in reality, no one should feel bullied on their own personal Facebook.

Social Media Regulation protects users from cyberbullying & trolls; Cyberbullying is an unfortunate reality that has become a huge problem for users of all ages. As technology advances and communication becomes easier than ever before, so do those who use it as a weapon rather than a tool. Keep in mind some pros of Social Media regulation to figure out why it’s necessary for today's sensitive world.

1. Social Media Regulation is important to keep undesirables away

Social media is the easiest way to slander or taint the image of publically known people or organizations. Therefore, social media censorship is the right tool to handle such miscreants who can mislead and manipulate users and turn their opinions negative. Although social media regulation may seem like it's affecting our freedom of speech, in reality, no one should feel bullied on their own personal Facebook.

If you've ever been a victim of online bullying, then you know just how horrible it feels. With Social Media Regulation, this is much less likely to happen since there are protocols that prohibit cyberbullying and other forms of abusive behavior.

In addition, keeping people accountable for their actions online helps reduce the risk of innocent bystanders being attacked by strangers hiding behind a computer screen.

3. More Transparency is one of the pros of Social Media Regulations

The regulation allows users to feel like they control their accounts and who gets access to their private information. Also, no longer will you have to worry about companies collecting your information without you knowing. You can stay away from people with illicit or harmful intentions.

No one likes to be the center of attention for all the wrong reasons. Social media regulation helps promote positive social values that can greatly improve people's attitudes towards life. This is something you can agree on. Putting language and words under censorship helps society, especially kids, stay safe from bad influences.

5. Having fun not being afraid

With everything posted on social media under control, you can read positive stuff only without fearing something anti-social or anti-national. You shouldn't have to question every word or image before posting it online because you're afraid someone somewhere might find it offensive.

Instead, everyone should reserve judgment until after both parties have had the chance to communicate what was said or done, so there is less confusion down the road.

What are the cons of Social Media Regulation?

From the inability to express yourself freely to political systems turned into a dictatorship, social media regulation has several cons to consider. Many intellectuals have raised questions to this censorship, citing that doing so leads to biasness and suppression of citizens.

When you are limited to what you can say or share, it is difficult for people to express themselves if their opinions are too controversial. This should be worked out in your offline life but still allows others to agree or disagree with you publicly while respecting everyone's right to have an opinion.

2. You won’t be allowed to talk about sensitive issues

If you had some bad luck and were tagged in an offensive post without realizing it, the best course of action would be not to engage with this person by responding. But if they continue after being warned multiple times, then report them. That way, they get punished instead of yourself getting penalized for simply being a part of the conversation even though it wasn't originally your intention.

3. What About Independent Media

Censorship takes a jibe at dissident speech; the organizations and firms dominant on social media have a different opinion. Most of the Independent media exist in the far-flung states where mainstream media is impossible to reach and report about.

Provided the flow of information leads to biasness in everyone’s perception, it’s most likely that people would remain unaware of deviated from the reality by the lack of truthful data.

4. Discrimination is one of the cons of social media censorship

The dominant sides of society can easily leverage social media censorship by misrepresenting reality and hiding the matters relevant to minorities. If authorities spread information intended to harm the rights of certain minorities, their status in society would be detrimental, eventually leading to isolation based on religion, beliefs, or culture.

Social media censorship is a double-edged sword for either of the political parties, whether ruling or not. The ones not in power can easily make allegations that censoring information violates human rights.

Right to information and freedom of expression are everyone’s birthright. Therefore, censorship should only be used when it’s essential ad above all the rights, such as protection of civil rights or national interests.

Final Comments on Pros and Cons of Social Media Regulation

There are several pros and cons of social media regulation. As a result, it's impossible to declare that restriction is either beneficial or undesirable. However, the essential aspect is how the majority of people in a nation feel about the currently related problems.

Meanwhile, everyone wants to stay safe on the internet and wants the truth, also keeping their children away from harmful content. However, it's something to be done individually. It is not necessary to ban individual media platforms or sites at the state level. Each person has discretion over which websites to visit, what news to read, and which privacy software to utilize while surfing the web. 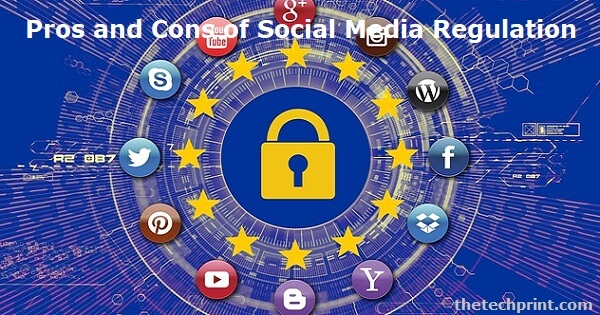 What is Social Media Regulation?

Social Media Regulation is the act of controlling or monitoring social media use by corporations, government agencies, and individuals. This comes in many different forms, but ultimately, social media regulation is about how you manage your online presence. It's about having control over what happens to your posts when you're offline.

Why is Social Media Regulation Important?

It’s one of the significant moves to get unscrupulous elements from spreading chaos in society. Since social media is the easiest way to spread fake news and incite violence, Social media censorship is the right way to deal with the undesirables and protect the public, governments, or individuals from unprecedented harm.

Why should media be regulated?

The globalization of new media technologies is meant to protect cultural diversity in media content while also providing a free public zone with no restrictions.

Should social media platforms be monitored and controlled?

It's critical to monitor social media because they're like flowing rivers of conversation and content. Before they disappear around the corner, organizations need to respond to the conversations and material that flow by. Twitter is the most vivid illustration of how short-lived social media can be.

Why social media usage should be controlled?

According to studies, people who spend a lot of time on social media report feeling more anxious and less great about themselves. Watching the accomplishments and milestones of your friends fly by on your feed doesn't make you happy for them; it makes you unhappy with your own (appearing) lack of success.

Who regulates social media in the US?

The Federal Communication Commission's official website provides information on the rules and regulations for radio stations and their social media platforms. Thus, it is the sole authority that also regulates social media.