Violence in video games has always been a debatable subject. Kids coming of age have lots of things to learn from hunting down zombies to learn shooting enemies as snipers. But what if this virtual stuff shapes into real-life incident? In 2019, 73% of American children aged 2-17 were playing video games, a 6% increase from 2018. In 2019, video games accounted for 17% of children's entertainment time and 11% of their entertainment spending. Globally, the video game industry contributed $159.3 billion to entertainment in 2020. This is 9.3% more than in 2019. There are plenty Video Game Violence Pros and Cons to consider with a number of kids engaging in gaming staggeringly. Let’s have a closer look at them.

What are Video game violence pros for students?

Kids at an early age develop different skills when playing video games. Shooting games add to their cognitive and reasoning skills. With that said, let’s find out other pros of violent video games.

Due to the need for violent video games, gamers must perform specific tasks. This means that games get a lot of practice finding items hidden in maps, cluttered screens, or the background. Their ability to locate difficult things is 30% higher than someone who doesn't play video games as often.

It’s needless to say that teenagers start making more money acing their gaming skills. You can find plenty of games to play with your buddies and make money online. Popular gaming platforms like Steam offer various video games, from warfare to battleground. You can choose any of them and even get help from your teammates. Surprising to know, but that’s one of the main pros of video game violence.

3. They increase a person's ability to think

Numerous studies have shown that people who play video games have sharper minds and better thinking abilities than those who don't. This benefit can be attributed to any video game, even violent ones.

Many violent games today are built on team concepts. To achieve the desired result, you must collaborate with your team members. Although toxic teams can exist, especially for inexperienced players, this design encourages communication skills. Communication is key to strategic thinking, creativity, and problem-solving. All these aspects help gamers achieve success in a group setting.

Video games can help dyslexic young adults. After just 12 hours of playing violent games, their reading speed increases. This advantage includes better word recognition, mobile mental reception, and information extraction skills from written text. Partly this is due to the written and audio instructions included in many games' instructions. The desire to succeed in the game can overcome the obstacles that may prevent you from learning.

What is Video-game Violence Cons?

It’s no surprise that there are more Video Game Violence Cons than there are pros. Violence affects kids in many different ways. And that’s a major concern among parents and society. Here are some of the disadvantages of violence in Games.

1. More Influential than TV or Movies

Events experienced by the player of a violent video game become associated with personal pleasure. Through desensitization, gaming violence can lead to real-world aggression. Studies have found that people who play these types of games tend to be less inhibited and more likely to resort to physical solutions when faced with conflictual situations in their own lives. In addition, the more hours spent playing, the greater the effect.

2. Difficulty in Distinguishing Reality from Fiction

Video game violence may cause children to have difficulty distinguishing reality from fiction. In a study that looked at how different types of games affected kids' perceptions of reality, it was found that those who played violent video games were more likely to view the world as hostile and believe that using force is an acceptable way to resolve conflicts. In addition, they were more likely to see people as untrustworthy and believe that it's okay for them to lie or cheat if it gets them what they want.

3. Imitation of Actions Performed in Games

Because children tend to imitate the behavior of characters they see in games, there's a risk that they may imitate the violent actions they witness in these games. In one study, kids who played a game in which they had to pretend to shoot other characters with guns showed an increase in aggressive behavior immediately after playing.

People who play violent video games tend to be less responsive to real-world violence and are more likely to approve of using aggression to resolve conflictual situations. In addition, they're more likely to see violence as a means of achieving goals and are less likely to believe that their actions will have negative repercussions. Exposure to violence can lead to desensitization and a reduced ability to feel empathy and concern for others.

There are many different types of video games available on the market today. Some of them are more violent than others. It's essential to be aware of the potential Video Game Violence Pros and Cons before allowing your children to play them. Talk to your child's doctor or a mental health professional if you have concerns. They can help you decide if a particular game suits your child. 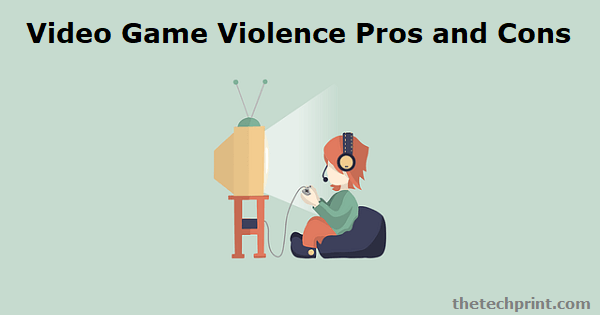 What are the pros of violent video games?

Some people believe that violent video games can have positive effects. These include developing problem-solving and strategic thinking skills, improving hand-eye coordination, and increasing stamina and reflexes.

What are the cons of violent video games?

Violence in video games has been linked to desensitization, increased aggression, and anxiety. Sometimes, it can also lead to difficulty distinguishing reality from fiction.

Are there any benefits to playing violent video games?

While there are some potential benefits, the cons of violent video games tend to outweigh the pros. It’s essential to be aware of the potential effects before allowing your children to play with them. Talk to your child’s doctor or a mental health professional if you have concerns.

What are some risks associated with playing violent video games?

Risks associated with playing violent video games include desensitization, increased aggression, anxiety, depression, and post-traumatic stress disorder. Exposure to violence can lead to difficulty distinguishing reality from fiction. Sometimes, it can also lead to imitating the behavior of characters they see in games.

Is there a link between playing violent video games and real-world violence?

While there is no definitive answer, some studies suggest a link between playing violent video games and aggressive behavior. In one study, kids who played a game in which they had to pretend to shoot other characters with guns showed an increase in aggressive behavior immediately after playing.