Epic Games Store is a digital video game storefront for Microsoft Windows and macOS, operated by Epic Games. It launched in December 2018 and has been a hot topic in the gaming world lately. The store offers direct purchases of games, cloud saves, and an optional subscription service called the Epic Games Store Mega Grant. Some people love it, while others don’t find many reasons to like it. This post dives into the pros and cons of Epic Games Store so you can decide whether to use it.

The Epic Games Store has been criticized for various reasons, including a lack of features, a curated selection of games compared to other digital distribution platforms, and exclusivity deals that timed out or were permanent. Some critics have also raised concerns about the store's potential impact on the video game industry, with some believing that it could lead to increased consolidation among publishers and less competition.

In January 2019, the store was temporarily unavailable in China due to government regulations. It relaunched in the country in May 2020. As of 2021, the Epic Games Store had over 164 million registered PC users.

What are the Pros of Epic Games Store?

It was readily apparent that the EOS platform had a long way to go regarding user-friendliness. It had limited features, controversial and frequently broken designs, and was beset with technical issues that made it inconvenient or impossible for many people to use. But now, it has something good for everyone, from gamers to developers. Here is a look at the Pros of Epic Games Store.

There are several advantages of Epic Games Store over other digital distribution platforms. One of the most notable is its revenue share model, which gives developers a 70% cut of all sales after deducting transaction fees. This is significantly higher than the revenue share offered by other stores, such as Steam, which takes a 30% cut.

2. Curated Selection of Games is one of the Pros of Epic Games Store

The Epic Games Store is a curated selection of games. Unlike other stores, which allow any developer to submit their game for inclusion, the Epic Games Store hand-picks the games it offers. This means that only the highest quality games are available in the store, and developers can be confident that many potential customers will see their game.

Developers who agree to share a portion of their game's revenue with Epic Games can use Unreal Engine 4. This is a significant advantage over other engines, costing thousands of dollars to license.

The Epic Games Store supports Microsoft Windows, macOS, and Linux which is one of the main pros of Epic Games Store. This makes it easier for developers to reach a larger audience, as they can simultaneously release their games on multiple platforms.

The Epic Games Store offers cloud saves, which allow players to save their progress in a game and pick up where they left off on another device. This is a convenient feature for players who want to continue their game on a different platform or simply switch between devices without losing their progress.

What are the cons of Epic Games Store?

A common complaint about the Epic Games Store is that it lacks some games. However, this isn't unique to the Epic Games Store. No online game store has all the great titles. Some are exclusive to other platforms (like Sony PlayStation or Nintendo Switch), and other stores exclusively sell others. So you may end up having accounts in multiple stores to get all the titles you want. Some other cons of Epic Games Store are as follows.

One of the biggest criticisms of the Epic Games Store is its lack of features. Unlike other digital distribution platforms, the store does not offer user reviews, wishlists, or a shopping cart. This makes it difficult for players to find new games and harder for developers to sell their games.

Another criticism of the Epic Games Store is its timed-exclusivity deals. These deals prevent certain games from being released on other digital distribution platforms for a set period, usually around six months. While this gives players who use the Epic Games Store early access to new games, it also means that they may have to wait longer to play these games if they prefer another platform.

Permanent exclusivity deals are another controversial aspect of the Epic Games Store. These deals prevent a game from being released on another platform, meaning that players who want to play the game will have to use the Epic Games Store. This has led to criticism from players and developers, reducing competition and choice in the market.

Some industry analysts have raised concerns about the potential impact of the Epic Games Store on the video game industry. They believe the store's exclusivity deals and revenue share model could lead to increased consolidation among publishers and less competition. This could ultimately result in higher game prices and fewer new titles being released.

5. Unavailability in China is among the cons of Epic Games Store

The Epic Games Store is currently unavailable in China. This is due to the Chinese government's restrictions on foreign companies operating in the country. As a result, Chinese players cannot purchase or play games from the store.

Conclusion on the Pros and Cons of Epic Games Store

The Epic Games Store is shaking up the video game industry. While it’s still early days, it’s important to understand the pros and cons of Epic games Store so you can make an informed decision about whether or not to switch over. So far, the store has been praised for its attractive user interface, generous rewards system, and strong promotion of indie games.

However, some criticisms have been leveled against it, such as its lack of features compared to other stores and occasional server issues. It will be interesting to see how the Epic Games Store develops in the coming months and years and how it impacts the gaming landscape. 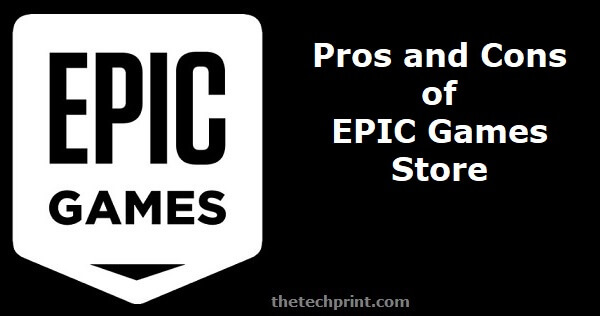 Is Epic Games Store worth using?

When people ask if the Epic Store is worth it, I tell them it's a no-brainer. You're getting games for free, so even if you never spend money at their store, you're still getting a good deal.

Is Epic Store better than Steam?

Both services have similar user interfaces, but if you enjoy customizing things, interacting with the community, and meeting new people, Steam is the place to be on PC. The Epic Games launcher is your best choice if you prefer a minimalist design in terms of the UI.

What is Epic Games Good For?

Can I trust the epic game store?

Epic Games needs improvement, according to most of its customers. People frequently mention issues with customer service, rocket league and tiny tina problems. Out of all the Gaming PC sites, Epic Games ranks 67th.

According to official sources, a free game is available every week on the Epic Games Store. Return often for special savings. Today, download a free game to play or join a free-to-play gaming community.