Pros and Cons of PUBG

The PUBG has received high applauds and responses from the players worldwide and various Game of the Year nominations. There have been several tournaments and events held for this Game since its popularity. However, the high addiction to this video game in the youth has led to its ban in several countries. The Pros and Cons of PUBG put some light on why this game is still being played and it’s not a good one for kids.

PUBG or Player’s Unknown Battlegrounds is one of the most popular online games, with over 1 billion downloads worldwide over the computer and mobile devices. The creator of PUBG is Brendan Greene, who created it following his previous versions based on a Japanese film Battle Royale released in the year 2000. PUBG Corporation developed and published the Game in 2018, which was initially available for Microsoft Windows. Later on, it was made available for Android and iOS devices along with Playstation.

The gameplay is based on a battle scene where up to 100 players in solo or squad mode are made to jump out of a plane and parachute themselves to the ground. They are then required to find weapons, ammunition, safety, and other elements required to save themselves.

The final player or squad wins after killing all the other players and wins chicken dinner; although no chicken is provided, the win is all you need in this game. Since its launch, it has launched various game modes differing in situations and allows you to shop new items and dresses for your game avatar.

What are the Pros of PUBG games according to gamers?

Winning a game gives you a superior feeling, and that’s what you get after playing and winning the battle royale. Here are a few reasons why kids, youngsters, and teenagers love this game.

After playing the game, anyone can get addicted to its powerful graphics and dynamic gameplay. The game is designed to engage people into hours of game time, and people spend hours of their free time on this game. The highly enjoyable features of this are the reason behind its high popularity.

The game can be played in a team, and the players have to survive together to win the game. However, the single-player can win the game alone, but for those who like to work together, it can be a great way to learn teamwork. It involves reviving players and saving them if they are hit and down and work as a team.

The game also allows you to select your team members randomly, and people from around the globe can meet and connect. Anyone can form teams with friends or random people and connect over voice chat which is the most admirable feature of this game.

Many players are using their gameplay to attract people over video apps like Youtube, which allows them to earn from this. So anyone having great skills can become an overnight superstar and have people attracted to their videos or live gameplay to learn gaming skills.

PUBG involves great multitasking skills like finding weapons, saving friends, and killing enemies all together with keeping your focus or being alive. It increases focus and multitasking capabilities, and quick players with these talents can find themselves in the top players.

Some Cons of PUBG- As experts warn

Despite its ban in many countries, the game has a record registered users of 34 million while 16 million users are active every day. The thrill and action may seem breath-taking, but health experts and socialists have a different theory about PUBG.

The major disadvantage of this game is that the youth is so addicted to this game that they spend hours playing it. A lot of cases of deaths and mental issues have been found in youngsters playing PUBG. These reports forced the government to ban its downloads in their countries.

While staring at your smartphone for long hours and keeping focus can be tiring for human eyes and cause vision issues. As most of the players are young, the eyesight issues can cause problems for them in the future. This problem is also associated with people using mobiles, laptops, and television for a longer duration.

Most of the students playing these games are less interested in studies and constantly avoid learning more important things in life. This leads to lesser grades and failure in school and college examinations which affects their prospects of finding a job or living.

As discussed above, the ban resulted from negative health issues found after playing this game constantly without thinking about anything else. The pressure of performing better and living up to other people’s standards can be mentally challenging. Often people are affected by violence portrayed in the game through shooting and killing people after this.

Even if you have a lot of time to waste as in the case of students and young people, the time can be spent on better things learning music, sports, etc. These kids waste hours and even whole days of their time in gaming, which can be used to do better things like playing outdoor sports, which will boost their stamina and health.

Conclusion on Pros and Cons of PUBG

Perhaps for fun, but you have a substantial amount of time to waste on PUBG. As students and young players can spend their time on better things such as learning music, sports, etc. Kids waste hours and even whole days on gaming, which they can use to do better things like playing outdoor sports, which will boost their stamina and health. 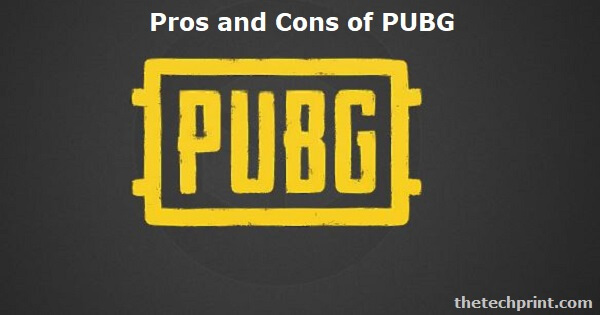 What is the disadvantages of playing PUBG?

Playing for long hours in one place isn't good for your physical well-being. One may become slothful. Staring at a computer screen for lengthy amounts of time can also impact your eyesight and cause headaches.

Is playing PUBG good for brain?

The effects of PUBG and how it can help the brain operate more effectively are examined in this paper. They claim that the game aids in the development of beneficial character qualities, which has been shown to assist with cognitive-behavioural patterns improvement.

How addictive is PUBG?

This is why PUBG mobile game addiction causes brain activity to slow down. Their capacity to comprehend and concentrate fades. According to research, PUBG players' academic performance is plummeting dramatically. People who work are also hooked on this game, according to research.