Why Steam is Better than EPIC Games

The most popular clients for the PC gaming community are Steam and the Epic Games Store. Both services specialize in selling comparable games grouped into categories to PC gamers. These clients also have different features that set them apart, including incentives such as giveaways and game discounts to keep players and developers entertained. But you may wonder why Steam is better than Epic games. Here are some reasons:

Steam has been around longer than the Epic Games Store. This means a larger user base and more game developers are familiar with the platform. This also results in a larger selection of games available on Steam.

Steam offers more features than just a store. For example, you can add non-Steam games to your library and use the built-in web browser. There is also the popular Steam Workshop, where players can upload and share mods for their favorite games.

The Epic Games Store has been known to give away free games regularly. However, many of these free games are older titles that you may not be interested in playing. Steam also has a large selection of free-to-play games available.

User Discounts are why Steam is better than Epic Games

Steam offers discounts on games more often than the Epic Games Store. For example, the Steam Summer Sale is a popular event where gamers can save big on their favorite titles.

There are some things you must be aware of before hitching your ride to Steam:

Some users find the Steam interface clunky and difficult to navigate.

Steam has been known to have slow download speeds, especially for larger games.

Unlike the Epic Games Store, which can be accessed through a web browser, Steam requires that you install the client on your computer.

The Epic Games Store has a better selection of newer games than Steam. This is because Epic pays developers more money to release their games exclusively on their platform.

The Epic Games Store offers refunds for any game purchased within 14 days and played for less than two hours. This is a great feature for gamers who want to try a game before committing to it.

The Epic Games Store can be accessed through a web browser, so you don’t need to install any additional software on your computer.

Some problems which are why Steam is better than Epic games are:

The Epic Games Store has been known to have more bugs than Steam. For example, there have been reports of games not launching or crashing unexpectedly.

The Epic Games Store lacks some of the features available on Steam, such as the ability to add non-Epic games to your library and use mods.

The Epic Games Store offers fewer discounts on games than Steam. Epic relies on exclusive deals with developers to sell their games.

When it comes to digital game distribution platforms, Steam is hard to beat. While Epic Games offers some great features and games, it simply can’t compete with everything that Steam has to offer gamers and developers. With a larger selection of games, better support for modding, more developer control, and lower prices overall, Steam is the clear winner in this matchup. So if you’re looking for the best place to buy and play PC games online, look no further than Steam. 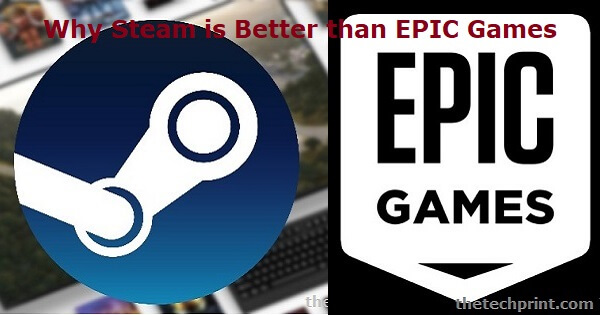 Why is Steam better than Epic Games?

There are several reasons why Steam is considered to be a superior platform to Epic Games. First and foremost, Steam has a much larger selection of games available. In addition, Steam offers more features and benefits to its users, such as frequent sales and a robust community forum. Finally, Steam is more reliable and user-friendly than Epic Games.

What is the difference between Steam and Epic Games?

The key difference between Steam and Epic Games is that Steam has a much larger selection of games available. In addition, Steam offers more features and benefits to its users, such as frequent sales and a robust community forum. Finally, Steam is more reliable and user-friendly than Epic Games.

Why is Steam more user-friendly than Epic Games?

Steam is more user-friendly because it offers users a higher degree of customization and options. For example, you can set up your Steam account so that all of your games are automatically updated, or you can choose to update each game individually manually. You can customize your Steam avatar and use the community forums to connect with other gamers. Epic Games does not offer users as many features or options, making it less user-friendly.

What are the benefits of using Steam over Epic Games?

The main benefits of using Steam instead of Epic Games are that Steam has a larger selection of games, more features, and options, and is more user-friendly. Additionally, Steam is more reliable than Epic Games and often has sales where you can purchase games at a discount.