Pros and Cons of Apple Pay

Apple Pay is a secure and easy-to-use mobile payment system that lets you make payments in stores and apps without ever having to open or carry your wallet. You can also send and receive money from friends & family right in Messages. If you have recently purchased an Apple device, you can use this digital wallets service to send money to others instantly. But is Apple Pay good enough to meet everyone’s requirements? The Pros and Cons of Apple Pay help you find its benefits and limitations and decide whether you should use it or not.

Apple Pay, the mobile payment system that uses your iPhone or Apple Watch to make purchases, is a great innovation and convenience for consumers.

Payments can be made in person using iOS apps, Safari browser, and other methods. It works with the iPhone, Apple Watch, iPad, and Mac. However, you cannot use Apple Pay on an Android device or a browser running on Windows.

Apple Pay is the technology to digitize and replace a credit card, debit card, or chip-and-PIN transaction at a contactless-capable point-of-sale terminal.

New to the App? Visit here to set up Apple Pay Account.

There are Lots of Pros of Apple Pay wallet; with it, you get the benefits of shopping with confidence using your iOS device. It's a secure and simple-to-use mobile payment system that allows you to make payments in stores and apps without ever having to open or carry your wallet or plastic cards. The following are prominent reasons why you should have it on your iDevice.

1. Direct payments from the device

When you use Apple Pay, your iPhone or other compatible Apple devices become your wallet. The idea is simple: instead of pulling out your credit card and typing in all the details, you just have to place your phone near a device equipped with NFC technology.

Your payment credentials are securely encrypted on the iPhone itself, so they never go through Apple's servers or any merchant's system. This way, merchants cannot see or store your credit information.

You don't have to give out your personal information or credit/ debit card number when making payments. Instead, it uses tokenization that only the bank knows what belongs to who. This way, if someone were to hack into the system, they would not use the information.

Apple promises that user data will remain anonymous and secure. On top of that, every time you hand over your iPhone to complete a purchase, it locks automatically after one minute of being idle for additional security.

3. Notifications on your phone

You can keep track of all your purchases made with Apple Pay via iCloud or by checking out "Wallet" in settings on iPhone. This is a handy feature if someone were to steal your credit card info, as you can quickly cancel it.

4. Convenience is one of the commendable pros of Apple Pay

Apple Pay is also an easy and fast way to make payments in stores. Your default credit card(s) will be pre-loaded into the Passbook once you've set up Apple Pay, so just choose which one you want to use. The cashier then scans a QR code displayed on your iPhone's screen (instead of swiping your actual card). It's a great deal of time saved which is one of the significant pros of Apple Pay wallet app.

Apple Pay includes information about your recent purchases, including the tip amount for each individual purchase after it has been made. This allows you to easily leave a tip with a few taps at restaurants that support this feature. So, the next time you forget your wallet while dining at a restaurant, don't worry about the change; your Apple Pay Wallet has the answer to your problem.

6. Apple Watch lets you use the wallet anywhere

In addition to using Apple Pay for purchases on iPhone, there is also the option of use it with an Apple Watch. This way, your purchase information can be accessed from anywhere as long as you have a data connection or cellular network. This is great if you are on vacation away from WiFi but still need to buy something online or in-store.

Considerable Cons of Apple Pay Everyone should know

Many people, both in the private and public sectors, have been grappling with security and privacy issues regarding Apple Pay. This is one of the major Cons of Apple pay, along with some others specified here.

1. It is not widely available

As of this writing, Apple Pay can be used in more than 2 million locations around the globe. But its reach does not come close to that of the established credit and debit card systems. Additionally, keep in mind that it can only be used via iPhone 6, iPhone 6 Plus and Apple Watch.

If you have an older version of iPhones, you cannot use Apple Pay. For iPad users, third-party payment apps such as PayPal are recommended instead of using the system natively.

Hackers have been getting better at what they do, and one of the disadvantages of Apple Pay is that it makes their job a lot easier. Losing your phone or having someone steal it from you can be bad enough news on its own, but losing all of your credit card information along with it adds insult to injury.

3. No rewards points or cash back

Apple Pay does not let you accrue loyalty points or get cashback from your purchases. That being said, it is imperative to note that Apple allows its customers to use reward cards in Passbook via NFC technology. Soon, there may be a way to link at least some types of customer loyalty programs with Passbook for added convenience.

4. Limited availability is one of many cons of Apple Pay

As mentioned earlier, Apple Pay is only widely available in the US and a few other countries, including Australia, Canada, China, France, Hong Kong, Japan and UK. When using the service outside of these areas, NFC limitations will come into play. For example, NFC access is limited to countries in Asia and selections in North America.

5. Apple Pay doesn't have a wide range of applications

Apple pay is only available at certain retailers and some apps, so if you're looking for something to make Apple pay your default payment method everywhere possible, then it's not going to happen any time soon. Till then, you can sure add this pitfall to the list of cons of Apple Pay App.

Apple Pay is a great way to make payments more convenient and secure. It's only available on the iPhone 6, iPhone 6 Plus, and Apple Watch but can be used at over 2 million locations worldwide.

The technology may still be considered new but has grown exponentially in popularity since its release three years ago. So if you're looking for an easier way to pay without pulling out your wallet or card every time, this is it.

The drawbacks of apple pay may seem like a lot but keep in mind they don't outweigh all the pros; there are plenty more good things with this amazing technology. 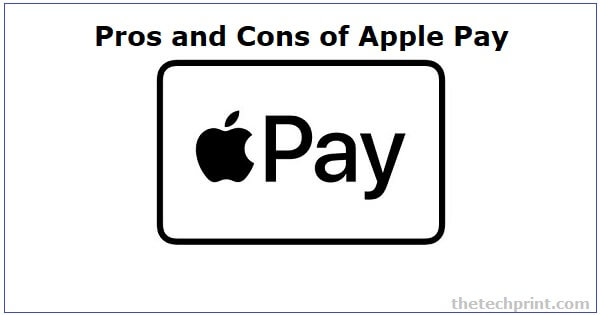 Is there any advantage to Apple Pay?

Using Apple Pay is safer than using a physical credit, debit, or pre-paid card. You'll need to use Face ID, Touch ID, or your passcode for purchases on your iPhone, Apple Watch, Mac, or iPad. Your card number and personal information aren't shared with merchants, and your real card numbers aren't saved on your devices or Apple servers.

Can you be scammed through Apple Pay?

The same risks that come with using any other payment system apply to Apple Pay. Scammers make you send money through Apple Pay so that it appears as if you made the decision yourself.

What are the charges for using Apple Pay?

You'll need an active data plan or a WiFi connection to register. Additional message and data costs may be incurred on your mobile plan and network offerings. Please keep in mind that standard credit card fees still apply to purchases you make using Apple Pay.

How do I avoid Apple Pay fees?

You'll need a debit card that is authorized to send money in order to avoid fees. When using Apple Pay Cash, you have the option of selecting a regular credit card or a debit card from your Wallet after tapping the send button in Messages.