Pros and Cons for iPhone

The iPhone has been one of the most popular devices on the market since it was first released in 2007. According to the latest stats, there are over 1.2 billion iPhone users worldwide. iPhone has a 50% market share in the US smartphone industry, with iPhone 13 being the top-selling smartphone. Many things make the iPhone so appealing to users, but there are also some drawbacks that should be considered. This definitive ganders at the prominent pros and cons for iPhone users and how iOS is yet to make its mark on the global market.

What are the Pros for iPhone users?

The iPhone has a lot to offer users with a massive app store, constant updates, and a user-friendly interface. The different pros for iPhone users are as follows:

The iPhone is the best smartphone if you own other Apple devices, such as MacBooks, Apple Watches, or iPad Pro. Connecting two devices is simple and very practical. This is handy if you move files or photos from your phone to your laptop or vice versa. Apple iOS and macOS have progressed to the point where you can start a film on your phone and finish it on your computer.

One of the remarkable pros for iPhone users is that you know you're getting a well-made product. Apple uses materials like aerospace-grade aluminum and ceramic shield technology to ensure their phones can withstand some wear and tear, plus they're water resistant for up to 30 minutes.

Android smartphone models come from various manufacturers, so their build quality can differ significantly. Apple, on the other hand, is always consistent in releasing high-quality mobile products year after year.

3. Smooth UI is one of the pros for iPhone Users

Another reason the iPhone has remained popular is its simple and user-friendly interface. One of Apple's smartphone's selling features is the ease with which it can be used.

The iPhone maintains a consistent and straightforward experience for new users across all its versions since Apple devices operate in an isolated ecosystem. Even though each new iPhone has more sophisticated capabilities, iOS does not reinvent the wheel with each update.

One of the best things about owning an iPhone is that you can regularly count on Apple to release software updates. This keeps your phone current and gives you access to new features, security patches, and bug fixes.

While other manufacturers also release software updates for their Android phones, it's not as consistent as with iPhones. With over 2 billion active Android devices, it's difficult for Google to push out timely updates to all users. As a result, many Android users are stuck using outdated software versions no longer supported by their manufacturer.

Thanks to Apple's closed ecosystem, keeping users safe from digital intrusion is a lot easier. While Android supports numerous manufacturers across its platform, it has a higher risk of a security breach. Another advantage of using the iPhone is that cyber criminals focus on items with the largest market share.

Due to its expansive market share, Android is a more common target for cybercriminals. iPhone apps are limited in their ability to interact with other parts of the phone while running because of something called "sandboxing." This makes it difficult for malicious code to cause damage even if it's present on the device. iPhones also have some of the strongest encryption technology available, which includes features like Secure Enclave and AES Engine.

What are the cons for iPhone users?

The iPhone is not perfect, and there are a few drawbacks that users should be aware of. Here are some of the cons for iPhone users:

One of the biggest complaints about iPhones is that they're expensive. The latest models depending on the configurational requirements (iPhone 13), can cost upwards of $1,000, which is out of reach for many consumers. And because Apple doesn't offer any payment plans or financing options, you have to pay the full price upfront if you want the newest iPhone.

2. Not as Customizable as Android

Another downside to owning an iPhone is that you can't customize it as much as you can with an Android phone. With iOS, you're stuck with the default app layout and organization. You also can't change the look of your home screen or install third-party widgets.

One of the most frustrating cons for iPhones is that they're only available in limited storage options. The base model comes with just 64 GB of storage, which isn't enough for power users who need to store a lot of data on their phones. And if you want more storage, you have to pay a premium price for the 256 GB or 512 GB models such as iPhone 13.

4. Restricted use of Apps outside of the Apple Store

These limitations are sometimes justifiable if an app presents a potential security risk. Still, it also necessitates users to go through an often time-consuming procedure to acquire applications outside the Apple store. If you want to download a third-party application that you believe is superior to Apple's version, for example, you'll need to go around the app store and complete several stages and workarounds. At the same time, the iPhone actively works against this.

5. No Headphone Jack is one of the considerable cons for iPhone

The computer revolution began in the 1980s, but it was the iPhone that took it to a new level. Apple made several questionable decisions along the way with the iPhone, including eliminating the headphone jack. People may use headphones or earbuds with a headphone jack to obtain high-quality sound.

However, when the iPhone no longer offered a headphone jack, Apple instead promoted their wireless earbuds called AirPods. The only other choice for users was to plug earbuds into the charging port that also provides audio--but using this would prevent charging while in use.

For comparison, Android smartphones still have an audio jack that doesn't require a special accessory to listen to music or streaming entertainment discreetly and simultaneously charge your phone.

If you want to use all of the features that an iPhone has to offer, you'll need to buy a variety of expensive accessories. For example, the Apple Pencil is required for drawing and taking notes on the iPhone, but it costs an additional $99. You'll also need to buy a special case that supports wireless charging if you want to take advantage of that feature, which can add another $40-$50 to the cost of your phone. The overpriced load is one of the major cons for iPhone users.

Are iPhones worth the cost? The answer to that question really depends on your needs and preferences as a consumer. iPhones are certainly not for everyone – plenty of Android users love their devices just as much (if not more) than iPhone fans do. But if you want a phone with great features, top-of-the-line technology, and a fantastic app selection, the iPhone is definitely worth its high price tag. 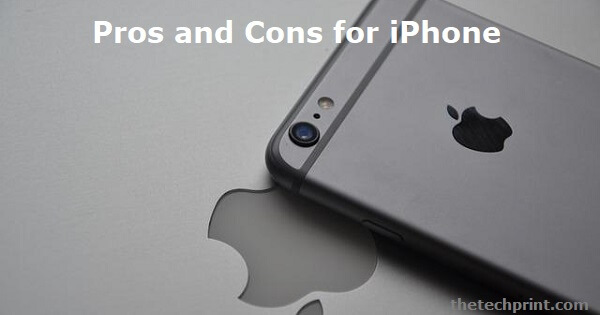 Are iPhones better than androids?

The processors in iPhones are faster and better-performing than those commonly found in Android phones. Furthermore, Apple designs its hardware and software to work together seamlessly, making the iPhone more efficient overall.

Which is safer iPhone or Android?

Is it good to switch from Android to iPhone?

Which is easier iPhone or Android?

If you're unfamiliar with technology, iPhone is a great phone to start with because the hardware and software design creates a user-friendly experience.

How long do iPhones last?

According to statistics from the company, Apple's iPhones may have a three-year lifespan. However, many users report a drop in performance after two years.