Before jumping straight to the Pros and Cons of Facebook Messenger, you should know some facts about it. The instant messenger app is the best tool to stay connected with your social network without opening your Facebook account. The app is downloaded by more than a billion users, which gives you another reason to try it. Finally, if your communication occurs through the internet, you sure can enjoy audio calling, video calling, and texting via FB messenger for free.

Facebook Messenger made its entry into the market as Facebook Chat being a standalone chat app in 2008. An app is still a trustworthy tool recognized as one of the best messenger apps for iOS, Android, and Windows users. Billions of users exchange pictures, videos, stickers, audio, and documents via Facebook messenger every day. Its custom features make it stand out from the rest.

Supporting all the operating systems, Messenger is an easy-to-use tool to get in touch with your friends, family, associates, and clients. The best part about Facebook messenger is that you can communicate easily by color-coding your chats, checking the timestamps, and reading receipts. Here are some noteworthy pros of Facebook messenger app, which billions of happy users like.

Facebook Messenger requires an internet connection, so there's no additional fee for using it. In fact, you can chat with anyone from anywhere as long as they have a smartphone and are connected to the internet.

Facebook Messenger is much faster than text messaging, which can be delayed when too many users are in the same area using it at once. Facebook Messenger uses data instead of texts, so you don't have to wait for your messages to go through.

What makes it even faster is the separate chat head available for every user, so you know who's texted you; you can reply to them from your device’s homescreen.

3. Ease of use is one of the commendable pros of Facebook Messenger

It's a no-brainer; Facebook Messenger is easy to download and sign in, plus it requires no additional information other than your phone number. All you have to do is open the app on your smartphone, create a profile if you don't already have one or find another user who has added their contact details into Facebook Messenger already, then send them a message. You can also send a photo, video, or voice message quickly and easily.

4. You can use Facebook Messenger to make free calls

This is a great money saver if you and your friends and family members don't already have an app like Skype installed on all of your devices. All you need to do is open the Facebook Messenger app, click "video call" or "voice call," then choose who you want to talk to. Money saving benefits of Facebook messenger are worth noticing when you are living abroad and have friends and family members to call often.

5. You can use Facebook Messenger to send and receive money

This is a great way of sending your friends some pocket change while they're at college or giving your spouse some cash for groceries when you get paid this Friday.

All you need to do is add the payment method that works best for you, such as PayPal or debit card, then type how much you want to send and it's done. The Facebook Messenger pay service lets you easily transfer money via a secured channel.

Some Cons of Facebook Messenger App you should know

A few disadvantages come along with using Facebook Messenger, but they aren't very major unless their server is down. The advantages far outweigh the drawbacks of this app, so if you continue to use it for your personal or business communications, then most likely, these won't even be an issue for you.

You can sign up for an account using your email address or phone number, but the only way you're able to use Facebook Messenger is if you already have an active page on their website. If this isn't something that's ok with you, then there are other free messaging apps available in app stores worldwide.

2. Dependency on the Internet is one of the common cons of Facebook Messenger

Facebook Messenger is only available for smartphones, so if you don't have one or your smartphone isn't compatible with it, you won't use this app. If you don't have a smartphone or an internet connection, other messaging apps work on both devices and desktop computers.

On the 4th of October 2021, Facebook had a technical glitch that brought all its services Instagram, Facebook Messenger, and Whatsapp, to a halt. The problem caused a stir among users who rely on social media networks for business or personal communication. As per the reports, this downtime lasted for hours.

Beware of such cons of using Facebook Messenger; it’s technology, after all, which can break down any second. The best solution to such problems it finds Facebook Messenger Alternatives like Telegram (personal) or Skype for business.

4. FB messenger is available in English Only

Right now, Facebook Messenger is only available in English, so if you don't read or speak it, then this app isn't for you. Other messaging apps support multiple languages and dialects, though.

5. It can quickly drain your Phone’s battery

If you have it on your phone, be aware that it will take much of your storage. Facebook Messenger runs in the background to get you an instant notification about active conversations. The continuous activity is a sure and short way to drain your device’s battery. Provided it requires internet connectivity to operate; battery discharge rate may stagger in areas where connectivity is poor.

Final Say on the pros and cons of Facebook Messenger

Should you or shouldn’t you use it? Assess some of the pros and cons of Facebook Messenger App provided here and compare them with alternatives. This is sure a handy tool to communicate with your peers, friends, and family. You can save a lot on calls and messaging if your carrier charges more for that. If your carrier costs you more for mobile data, you should consider restricting using your data accordingly. 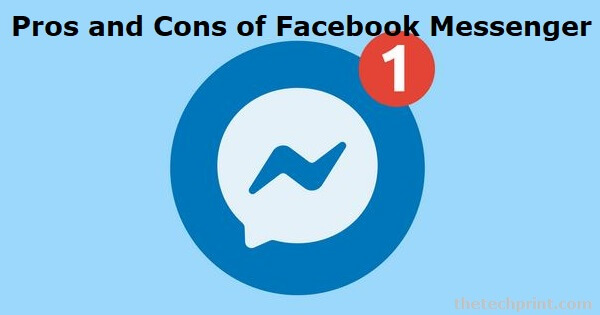 One advantage is that it lets you connect with friends and family while also saving money by connecting directly with businesses, like ordering food or buying movie tickets. Another benefit of the app is that it allows for text-based facial expressions, a unique form of communication.

Can anyone see my messages on Messenger?

According to Facebook, Messenger uses the same secure communications protocols as banking and shopping sites. In addition, the messages are end-to-end encrypted, so not even Facebook can access them.

Why you should not use Messenger?

Facebook has announced that it will make Messenger end-to-end encrypted, raising concerns that child abuse may go unaddressed on the platform. Zak Hoffman, a cyber-security expert who works for Forbes, wrote in an article titled 'Why You Should Stop Using Your Facebook Messenger App' to avoid Messenger.